Four and a half years later, a full criminal justice account of the 2011 Stanley Cup Riot in downtown Vancouver has been released detailing the extent of the emergency response, damages to property, and how suspects were convicted under the criminal justice system.

“Notwithstanding the high-profile and public attention these cases attracted, the Riot Prosecution Team did precisely what is expected of an independent Prosecution Service: they remained impartial; took a fair and principled approach to each case; and, working co-operatively with police, they kept their focus,” reads a letter in the report created by the B.C. Ministry of Justice and Attorney General.

Over a period of five hours on the evening of Wednesday, June 15, 2011, just before the end of the Vancouver Canucks’ home loss in the Stanley Cup Playoffs, rioters took over the streets of downtown Vancouver, specifically within the Central Business District.

The riot began at the West Georgia Street public viewing area, next to the old Canada Post building, where an estimated 55,000 people had gathered to watch a live screening of the game. Another 100,000 people were gathered in areas surrounding the live screening.

A total of 1,035 emergency response personnel were deployed to the downtown peninsula, including 928 police officers from both the Vancouver Police Department and other local police agencies, 63 Vancouver firefighters, and 44 paramedics. The report states that St. Paul’s Hospital dealt with 250 emergency room visits overnight whereas Vancouver General Hospital recorded just 15 emergency room visits during the same period.

The financial impact of the riot has been pegged at $3.78 million, which includes: $525,000 in costs incurred by the City of Vancouver, B.C. Ambulance Services, and St. Paul’s Hospital; $540,000 from civilians; and $2.7 million from damage done to businesses. 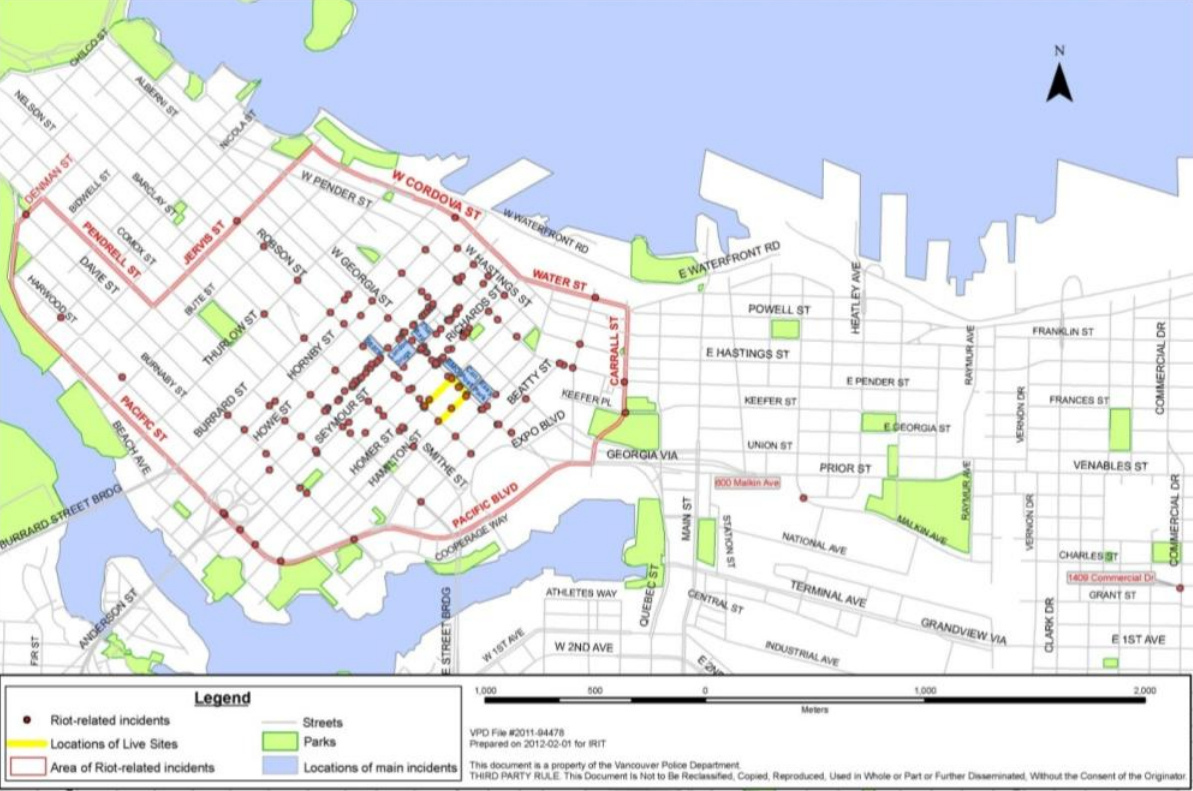 There were 297 ‘discrete riot’ incidents across a three square kilometre area of the downtown peninsula:

Two businesses were particularly hit hard by rioters: London Drugs on West Georgia and Granville reported losses of $1 million while Hudson’s Bay across the street had losses of more than $1.4 million.

The report revealed that employees at London Drugs feared for their safety and hid inside a small windowless office in the store’s basement. It was similar case at Hudson’s Bay where employees found shelter on the top floor of the department store building.

More than 5,500 hours of video footage was examined, in addition to 30,000 photos taken by both press and civilians, many of which were posted onto social media.

To process the evidence, investigators contracted the services of the International Law Enforcement and Emergency Services Video Association in Indianapolis, Indiana to examine all the photos and videos. It was the only video lab in the content able to review and process the volume of video evidence.

“Any single rioter could, and many did, commit multiple criminal acts at multiple locations,” reads the report. “Evidence of those criminal actions was effectively hidden, like a needle in a haystack, in multiple exhibits taken by various videographers. It would have taken an investigator almost three years simply to view all of the video once.”

Following the processing of evidence, a website was created for the public to assist with the identification of the riot suspects, which ultimately resulted in 1,000 statements from so-called “recognition witnesses”.

A total of 912 charges were made against 300 alleged rioters, including 54 individuals that were youths at the time of the riot. Of the adults that were convicted, 47 per cent received a jail sentence and another 47 per cent were given house arrests.

An extraordinary 500 days of court time were required to trial and sentence the accused rioters.

“Hopefully, this prosecution will deter – even prevent – the reoccurrence of events like the 2011 riot, as those who would riot and commit other crimes under cover of a crowd now know they do so at their peril,” the report notes.

Taxpayers spent about $5 million to process the rioters through the criminal justice system.

The report explains the seemingly slow pace of the process to bring the Vancouver rioters to justice, compared to the expedited system that was established to bring order during the England riots of August 2011.

“In England, there was a continuing and serious spread of criminal behaviour that had to be quickly extinguished so as to restore civil order to large parts of London and other communities,” says the report.

“The rapid spread of the disorder throughout London and other communities in England required a rapid response from the Criminal Justice system in order to reassert order.”

Furthermore, English police had immediate access to the nation’s dense network of CCTV infrastructure and had the trained staff to quickly deliver evidence to carry out arrests. In contrast, investigators in Vancouver depended on submissions from civilians and the media, which was delayed by nearly half a year due to a Supreme Court of B.C. petition by local media outlets.