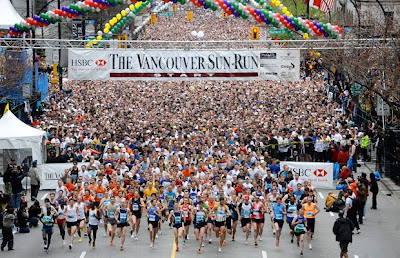 The 2010 Vancouver Sun will take place Sunday, May 9 at 9am. This year event organizers expect close to 60,000 participants in what is the largest road race in Canada and second largest in North America. For us locals, make note of transit changes and road closures.
The current route of the race begins on Georgia Street in downtown Vancouver, with the starting line just west of the intersection of Burrard Street, and ends outside BC Place Stadium after guiding runners through the downtown peninsula and parts of the Kitsilano and Fairview neighbourhoods south of False Creek. The run organizing committee hires numerous entertainers to perform along the route and in the stadium at the end of the race, including local humour/cover band The Neurotics, who have played at the starting line every year since 1995. [source]
VancityBuzz.com