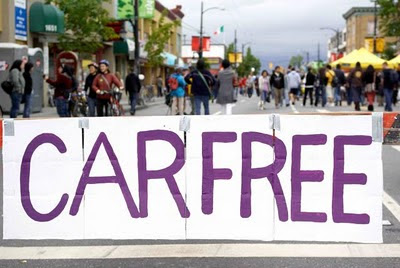 Image: InsideVancouver.ca
On June 20th, 2010 the City of Vancouver will be hosting 4 simultaneous car free day festivals in four different parts of the city. There are  two going down in East Van, one in the west side and one in the downtown peninsula. Each bring with them a unique flavour.

The first annual Car-Free Vancouver Day, on Sunday June 15, 2008 ushered in the next phase in this bold experiment that had been gradually happening in Vancouver for many years. It took the car-free meme to the whole city, and represented the next level in our evolution toward healthy communities, authentic cultural celebrations, and car-free streets. On that day, FOUR communities presented their own Car-Free Festivals: Kitsilano, West End, Main Street, and Commercial Drive. Each Festival was envisioned and organized by the local core organizers, and each had a unique flavour. [source]