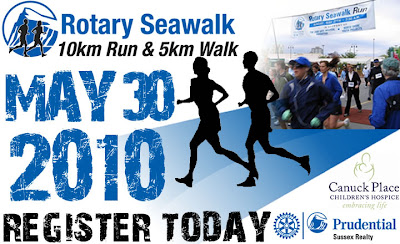 The 2010 West Vancouver Rotary SeaWalk Run will take place May 30th with proceeds going to Canuck Place Children’s Hospice. Many thanks to Richard (@mozy19) for telling me about this event. The run takes you on a journey along West Vancouver waterfront of English Bay. The course starts at The Village of Park Royal South, and goes down a trail along the Capilano River through Ambleside Park and along the length of the scenic Centennial Seawalk to the turnaround at Dundarave pier.
Time: 7:30am
Date: May 30th, 2010
Start/End Point: The Village at Park Royal South.
Parking: Free parking will be available during the period of the run at Park Royal.
Breakfast: A runner’s breakfast will be waiting for you at the finish line

Run Gear: An original design T-shirt is included in the race package along with stuff from Running Room, Canuck Place as well as other great stuff.

Awards: Awards will be presented from 8:45 onwards