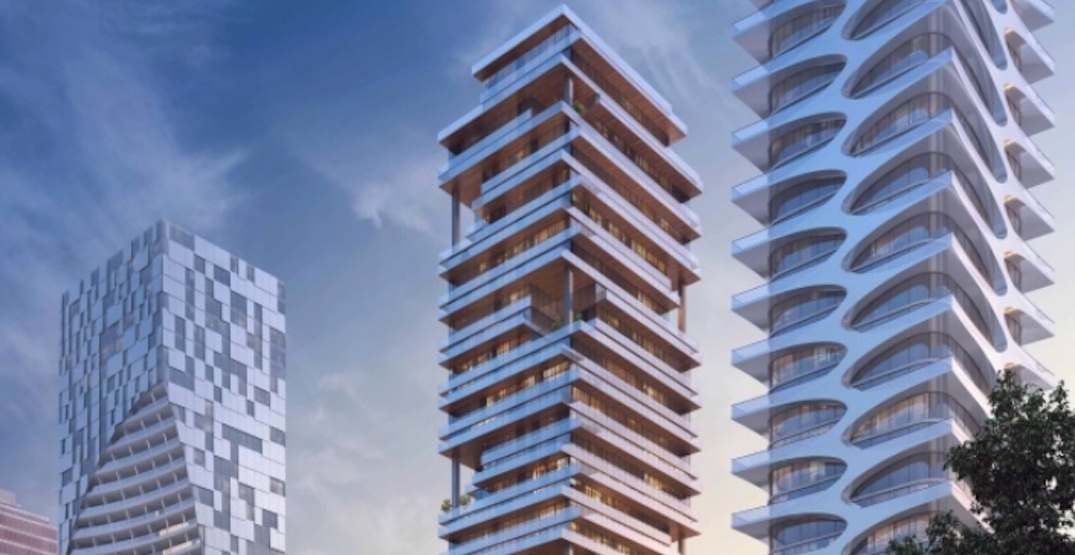 There are now new details and illustrations of the proposal to build a new mixed-use residential tower on the site of 1640-1650 Alberni Street in downtown Vancouver’s West End neighbourhood, on the edge with Coal Harbour.

Earlier this year, developers Landa Global Properties and Asia Standard Americas held a pre-application open house for the project, which seeks to demolish a 1969-built, 15-storey building with 66 rental units and three levels of office.

The site is located mid-block between Cardero Street and Bidwell Street, just across from the West Georgia Street development sites of the White Spot restaurant and the former Chevron gas station, and next to the 43-storey Alberni by Kengo Kuma and near Revery Architecture’s 39-storey exoskeleton tower.

The proposal calls for a new 385-ft-tall, 43-storey tower with a five-storey podium to create 197 market condominium units and 66 replacement market rental homes.

Although it does not create a new peak in the skyline, the building seeks to be an architectural standout in an area that is already clustered with some of Vancouver’s most unique designs.

It is designed by the San Francisco office of Skidmore, Owings & Merrill (SOM), which is the same architectural firm responsible for the designs of some of the world’s most significant buildings, including Dubai’s Burj Khalifa and New York City’s One World Trade Centre Freedom Tower. The architect of record on the project is IBI Group. 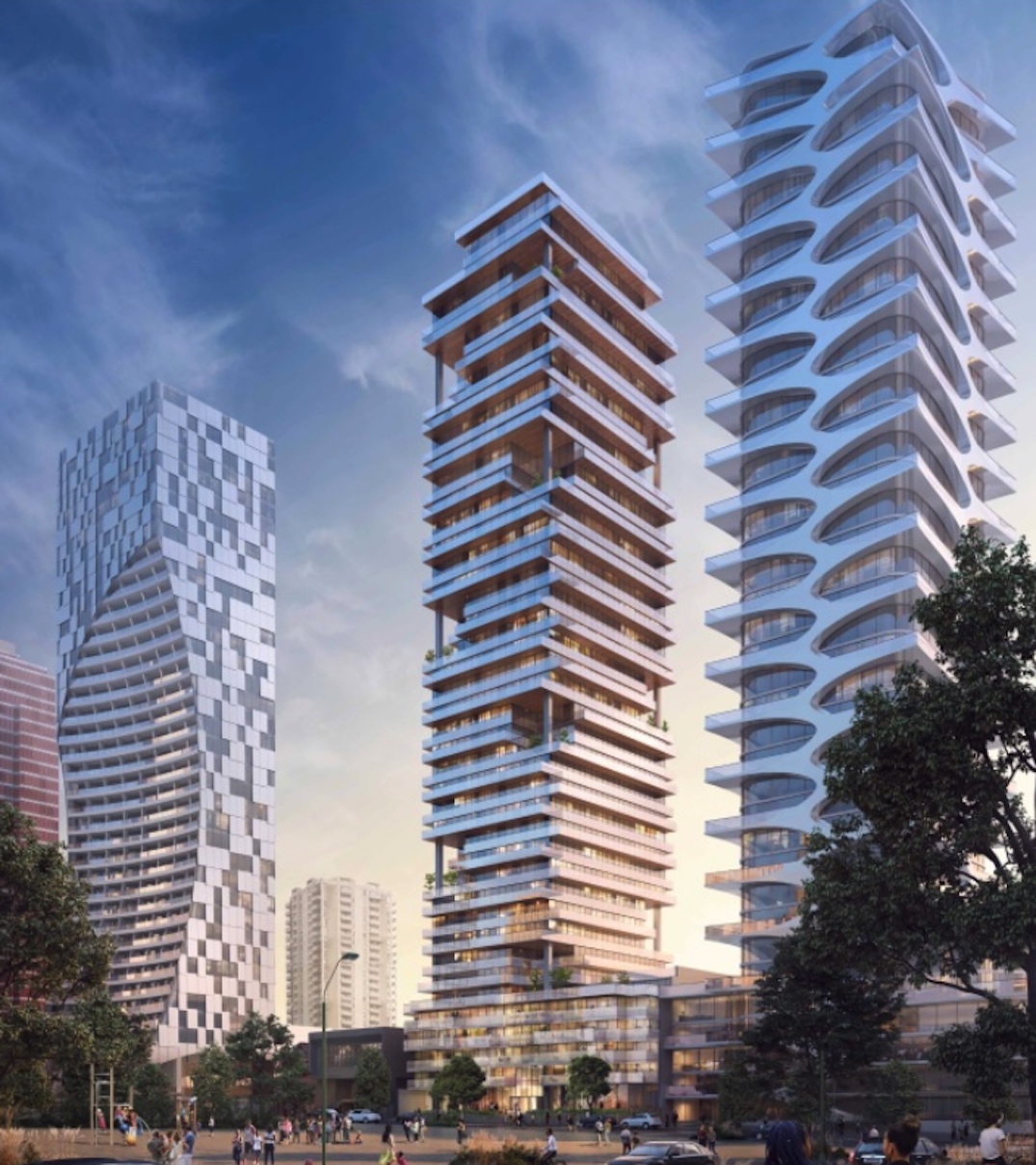 Although generally rectangular in shape, the tower calls attention to its irregular pattern of stacked floor plates that protrude and form cavities. This concept is further enforced by the system of protruding balconies.

“As a unique, thoughtful design, the proposal has the potential to become a new landmark on the Vancouver skyline. The design of the building has been carefully considered to contribute to Vancouver’s skyline and preserve views of the North Shore mountains,” reads the project description.

“The proposal contributes to the public realm with urban design considerations and landscaping to create an attractive and comfortable environment for all those using Alberni Street.” 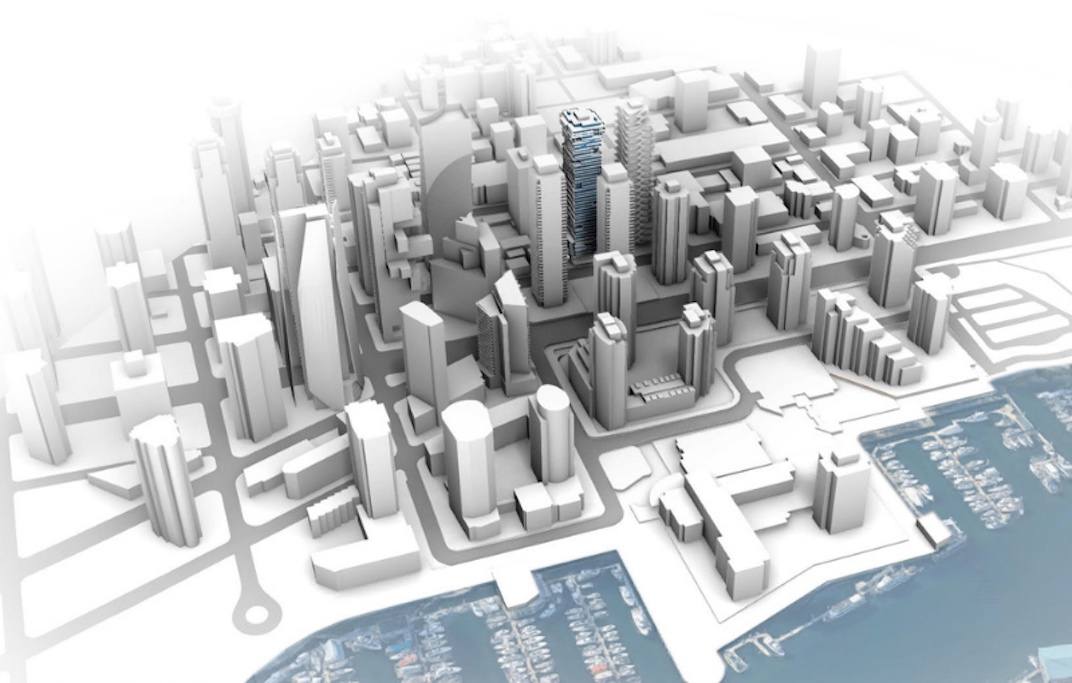 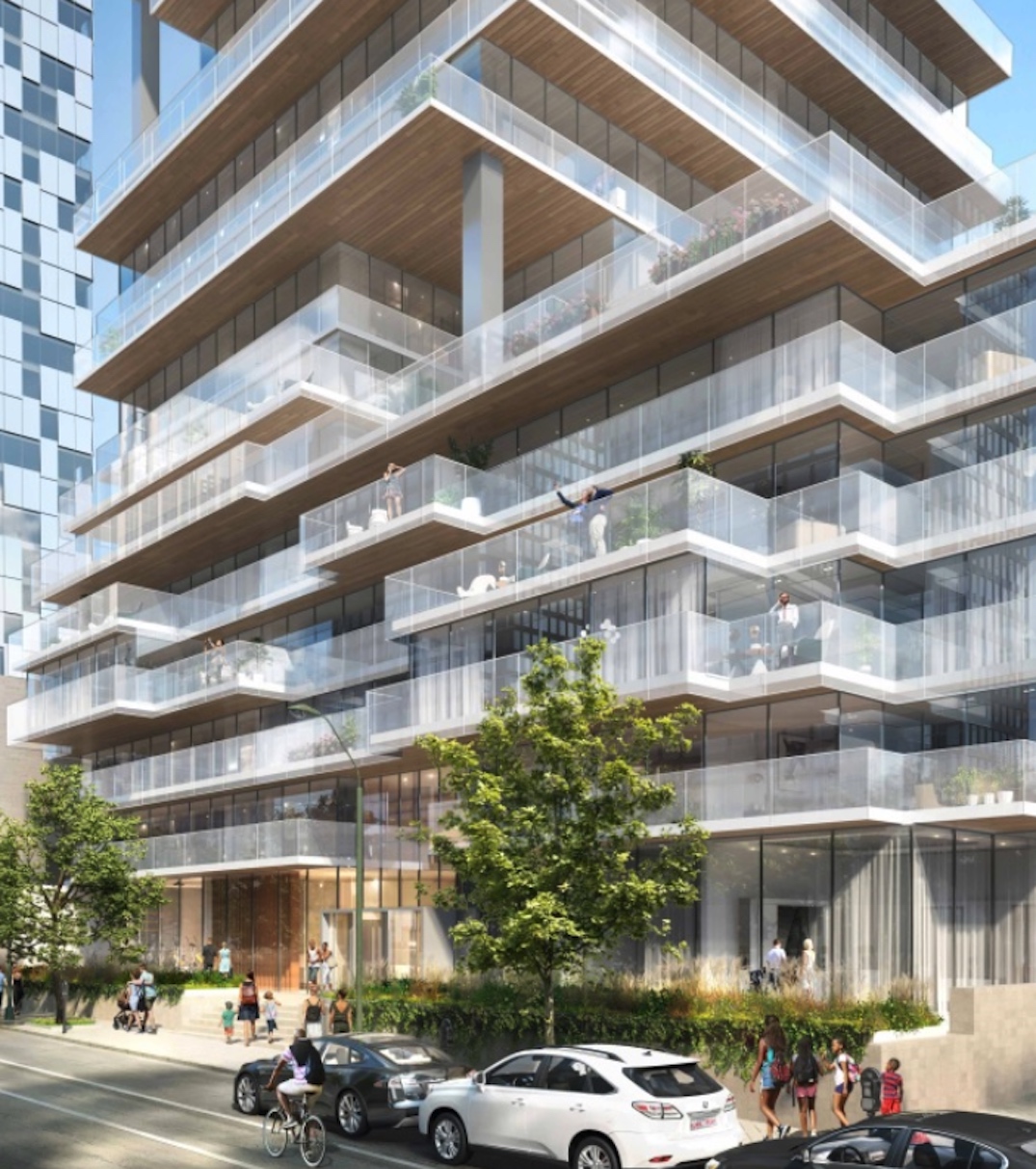 The proposal, permitted under the city’s West End Community Plan, is aiming to follow the Green Building Policy for Rezonings pathway to a low emissions building. It will also provide tenants of the existing rental building with protections and compensations, as stipulated by the municipal government’s 2019 Tenant Relocation and Protection Policy.

At this time, no formal rezoning application has been submitted to the municipal government.

Up until 2018, the property was owned by Hollyburn Properties, which proposed to construct a 42-storey tower with 276 rental homes. Hollyburn Properties made a decision to withdraw this rental housing proposal as they were unable to come to an agreement on the level of community amenity contributions (CACs) with the City of Vancouver.

“It was largely approved, but there was a hiccup in the negotiations with the CACs that Hollyburn was unable to come into an agreement with the City,” Hollyburn Properties spokesperson Olivia Brown told Daily Hive in 2018.

“And after that, the City decided that the highest and best value for the property would be to build luxury condominiums.” 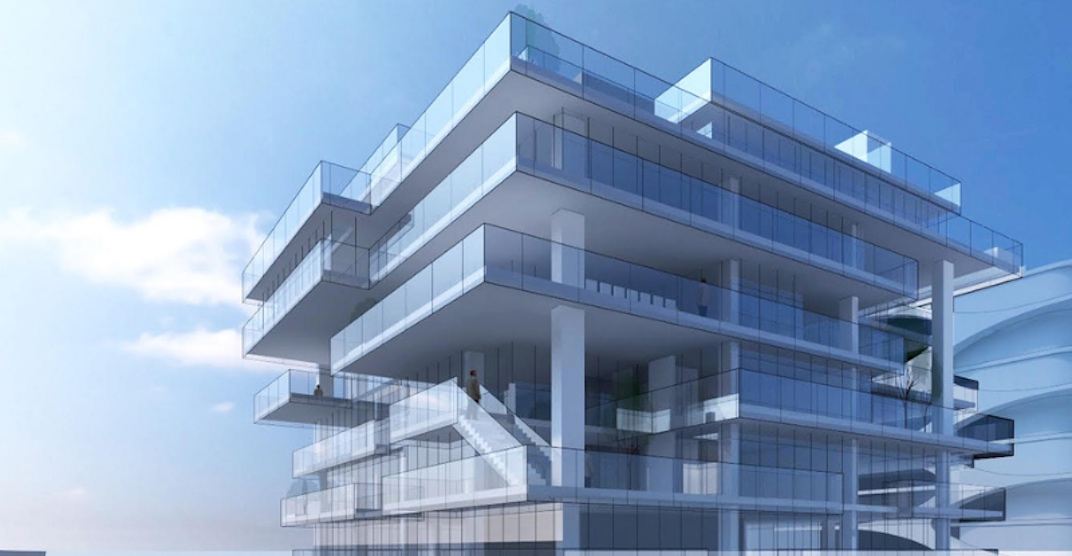 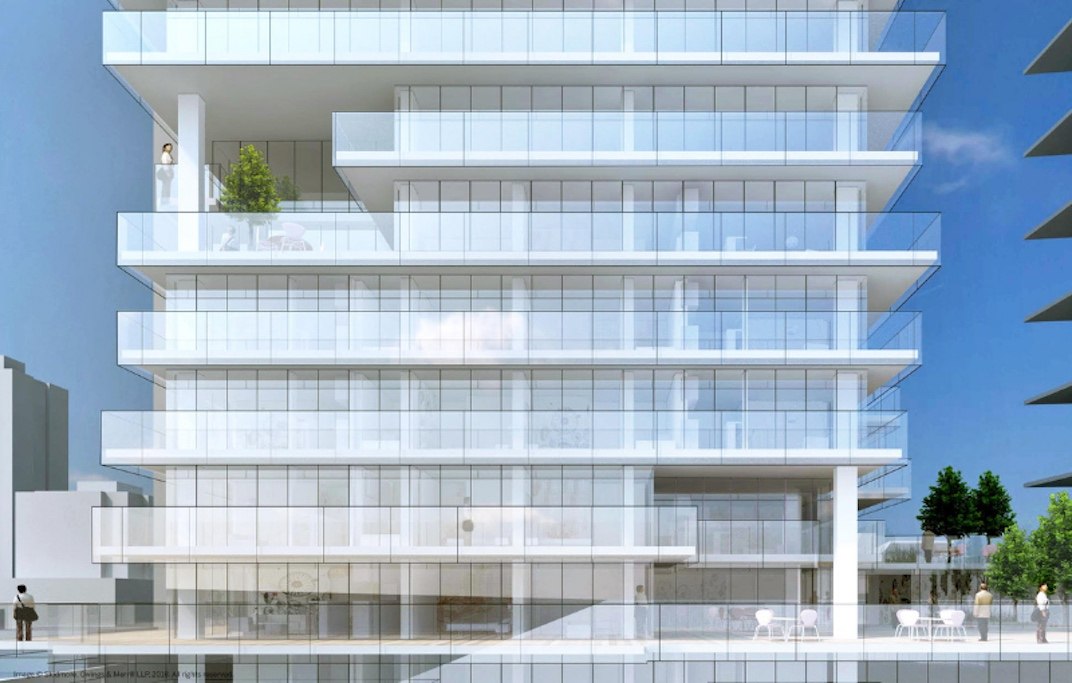 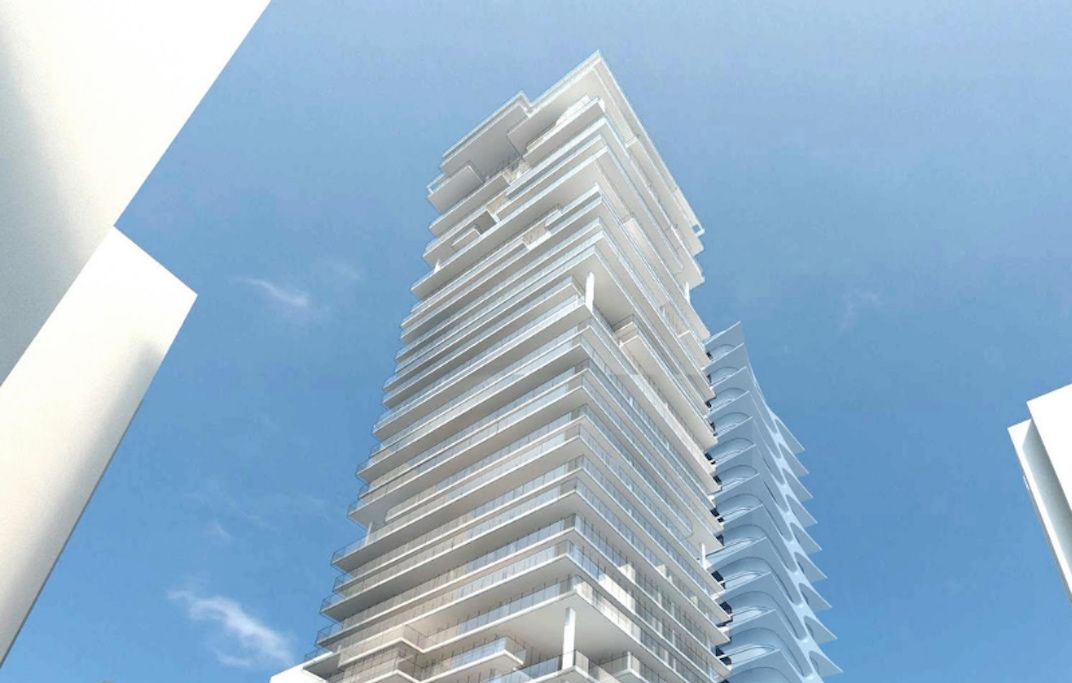 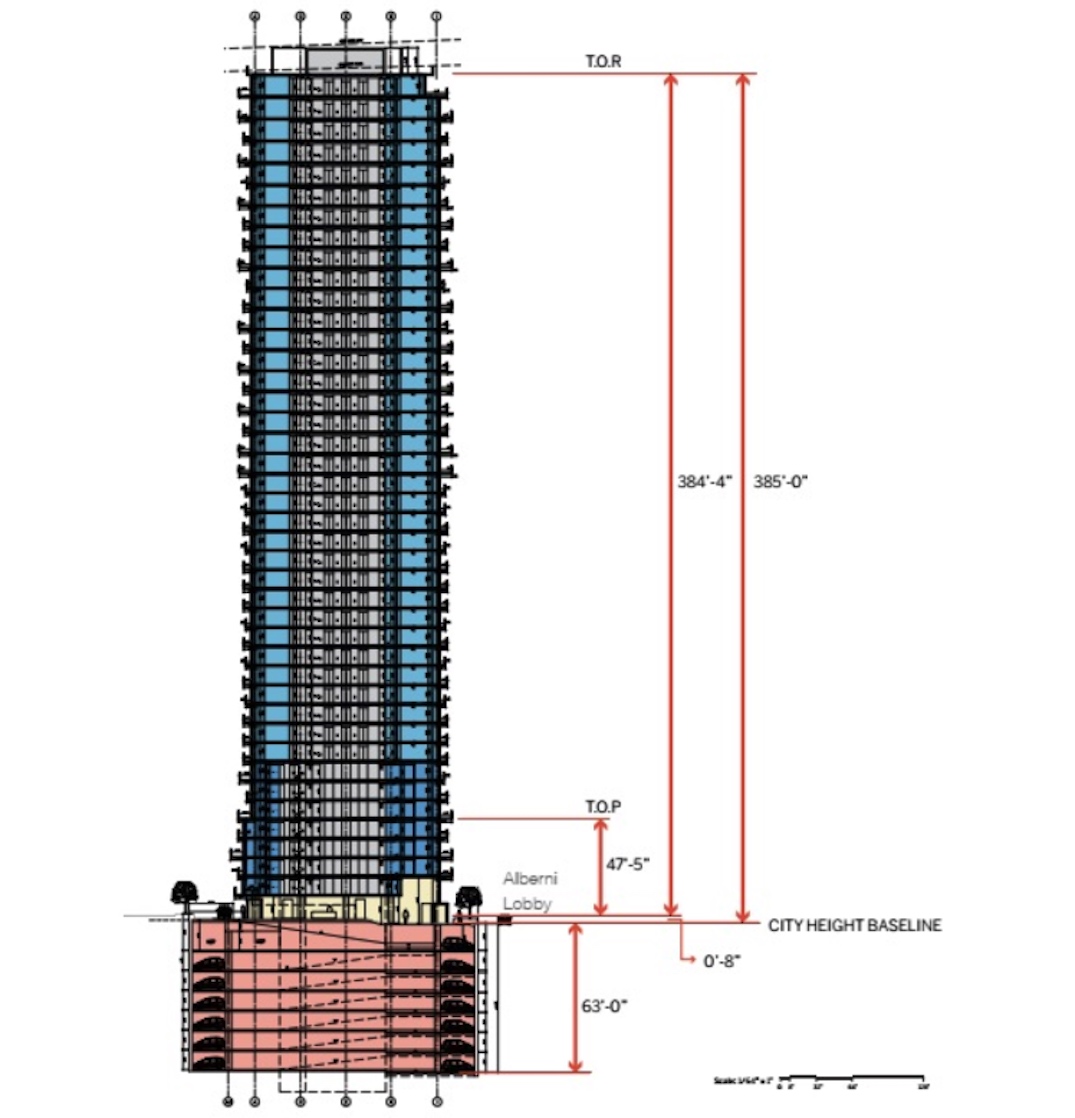