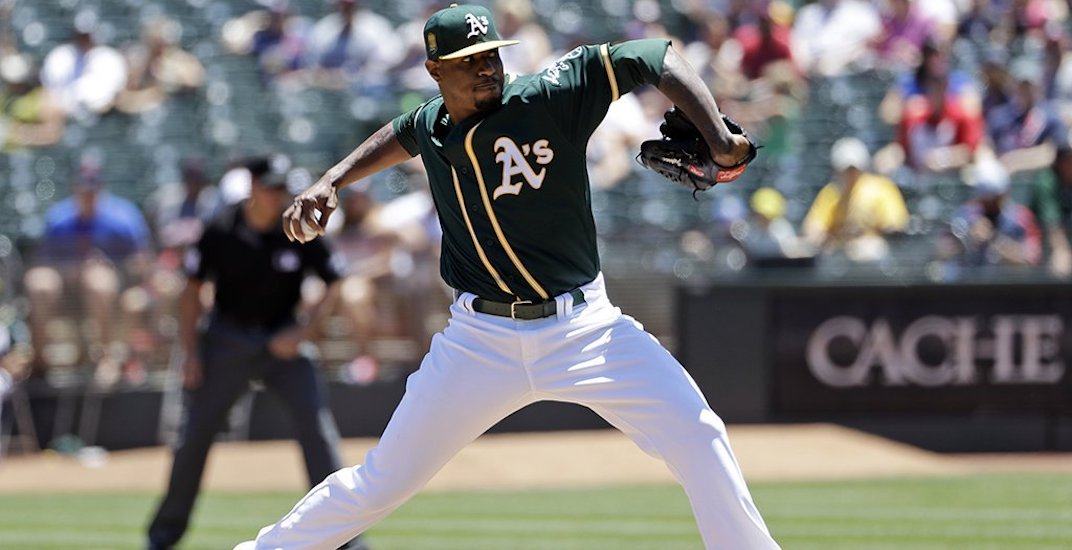 When Edwin Jackson takes the hill for the Toronto Blue Jays Wednesday afternoon, he’ll set a Major League record. The Blue Jays will be the 14th franchise he’s played for, the most of any player in baseball history. It’s a weird baseball oddity for this ultimate baseball nomad who’s played anywhere and everywhere over his 16-year career.

Surely, Jackson has a story or two to tell from all his years in the majors and all the people he’s played with over the years. In honour of the Blue Jays being Jackson’s 14th team, here are 14 oddities from his MLB career.

When you play for 14 teams, you’re going to have a tonne of teammates. Jackson has played with 771 different teammates over his 16-year big league career. Once he steps foot on the mound in San Francisco, he can add another 24 names to that list, bumping it close to 800 teammates total.

Hey, it's former Blue Jay, Edwin Jackson! He was a Blue Jay for all of 2 hours on July 27th, 2011. pic.twitter.com/oufUFsDoGI

When Jackson dons his Blue Jays uniform tonight, it will actually be his second tour with the Blue Jays. On July 27th of 2001, he was a Blue Jay for all of two hours before being traded to the St. Louis Cardinals.

According to the team’s official tweets, they announced the trade for Edwin Jackson at 12:26 pm on July 27th. At 2:36 pm that very day, Jackson was on the move again to St. Louis.

Jackson has the distinction of throwing the most pitches ever in a no-hitter. His 149 pitch effort ranks highest among all no-hitters and his eight walks were a big contributing factor to his extremely high pitch count.

4. Has a World Series Ring from 2011 with Cardinals

Since he bounced around to half the teams in MLB, chances were Jackson would win a World Series ring eventually. He won a World Series as a member of the St. Louis Cardinals in 2011.

5. He was there for Bryce Harper’s MLB debut

On April 28th 2012, Jackson witnessed history as one of the most highly touted prospects in MLB history made his official debut. Jackson was there in the dugout when Bryce Harper played his very first game as a member of the Washington Nationals.

Jackson posted the best numbers of his career in 2009 with the Detroit Tigers, finishing the season with a 3.62 ERA in 33 starts with 161 strikeouts. His first-half numbers were especially impressive; a 2.52 ERA in 18 starts. Those stats earned him a spot in the 2009 All-Star Game, the only Midsummer Classic appearance of his career.

7. He was traded along with Octavio Dotel, who has played for the second-most teams in MLB

What are the odds of this? The two players who have played for the most teams in MLB history — Jackson and Octavio Dotel — were packaged together by the Blue Jays and traded together to the St. Louis Cardinals at the 2001 trade deadline.

By the time he reached free agency at the end of the 2012 season, Jackson was ready for his first big-money contract. His patience paid off in the form of a four-year/$52 million deal from the Chicago Cubs in January of 2013.

Prior to signing Jackson as a free agent, the Cubbies finished dead-last in the NL Central with a 61-101 record. Jackson was the team’s biggest free agent signing of that offseason.

The Cubs may have had a bit of buyer’s remorse after year one of their contract with Jackson. He came out and posted an 8-18 record, leading the league with 18 losses in 2013.

If for some strange reason you own an Edwin Jackson jersey, you own one of the ten different uniform numbers he’s adorned over the years. Number 36 seems to be his go-to as he’s worn that uniform number with six of the 14 teams he’s played with.

11. Among active pitchers, he has the 2nd most wild pitches and 2nd most errors as a pitcher

It must be incredibly difficult for a professional sports player to “settle down” and feel comfortable when they could be traded at any given moment. Jackson was no stranger to being traded and was dealt away five times over the span of three years from 2008 to 2011.

At 35 years old with 16 years of experience in Major League Baseball, there are a lot of miles on Jackson’s arm. How many, to be exact? He’s thrown 32,045 total pitches in the big leagues, with 478 of those pitches happening in the playoffs.

Given his age and the sheer number of pitches he’s thrown, it’s a miracle that Jackson’s arm hasn’t fallen off at this point. Not only has it remained intact, but he can still throw gas at 35 years old.