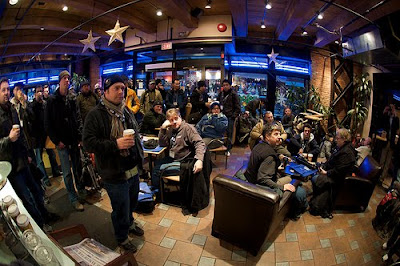 We’ve all felt the lure of digital images and the instant gratification that comes from a preview screen. Okay maybe not all of us have, but those that hold a camera or aspire to take that one great photo have. Anyways… how fleeting is that high before it’s followed by that familiar emptiness that draws you to snap another shot? Composition and lighting are thrown to the wind and quality photos are but a distant memory. Snapoholism is rampant in today’s age of shiny point and shoots, but there is now a creative way out of the cycle of excessive snapping!

The 12×12 step program (i.e. the marathon) is for everyone. Equipped with nothing but a 35mm camera and a marked roll of film with only 12 exposures, snapoholics will be given 12 randomly drawn themes to interpret and capture on film. The first will be revealed at 8am with subsequent ones released at the top of every hour for 12 hours. Themes will be as varied and broad as the imagination and snapoholics will be given carte blanche to interpret them. There are no do-overs so only serious rehabbers need apply.

12×12 will help recreational and professional photographers alike clean up their act. Snapoholics will remember once again that careful planning before execution can generate the quality of photography that all those treasured prints in albums on living room shelves possess. The lasting natural euphoria that comes from pure artistic freedom untainted by the likes of Photoshop will be a revelation.
Negatives will be developed and judged after the marathon, the results of which will be revealed in a public exhibit in the grand halls of the Vancouver Photo Workshops on October 16th, 2010 at which time prizes will be awarded to the best prints. The winning entries will then be elevated to the gallery walls of the Vancouver Lookout for an extended showing to local and international photo enthusiasts.
ON SUNDAY SEPTEMBER 12th, SIXTY PHOTOGRAPHERS WILL ONCE AGAIN CONVERGE AT BLENZ YALETOWN TO LAUNCH THIS YEAR’S 12X12 VANCOUVER PHOTO MARATHON

12×12 is open to anyone with a 35mm film camera. Tickets ($24) must be purchased in advance, include film, and will go on sale at 8pm August 12th. Tickets are now sold out! Updates can be found at VancouverPhotoMarathon.com.