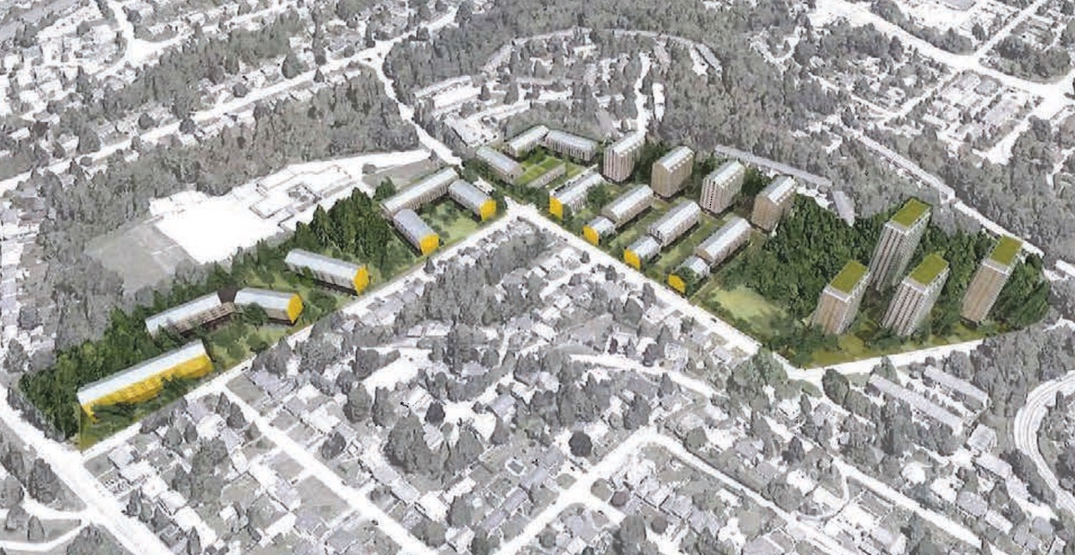 Another major redevelopment proposal is in the initial review process with the City of Port Moody, with the potential to result in a markedly elevated increase in the municipality’s total population, which currently hovers at approximately 35,000 residents.

On behalf of Edgar Development, a rezoning and official community plan amendment application has been submitted by Brook Pooni Associates to redevelop Woodland Park at 1030-1190 Cecile Drive — a 23.4-acre site just north of the intersection of Clarke Road and Cecile Drive, currently occupied by 19 buildings constructed in the 1960s containing 200 townhouse units.

The property is about a 30-minute walk or five-minute drive from Moody Centre Station, which is served by SkyTrain and the West Coast Express. 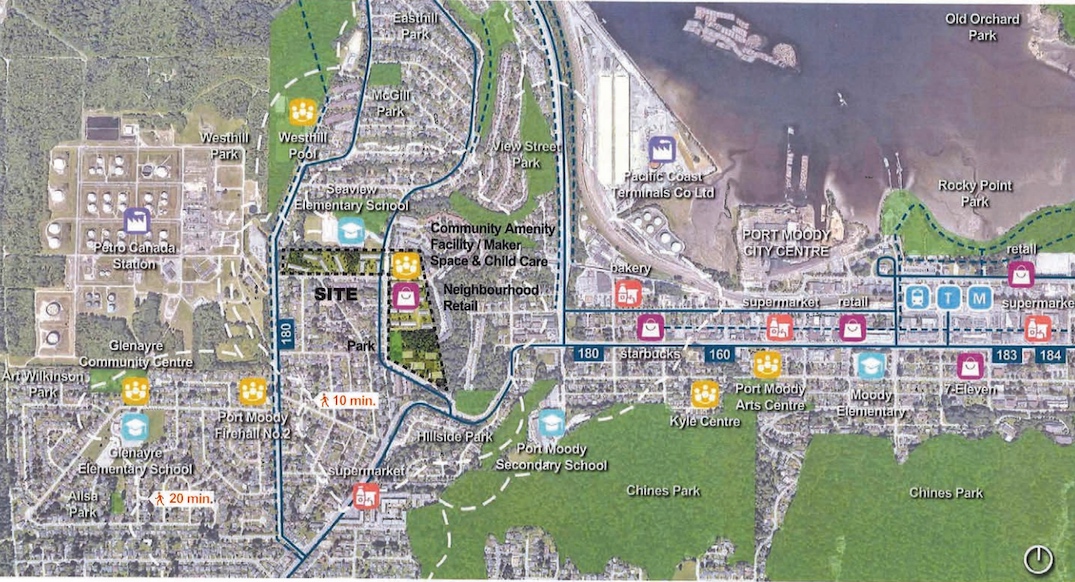 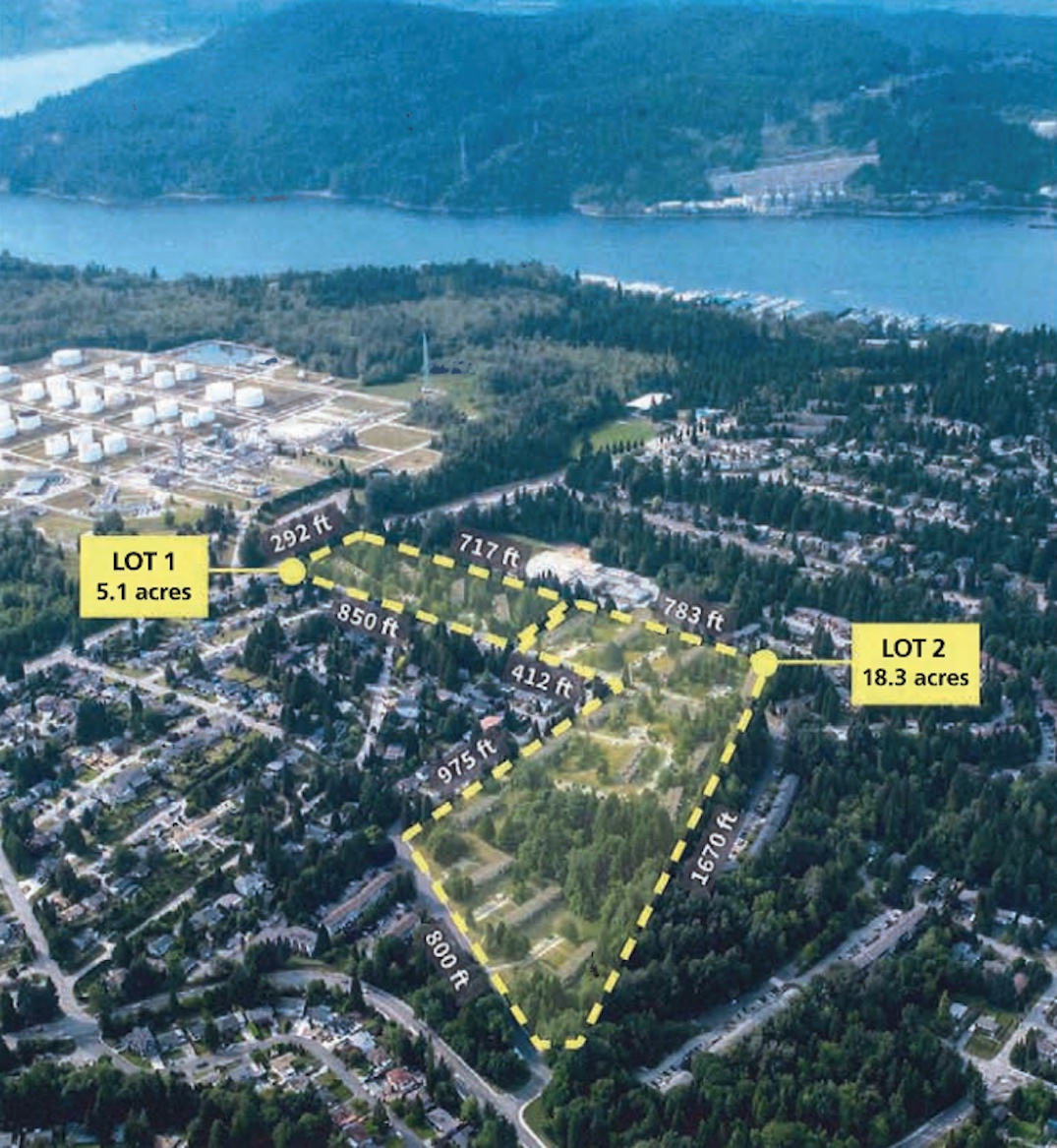 The proposal, designed by Acton Ostry Architects, calls for a complete redevelopment with 2,344 homes, including 325 units dedicated as below-market rental homes in partnership with BC Housing. The remainder of the homes will be condominiums.

The residential component is contained within 18 buildings, ranging in building height types of four to six storeys, 12 storeys, and 18 to 26 storeys. The taller buildings will be located within lower elevation areas of the site to reduce impacts on adjacent low-density development and views from the surrounding area. 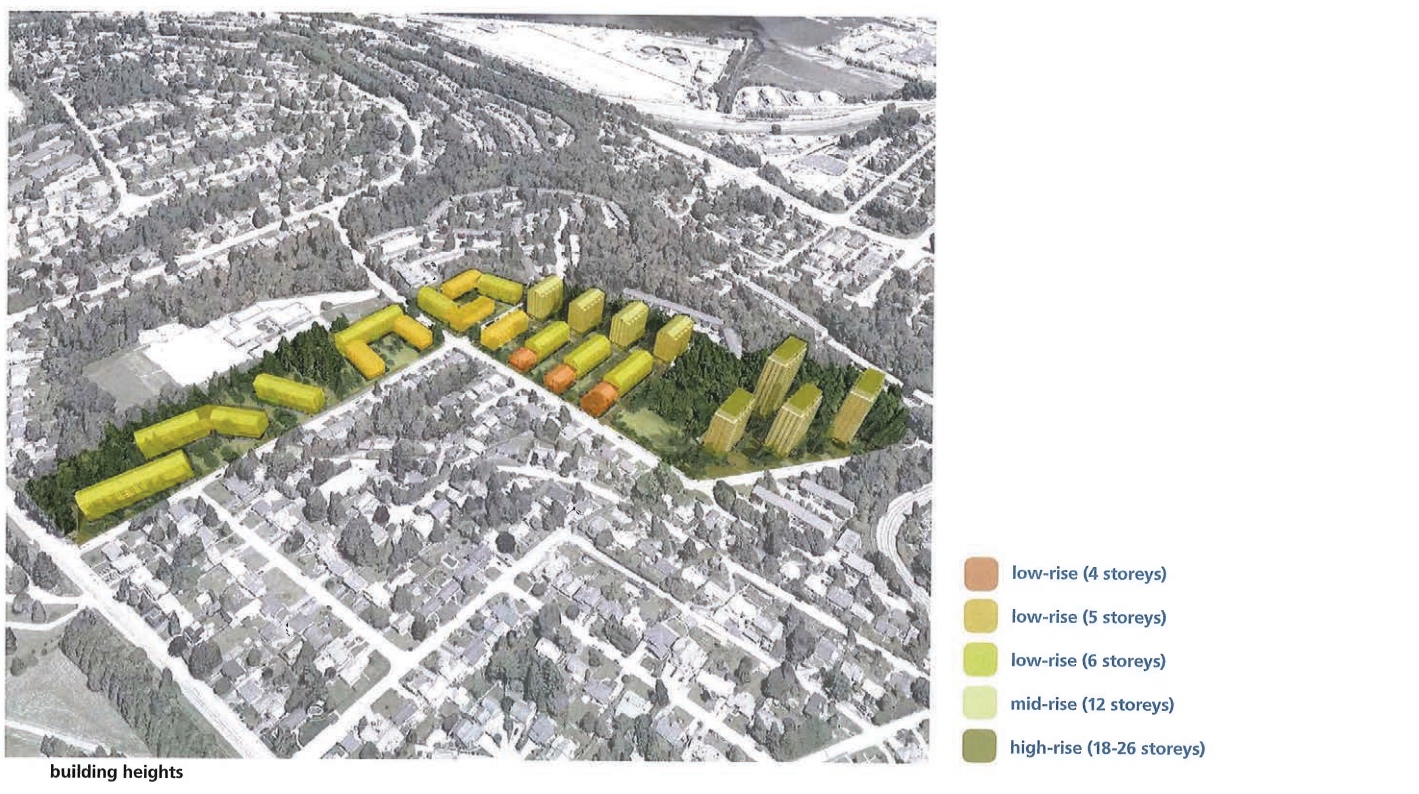 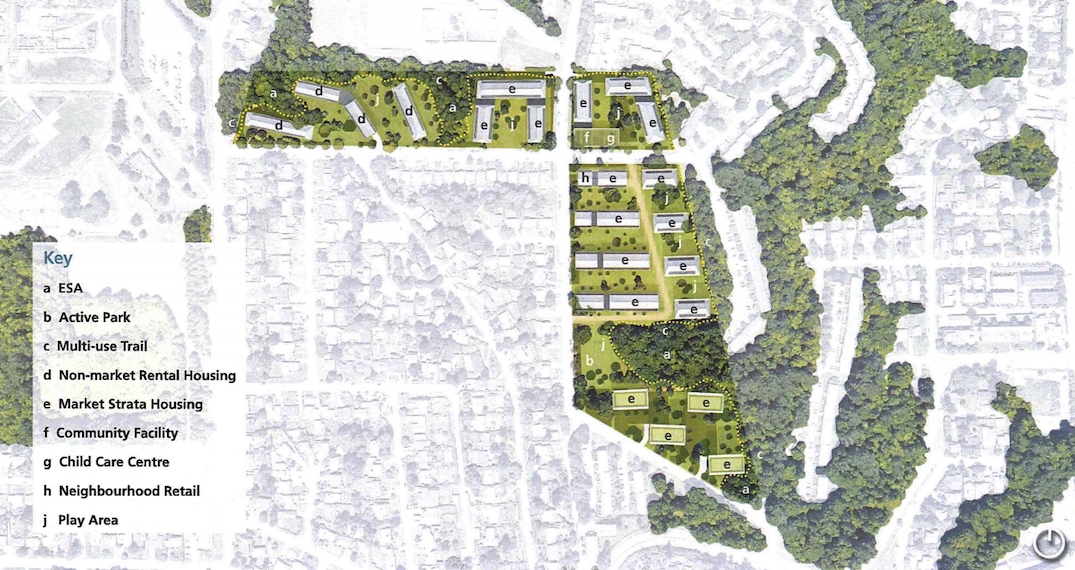 Two of the buildings will have mixed uses, containing about 10,000 sq. ft. of community amenity space for childcare, and 5,000 sq. ft. for neighbourhood retail such as a cafe and small grocery store.

The redevelopment’s first phase will contain a significant portion of the non-market rental housing component, as well as the replacement housing for existing tenants.

“In the first phase of the program, the existing tenants within the site to be redeveloped by BC Housing will be relocated to available units on the east side of the site in order to facilitate the redevelopment of those buildings,” reads a city staff report.

“In the second phase, the existing tenants will be given first right of refusal to move into the new non-market housing. Those that choose to leave rather than relocate to the new housing will be provided with compensation in accordance with Council’s Policy. The strategy results in greater than a 1:1 replacement of existing units and is intended to minimize tenant disruption and displacement.” 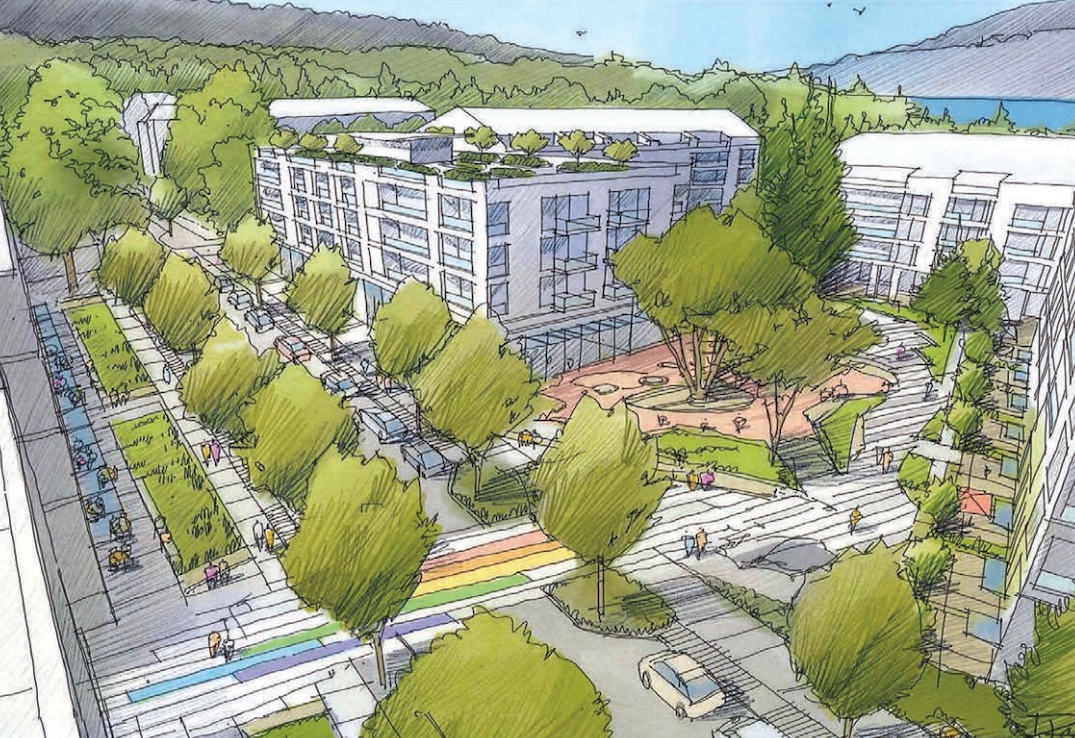 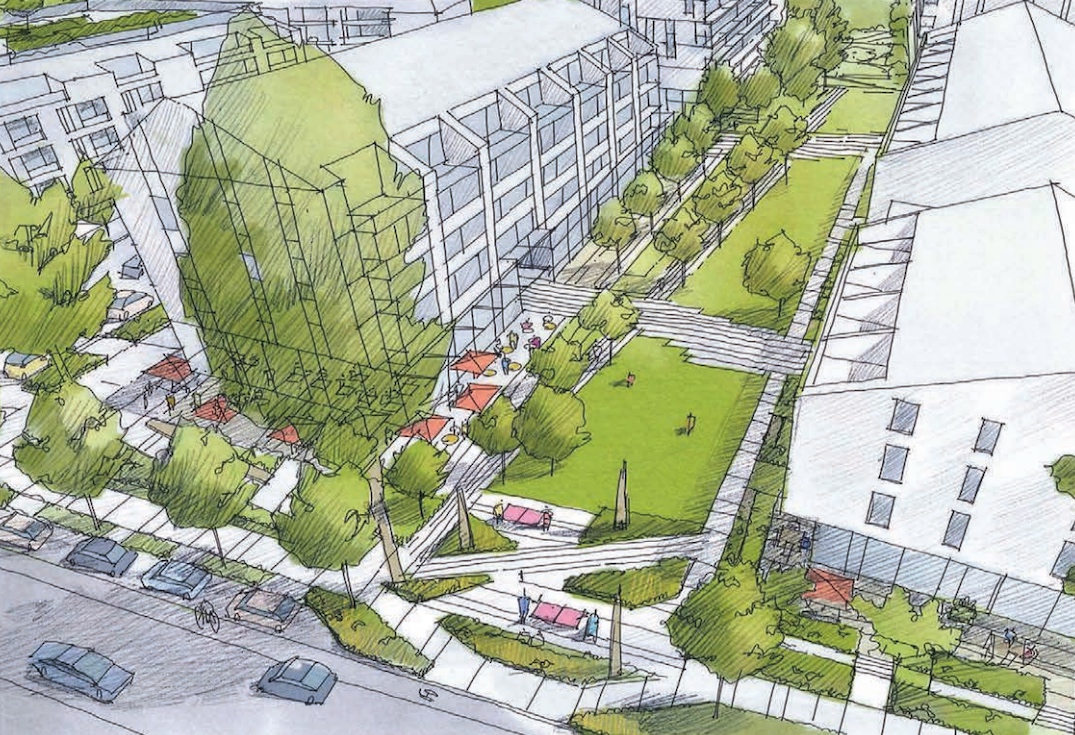 If all goes as planned, there will be a total of seven construction phases over a timeline of about 16 years, with the first phase reaching completion in 2024 and the last phase in 2036.

The entire redevelopment will create a total floor area of 2.217 million sq. ft., providing the project with a floor area ratio density of 2.15 times the size of the lot. Approximately 3,100 vehicle parking stalls will be located underground, which represents a reduction of the municipality’s parking standards.

The proposal is aiming to set aside 16.5 acres — 70% of the site — for enhanced, remediated, and protected environmentally sensitive urban forests and streams, and open green spaces and multi-use public parks. 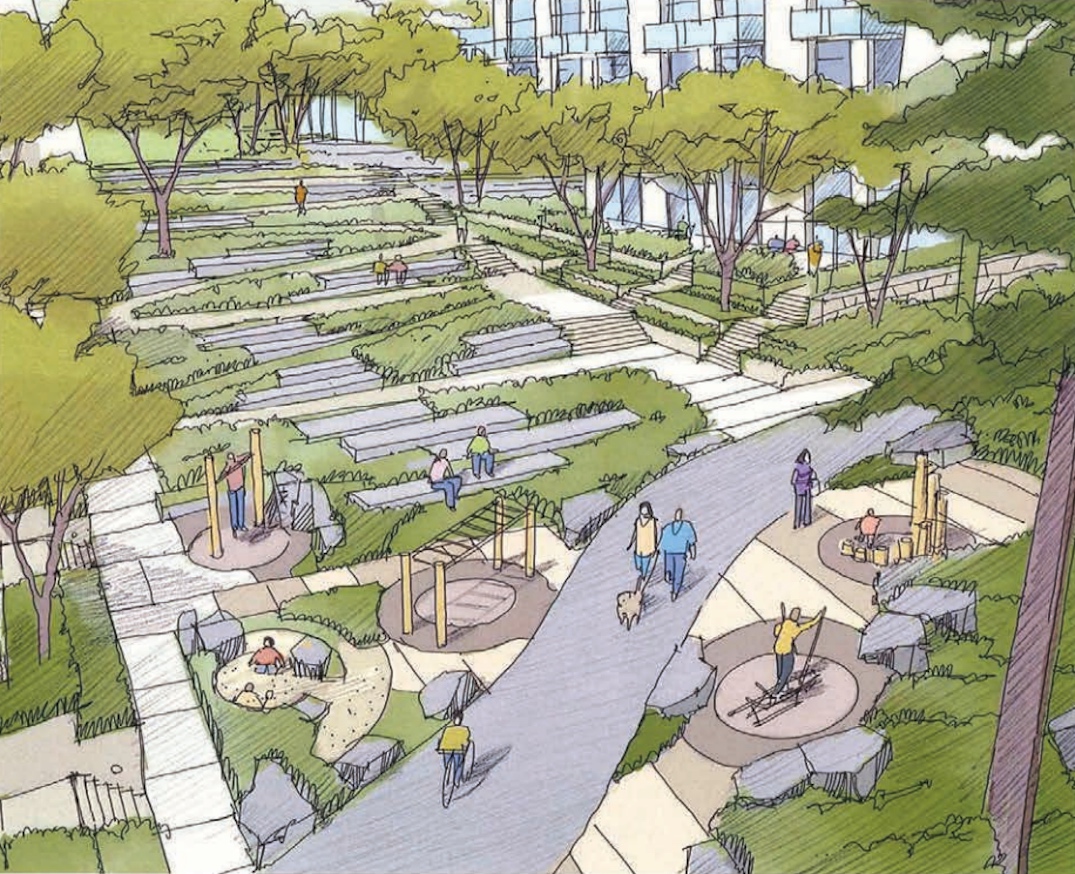 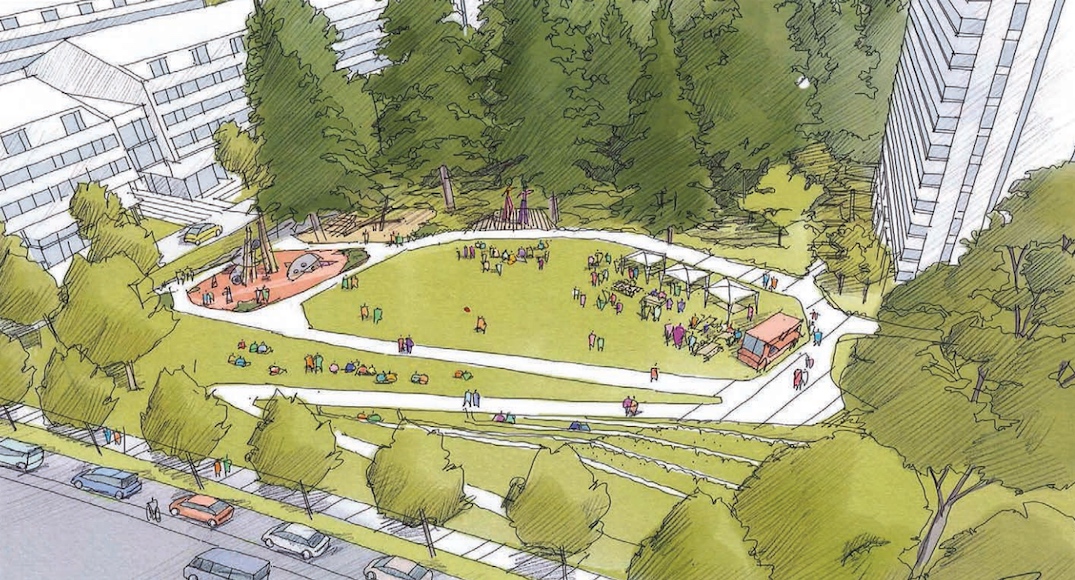 If approved, this would be Port Moody’s second largest single redevelopment project, after the nearby Flavelle sawmill redevelopment, which was approved by the municipal government in 2018.

The Flavelle waterfront project will create 3.6 million sq. ft. of floor area, including 3.26 million sq. ft. of residential space and the remainder as a mix of office, artist, creative light industrial, retail, and restaurant space. There will be enough space to house up to 7,000 residents and 1,000 jobs.