Coachella Music and Arts Festival is hands down one of the biggest and best music festivals on this continent. A large contingent of warm-weather seeking Canadian party animals make the pilgrimage out into the Californian desert every April. Here’s why you should too:

1. How’s the weather in Vancouver in April? Doesn’t matter, it’s not as good as the weather in Indio, CA. With an average high of 31°C, and 1mm of rain for the entire month of April, you can bet it’s t shirt weather 9 times out of 10. Get a head start on your tan this summer and make all of your pale friends at home jealous.

2. Coachella is basically a fashion show for hipster summer style. Headdresses, flowers, big hats, desert boots, and daisy dukes are all looks that became popular at Coachella. If you want a pretty good idea of what’s going to be hot this summer, or if you want to leave your mark on this summer’s fashion scene, you need to be there.

3. With its close proximity to Los Angeles, you’re bound to spot at least a few celebs enjoying the festivities.

4. That favourite song you’ve heard on the radio non stop for the last 9 weeks? You’ll hear it live at Coachella. The curators always do a great job of picking up the hottest buzz bands of the year and putting them on big stages. Bands that make the list undoubtedly blow up soon after, and often go on to headline the festival years later. If you are looking to discover your new favorite sound explore the day’s early sets and let your ears guide you. With 7 stages to navigate, the odds are in your favor that you’ll hear something you like. And of the 100s of bands performing, there’s no chance you’ve heard them all before. 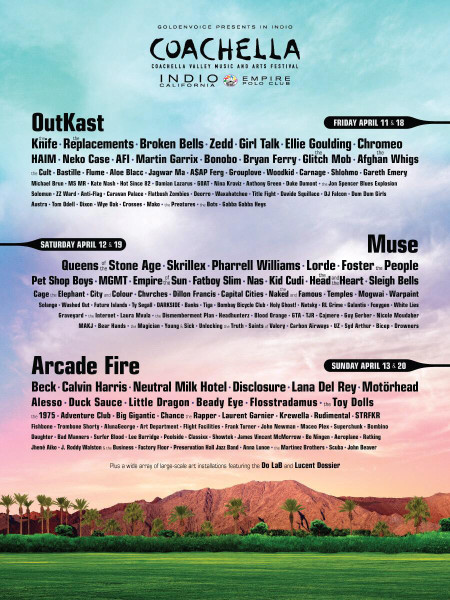 5. Surprise! Just because their name is not on the bill doesn’t mean they won’t perform. Coachella is notorious for having surprise guests perform that nobody would have expected. From John Fogerty with the Black Keys, to Rihanna with Calvin Harris, and of course the Tupac hologram, the possibilities to be entertained are endless.

6. Reunion performances are very common. Postal Service started their reunion tour at Coachella last year. Outkast will be performing together for the first time in 8 years on April 11. And there’s always older bands from the 90s and before to round out the festival line-up. Bands like the Blur, the Stone Roses and the Violent Femmes performed last year for the older audience. This year, the old timers will appreciate the inclusion of Neutral Milk Hotel, Nas, Superchunk and Bryan Ferry.

7. The pool parties are one of a kind. Companies like H&M, Microsoft, and Filter Magazine pull out all the stops to host hotel parties for the who’s who of Hollywood. If you can get on the list you might be partying with Usher and Katy Perry.

8. The art installations are out of this world. Ranging from fixed structures for resting, shade, or vantage points, to a giant, 30-foot-tall iridescent roving snail and a 125-ft tall praying mantis, the selfie opportunities are endless.

10. All music festivals offer the same sorts of stimulation for your senses: loud music, bright lights, beer gardens, great costumes, and funky art installations. But Coachella takes it to the next level. The music is better, the people are more beautiful, the food is tastier, the beer is colder, the grass is perfectly manicured. If you want to create some of the happiest memories of your summer, don’t hesitate-get on down to the desert to party with the lizards.