Corey Hirsch entered the Vancouver scene after the buzz of the 1994 playoff run was beginning to fade. Kirk McLean’s grip on the starters job was starting to slip, and the fiery red head, who had seen so much success with the Kamloops Blazers, was there to see if he could strengthen the nets.

Although Corey Hirsch’s time in Vancouver was short, he (and his mask) left a visible impression on the city, especially after the tough playoff series against the Colorado Avalanche in 1996 where he took on future Hall of Famer Patrick Roy. Even though Roy eventually bested him that series (Avs won in 6, then went on to win the Cup), it was a spirited battle and one of the last moments of sunshine before the darkness of Messier was to hit the lands.

I caught up with Corey and asked him 10 questions about his hockey career.

You played for the Kamloops Blazers during their glory years, at one point putting up 48 wins in the 89-90 season. What do you remember about that season? Len Barrie put up 185 points, future NHL legends Darryl Sydor and Scott Niedermayer were patrolling the blue line in front of you, you were in net…this was a team that won the WHL title rather handily…Was it hard to lose that season?

We did have an amazing team, we could score at will. A coach that would become a legend in the NHL in wins and a Stanley Cup (Ken Hitchcock), and a Hall of Famer on the blue line (Scott Niedermayer). When it came down to winning in the Memorial cup, our youth on the back end really hurt us. Myself, Sydor, and Steven Yule were 17-year-olds on the defensive side, and Scott was only 16. So we learned a lot from that experience and it definitely helped us win in 1992, but that’s a tough tournament with so much youth.

Despite that amazing season, your Blazers went 0 and 3 in the Memorial Cup, losing two games in OT. Was that a bit of a shock, considering what a great season your team had just had?

It was a complete shock, and it also caused me to not get drafted. I got passed over that year, as you could only go in the first 3 rounds as a 17 year old back then. Up until then I had an amazing season and was slated to go in the third round. However people forget a guy named Eric Lindros was on the Oshawa Generals. They had good players too! 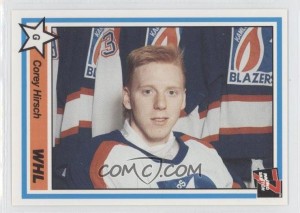 Image: Check Out My Card

Speaking of great teams, you got your first taste of NHL playoff hockey in the 1996 season, taking over for Kirk McLean for most of the series against the Avalanche.

I recently watched that series again, and those were two extremely talented teams. Alex Mogilny, Trevor Linden, Cliff Ronning, Esa Tikkanen, Russ Courtnall, Jyrki Lumme, Markus Naslund (Pavel Bure was on IR, but imagine him on that team in the playoffs) on your side, facing off against Sakic, Forsberg, Claude Lemieux, Ozolinsh, Kamensky, Foote, Patrick Roy, just to name a few.

It seemed like both teams were so skilled, especially when it came to passing the puck around. What do you remember most about it? Was it terrifying to face off against Patrick Roy?

The ability for both teams to score in that series was ridiculous. Kirk had been going through some tough times, and I was coming off a great season. Halfway through game 1, Pat [Quinn] threw me into the game and I finished the rest of the series.
To be able to have played a playoff series vs. Patrick Roy and to have won a playoff game vs. Roy, truly is an accomplishment I won’t ever forget. 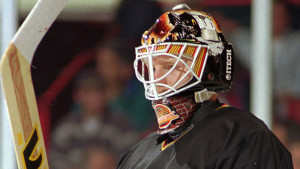 Watching that series, it was kind of like watching the end of a stand up era of goaltending. You would watch the Avalanche take shots, and you’d see yourself standing straight up and reaching down to cover the puck. Even Patrick Roy’s butterfly style wasn’t nearly as developed as the styles used today.

In today’s game, it’s almost mechanical in the approach goalies take. The majority of goalies utilize the same techniques. If a goalie doesn’t make a save, it’s almost as if people right away are breaking it down, showing where the goalie screwed up technique-wise. Even if a goalie makes a crazy desperation save, you have people tsk tsking them, critiquing them for putting themselves in that spot to have to make a wild save.

In the old days you would see diving poke checks, diving stacked pad saves, goalies coming out of the net flopping around, which was chaotic, but led to some heart stopping saves. Do you miss the variety of goaltending you used to see?

I miss the true athletic talent of goaltending. Goaltending now has become a mix of playing the percentages and using athleticism. Whereas old time goaltending was more athletic and using whatever you could to make a save.

The theory of work smarter, not harder, applies to goaltending today.  We made the game harder than it needed to be by being a stand up goalie. They play a smarter game today where goalies aren’t as exposed and make less mistakes. The advancement in the technology of equipment has allowed that.

Sometimes (in my playing days) you got scored on based out of fear and pain, and practice was survival, not an opportunity to get better.

What is the young back-up, older veteran goaltender dynamic like? Goalies who want to be the starter are always in the kind of uncomfortable position of knowing their back-up is gunning for their job. Was that ever difficult for you to handle, or was that just easy to accept as “part of the job”? Did it make it hard to become friends with another goalie, like maybe you didn’t go for beers together, because you knew you would be battling for ice time?

There is always that dynamic, because teams are always preparing for the next goalie and it takes so long to develop. Very rarely do you see a true friendship come out of it. Both goalies have to be very comfortable in their roles. It’s still super competitive because it’s not like a forward where both guys play. One plays and one doesn’t see the ice at all.

Do you remember what was going through your head in this picture? You look like you’re giving a pretty bad ass look to the camera. 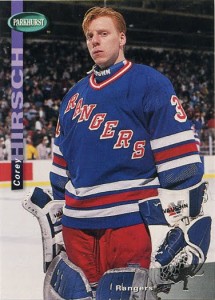 Yes I think it was during the days of the sitcom “Friends”, there was probably a girl right there and I’m probably saying  “How you doin?” in my best Joey Tribbiani impression. Because I’m cool like that (laughs).

OK, let’s get to “The Mask”. If you polled Canucks fans (older ones, at least) and asked them what the top goalie mask of all time in Vancouver Canucks history was, many would say your Alfred Hitchcock themed one was tops. How did that mask come to be? Did you specifically ask for a design like that, or did somebody suggest it to you and they ran with it? That mask is now in the NHL Hall of Fame, correct? Have you ever taken somebody to the Hall and pointed it out to them? (I would!)

At the time it was difficult to think of a painting with Canucks colours, orange, black, yellow, and red. A skate on the jersey….not much to go on. I had a really good painter named Frank Cipra and we came up with a Halloween type theme. From there it escalated to most goalies are crazy, which led to the Psycho mask theme. I just put the mask in [the Hall of Fame] a year ago, so no. Haven’t been there with anyone yet.

You’ve recently started up in sports broadcasting, appearing on various NHL outlets to talk hockey. How did that come to be? Are you enjoying your time behind the camera?

I Love doing television, it feels so natural to me to be doing it. It’s so much fun, and I just want to try to make people smile and laugh. People have all sorts of issues and stress, and they watch the game to get a break from it. The last thing they need is me breaking down the power play. So if I can tell a story and make people smile or laugh I’ve done my job. 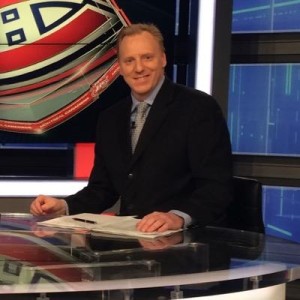 Today’s NHL landscape is far different than it was in the olden days. Social media has made for a far different play experience for everyone from the players, to the fans. Do you find it kind of neat that you’re able to reach out now and interact with people who watched you play in the NHL?

In the olden days, players would retire and they’d kind of disappear into the mist, but now players have a way to be visible to the people who loved watching them play. Do you ever get surprised when people will tweet at you about how they were a fan of yours?

I love how social media allows people to connect with me. I would say that 99% of people are awesome, positive and just want to enjoy the game. You get the odd strange person, but you can typically identify them right away. Something’s a little off and you just don’t engage in conversation.

The good thing about no social media when I played was you couldn’t get caught out late. Now guys can’t go anywhere without someone Tweeting or Facebooking about it. It’s pretty hard to hide.

Finally, Vancouver. The city that is known as “The Goalie Graveyard”. What was your favourite memory of your time playing here? And is it truly a “goalie graveyard’ compared to other cities?

Ha! No, Vancouver isn’t a goalie graveyard. It’s a stressful job, Vancouver relies on their goaltending maybe more than most. However when you do well, it’s very rewarding. My best memory is probably going into a restaurant after a playoff game in which we beat Colorado. The whole restaurant stood up and gave me a standing O’ when I walked in the door. Goosebumps to have 50 people standing in front of you clapping 2 feet away.
It’s Vancouver fans. Do well and they love you forever.

Bonus Question: Rate the Canucks skate jersey on a scale of 1 to 10. Don’t be afraid to go to 11.

The skate? I give it a 7. My favourite jersey is the simple stick. Curt Ridleys’ mask with the 2 sticks was one of my all time favorites. It’s one of the reasons I became a goalie.