Todd Bertuzzi, Markus Naslund, and Brendan Morrison will be together once again at Rogers Arena, as the Vancouver Canucks celebrate the “West Coast Express” before their game with the Buffalo Sabres on Monday.

The celebration is part of the Canucks’ recognition of the 20th anniversary of Rogers Arena.

Bertuzzi, Naslund, and Morrison made up one of the most exciting and dominant lines in the NHL for 3.5 seasons. They didn’t have a lot of playoff success, but that era of Canucks hockey was enjoyable to watch and brought the team back to the forefront after the dreaded Messier years.

So without further ado, apologies in advance about the video quality (the WCE predated HD TV), here’s a fun look back at the West Coast Express!

Let’s start off with something fun, shall we?

Here’s a song called Playoff Push by Ink Operated. It was made in 2003 before the playoffs at the height of the popularity of the West Coast Express.

To understand how brilliant this song is, you have to understand the circumstances in which it was made. This was made a couple of years before YouTube existed and before everyone and their dog had a Canucks song on the internet.

How underrated is Markus Naslund? He scored FOUR goals in one game and all anyone could talk about afterwards was this guy: 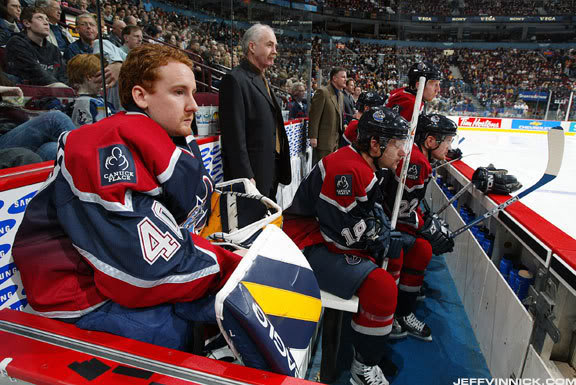 That’s Chris Levesque, the UBC goalie that nearly had to fill in after Johan Hedberg took a nasty hit to the head on December 9, 2003.

While the Levesque story was intriguing, Naslund’s night was downright amazing. Naslund missed the previous game with a groin injury and most of Vancouver was nervous that he would foolishly return from his injury too soon.

Naslund’s statline that night: 4 goals, 8 shots on goal, 21:26 of ice time. Todd Bertuzzi had 3 assists that night, and Brendan Morrison pitched in with 2 helpers of his own.

From 2002 to 2004, Todd Bertuzzi was the most dominant/feared power forward in the game. Here’s a small sample of his best hits.

Game 3 of the 1st round versus Detroit in 2002. I don’t think Chris Chelios ever had to endure another hit that hard in his 27-year pro career.

Game 7 against the Blues in 2003. Bertuzzi destroyed Bryce Salvador behind the net with a bone crushing hit.

This hit on Barrett Jackman came early the following season after the Canucks-Blues series in 2003. Jackman and Bertuzzi spent 7 games going at each other, so the big guy wasn’t about to lay off hitting his old nemesis.

With the Canucks facing elimination, down 3-2 in their series with the Calgary Flames, they got the start they hoped for. Just after the midway point of the game, the Canucks were up 4-0 and fans were beginning to make plans for Game 7 back in Vancouver.

Of course, the Canucks blew the 4-0 lead and proceeded to play an epic four-overtime game, the longest in franchise history at the time. That’s when Brendan Morrison scored the biggest goal of his career.

Morrison charged out of the corner, getting some help from Matt Cooke (ah the good old days of clutch and grab hockey) and beat Miikka Kiprusoff for the OT winner.

5. Game 7 against the Blues

The start of the 2003 playoffs was a tumultuous time for the Vancouver Canucks. Markus Naslund admitted that they choked down the stretch, allowing the Colorado Avalanche to come back and win the Northwest Division.

They started the series against a tough St. Louis Blues team with a 6-0 loss on home ice, and proceeded to lose two of the next three games to go down 3-1 in the series.

But that’s when the West Coast Express got on a roll.

The Canucks won the last three games, including Game 7 on home ice by a score of 4-1.

Morrison got the game winner:

And Naslund got the insurance marker:

This might be the most famous Canucks goal that came in a losing effort. Still, somehow it still holds up as a great memory.

With the season on the line and just seconds remaining, Markus Naslund took the puck wide, blowing by Flames defenceman Jordan Leopold and drove to the net. Matt Cooke cashed in on the rebound and the season was saved… For 15 minutes.

This is my favourite player-specific Canucks song of all-time. Heavy Eric hit the nail right on the head with this one. I could put this on my iPod right now and enjoy it.

Now, if you want more, check out the acoustic version of the same song while Heavy Eric does a log roll.

…That was, uh, something…

8. Toying with the Thrashers

The Atlanta Thrashers were not a good hockey team. This was no exception in a game against the Canucks on February 25, 2003 at Rogers Arena when they were on their way to finishing with the third worst record in the Eastern Conference.

Still, the offensive display by the West Coast Express was something to behold.

Brendan Morrison and Todd Bertuzzi had 4 points, Markus Naslund had 6 points, and the Canucks beat the Thrashers 8-0.

What’s more amazing? The score could have been even more lopsided. With the game in hand, head coach Marc Crawford limited the ice time for his top line. Morrison played just over 16 minutes, Bertuzzi under 15, and Naslund under 14 minutes of ice time.

It’s easy to forget just how much of a superstar Markus Naslund was in the early 2000s. His numbers suffered due to the ‘dead puck era’, but he was a star. He didn’t win the Hart Trophy in his career, but he did win a Pearson Trophy (MVP as voted by the players) in 2003.

This clip is from the 2005-06 season, which wasn’t a banner season for the WCE. They didn’t score on this shift, but it’s the best example I could find of their dominance on the internet. Holding the puck for prolonged periods, no-look passes, it was a thing of beauty.