Major changes are coming to British Columbia’s largest shopping centre. Sears Canada has plans to carry out an extensive $1 billion redevelopment project on an 8.9-acre parcel of land it owns at Burnaby’s Metropolis at Metrotown. The proposal will significantly expand the retail and commercial options available at Metrotown and could also bring as many as seven new skyscrapers to the area.

The shopping centre at Metropolis at Metrotown is largely owned by one of Canada’s largest commercial property operators and developers, Ivanhoe Cambridge. However, a large section of the property on the northeast corner fronting Kingsway and Nelson Avenue is owned by Sears Canada. The very same Sears that exists at the site today was the product of a 1985 expansion of the Sears store into a large shopping centre, known as Eaton Centre before later amalgamating with the adjacent Metrotown to become the Metropolis at Metrotown supermall we know today.

Sears has sweeping plans for the land it still owns which currently contains the aging Sears department store, the Toys ‘R’ Us at the mall’s basement level, ground level and underground parking facilities, and some loading and outdoor public spaces. According to the rezoning application submitted by the company, very high density (tall) residential and office towers will be built above a commercial-retail podium.

With the new development’s retail component, it will include a new flagship Sears store reportedly 100,000 square feet in size – down from the current store’s size of 140,000 square feet. The development is also expected to have urban street frontage along Kingsway and outdoor public spaces including plazas. It is currently not known if or how the commercial-retail components will be integrated seamlessly with the indoor facilities of Metropolis at Metrotown.

This project comes at a time when Sears is facing with a shrinking share in the highly competitive Canadian retail market. Like how the Hudson’s Bay Company sold its 220 Zellers locations to Target as part of its strategic revamp and renewal, Sears Canada has been using its real estate properties as a means of creating new investment revenue for the company. This includes the sale of its valuable lease in downtown Vancouver, which allowed Nordstorm to move into the city with its Canadian flagship.

There is certainly no reason to think why the Sears application will not be improved given the suitability of the site and the City of Burnaby’s strategy for the area. Once green lit, it will likely pave way for Ivanhoe Cambridge to also propose another major redevelopment of the parking lot site it owns between Chapters and Superstore on Kingsway (between Station Square and the Sears site, as pictured above). Other areas of the Metrotown mall site are also ripe and ideal for expansion and redevelopment.

Map by the City of Burnaby: The Sears redevelopment site at the northeast corner of Metropolis at Metrotown (on the corner of Kingsway and Nelson Avenue). 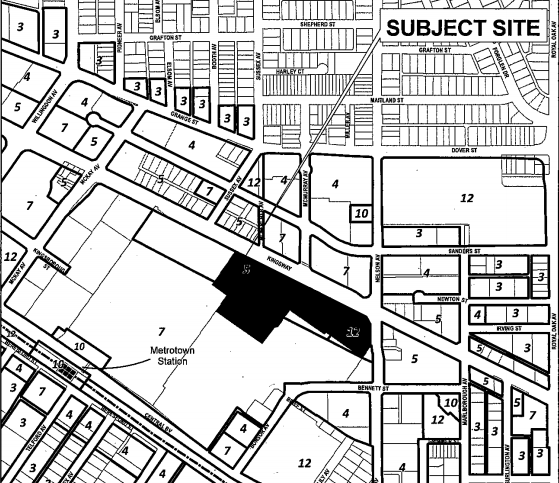