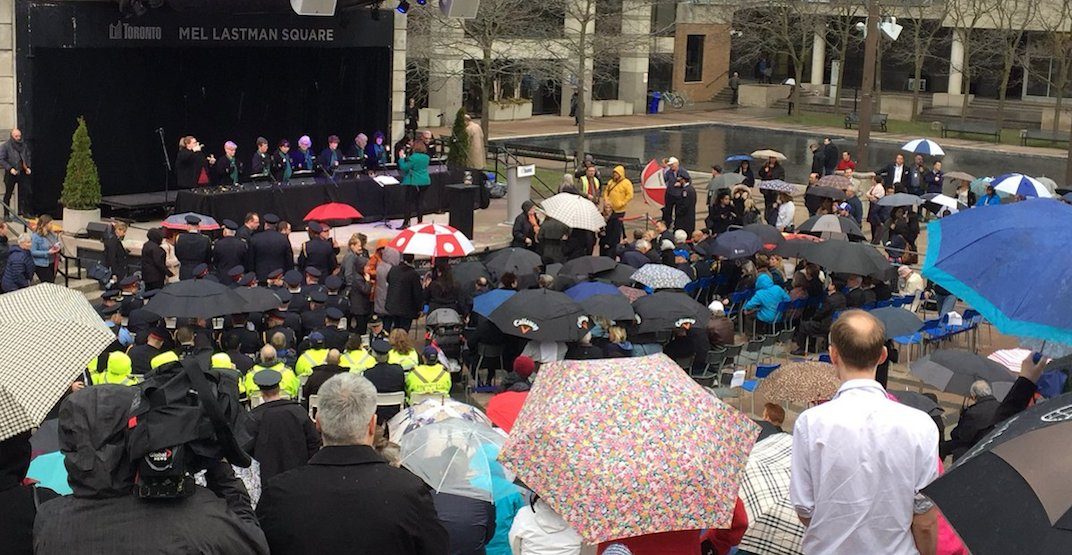 Friends and family members of those killed in the deadly Yonge Street van attack gathered for an emotional ceremony to mark the one-year anniversary of the tragic incident today.

The unprecedented attack claimed the lives of 10 people and injured 16 others after the driver of a rental van mounted the sidewalk of Canada’s longest road and ruthlessly plowed down more than two dozen innocent pedestrians.

The ceremony, which took place at Mel Lastman Square, was one of several events planned for today, to coincide with the time of the attack.

The city has installed temporary signs in the area to commemorate what it has dubbed the “Yonge Street Tragedy” until permanent memorials are created.

Consultations on the memorials are set to begin this spring.

“I know the pain of that day is sharpest to those who were closest to it and that pain is especially felt by the families of the 10 innocent people lost in this tragedy and the 16 innocent people who were injured, some left with injuries that will last for the rest of their lives,” said Mayor John Tory, during today’s ceremony.

Tory also acknowledged the first responders who answered the call that day, adding that they were absolute heroes during the attack.

He also added the city will be holding an event later this spring to recognize the first responders who were on Yonge Street during the attack, along with those who responded to the Danforth shooting attack months later.

“We will continue to gather each year to honour the victims of the Yonge Street Tragedy and to remind us of the strength and the heart of a city we must always keep as the envy of the world,” said Tory.

As the community continues to heal, the city came together today to comfort those who lost family and friends, by sharing messages of love and support.

today marks one year since the Toronto van attack. all the messages of hope and love in Mel Lastman square make me smile. they remind me that instead of fracturing, we stood united against hate and senseless violence. one year later, I’m more proud than ever to call Toronto home.

A year ago, we saw our city united against evil and dedicated to healing and love. Thank you to those who have already left messages of love and support in Mel Lastman Square this morning. #TorontoStrong pic.twitter.com/GFjd5AellU

Beautiful to see so many people at Mel Lastman square today paying their respects despite the rain #TorontoStrong #OneToronto We ❤️ Willowdale pic.twitter.com/rvCDvFXwGz