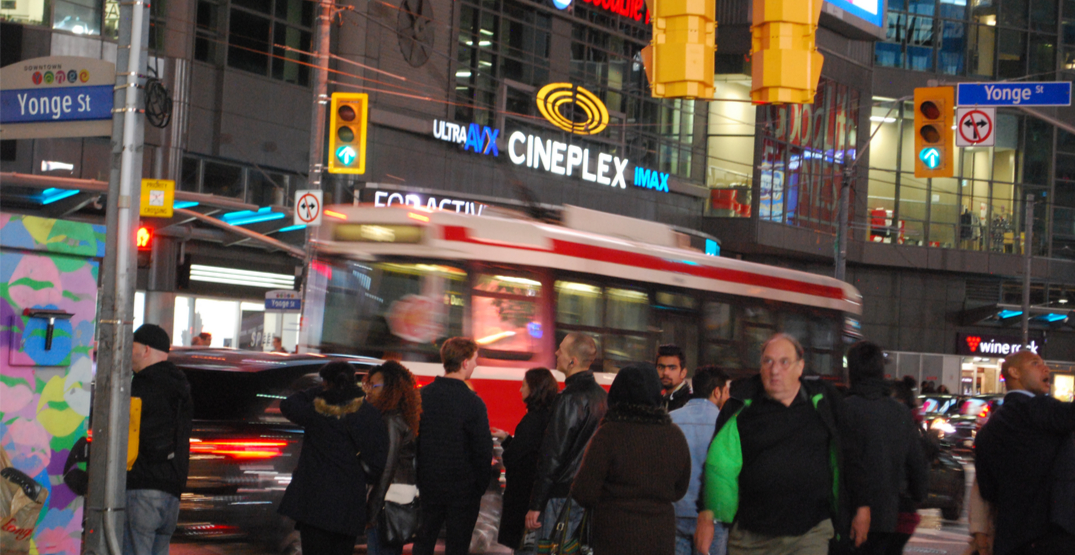 The City of Toronto is studying the future of lower Yonge to make more space for walkers and enhance movement on our most famous thoroughfare.

Changes are being proposed because the street is already overcrowded and, by 2041, the number of people in the downtown is expected to be twice what it is today.

Despite the study’s stated goals, it’s about more than congestion. It offers an opportunity to raise the very question of what inner-city streets are for.

Do they exist primarily to facilitate motorized movement? Or is their main function the safe passage of people engaged in active transportation?

Given our environmental crisis, I’d argue the latter.

The challenge is ensuring Yonge continues to support a flourishing neighbourhood and business district while addressing the council-declared climate emergency.

The solution: give priority to folks who walk, use a wheelchair, or ride a bicycle. Far-fetched? Not really.

The city’s own data show that the section of Yonge under study (College to Queen) “has the highest pedestrian volumes in Canada with numbers exceeding 100,000 per day” and that, in recent years, the percentage of people cycling and walking in the core went up while the percentage driving went down.

There’s just a few more days to provide your input on the future of downtown Yonge St between Queen St and College St. Fill out the questionnaire by Dec 6 at https://t.co/C8GTXCzjs4 #YongeTOmorrow @CityPlanTO @cityoftoronto @GreggLintern pic.twitter.com/NwtwqIR6qi

Given the intentions of the Downtown Plan — and the urgency of reducing heat on an overheated planet — “pedestrian priority” is clearly the best choice.

The city’s data show that up to 75% of people on this portion of Yonge are pedestrians and only 17% in the core are motorists. Since the percentage of people using a car here is small and on a downward trajectory, prioritizing driving would be unwise.

A remodeled Yonge should also be a safe place for cycling.

Interestingly, none of the proposed street designs includes dedicated Yonge bike lanes. Instead, the city recommends the construction of these lanes on another roadway, the likely candidate being University Avenue.

A study published this year by the Centre for Active Transportation looked at the economic impact of putting pilot bike lanes on Bloor. Its conclusion: “Monthly customer spending and number of customers served by merchants both increased on Bloor Street during the pilot.” In other words, a safe cycling environment and a flourishing commercial strip can go hand in hand.

In recent years, I’ve had the pleasure of working on urban issues with students from the University of Toronto’s Rotman School of Management. These MBA candidates taught me that thriving cities of the future will not be organized around the car. Rather, they will embrace public transit, walking and cycling. This is the transportation that will make streets vibrant, attractive, and full of economic activity. Neighbourhoods that don’t prioritize these modes will be left behind.

If active transport is the way of the future — if it makes good business sense and is imperative during a climate emergency — giving priority to Yonge’s pedestrians, wheelchair users and bike-riders is the way to go.

Why would we do anything else?

Have your say on the future of downtown Yonge by visiting the city’s brief “Yonge Tomorrow” survey. Survey closes Dec. 6.