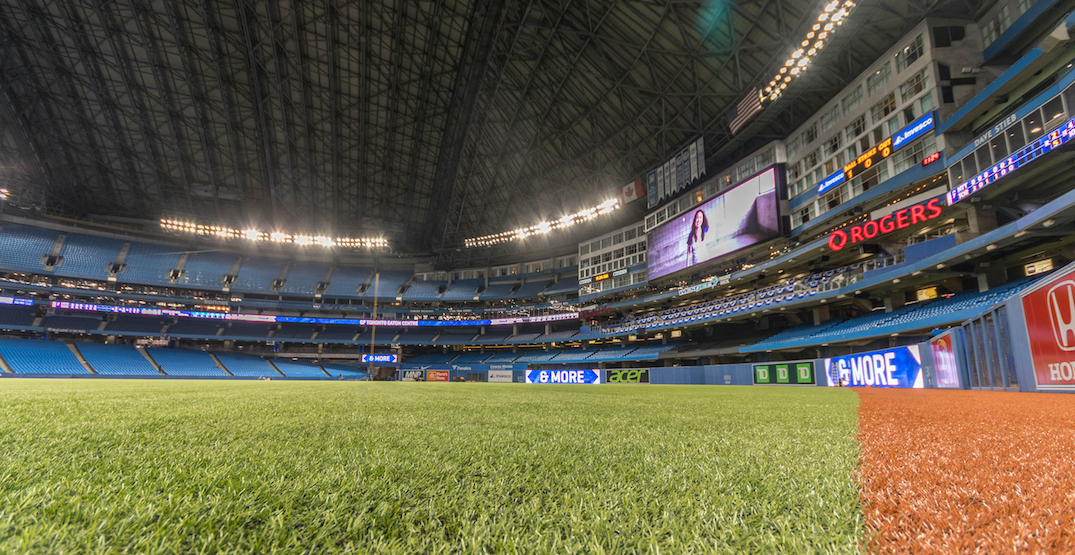 After years of waiting, Toronto Blue Jays fans may finally get what they’ve been asking for; a brand new ballpark. The Globe and Mail’s Andrew Willis reported last week that Rogers and the Blue Jays are hoping to bulldoze the Rogers Centre and build a brand new stadium for the team.

This may not be on the horizon for the next five to eight years, but it’s welcome news for a city home to the seventh-oldest ballpark in Major League Baseball. Rogers Centre (formerly SkyDome) opened in 1989 at the tail-end of the multi-use stadium era when the goal was to pack as many fans into a stadium as possible to drive gate revenue.

Over the years, the Blue Jays tried their best to bring the stadium up to today’s modern standards, but there’s only so much retrofitting you can do to an old ballpark before you have to bulldoze it and start fresh.

That’s the exact dilemma the Blue Jays are facing right now; do they spend hundreds of millions of dollars to retrofit a 30-year-old stadium, or do they gut it and build a state-of-the-art ballpark from scratch?

If they’re going to construct a brand-new ballpark, these are some items that should be at the top of every fans’ wish lists.

This wish list item has very little to do with the overall fan experience, but installing a real grass field as opposed to artificial turf gives a stadium a true baseball “field.” It looks great on-camera, the players prefer playing on it, and brings that sense of realism to the downtown core.

The Blue Jays have toyed with the idea of installing a grass field at the Rogers Centre in the past, but it’s a logistical nightmare. If the Blue Jays are starting from scratch with a new ballpark, a grass field should be at the top of the priority list.

The land surrounding 1 Blue Jays Way has transformed by leaps and bounds over the years, but it’s still an ideal location to house a professional sports team. The location can’t be beat, and the view of the nearby CN Tower and the adjacent waterfront seems like an opportunity missed.

If the Blue Jays could somehow reconfigure a stadium on the same land to face towards the water, they’d have their own version of PNC Park in Pittsburgh or Great American Ballpark in Cincinnati. A ballpark with the water as a backdrop would make for one hell of a view.

Opening open the ballpark as much as possible would benefit the Blue Jays; whether that’s creating open air spaces or installing some glass walls or windows to provide a view of the adjacent waterfront. Whatever they can do to open up the stadium to the city would be a vast improvement upon the current domed-in atmosphere.

3. Commemorative statues/displays around the stadium

Over their 42-year history, the Blue Jays witnessed some of the greatest players of their generation play in Toronto. Dave Stieb, Tony Fernandez, Roberto Alomar, Carlos Delgado, Roy Halladay, and Jose Bautista just to name a few.

These players should be immortalized in some fashion as a tribute in or around a new stadium. Honour these players by erecting statues of their iconic poses surrounding the new ballpark: Jose Bautista’s bat flip, Roberto Alomar’s two fingers in the air, Joe Carter leaping in the air, or a Roy Halladay fist pump.

As of now, there’s nothing outside the stadium as a tribute to these Blue Jays legends. That unfortunate oversight should be corrected by the time the team unveils their next home in Toronto.

This goes part and parcel with improving the overall food and drink selection at Rogers Centre, but one way to overhaul the drink component is to bring in more craft beer into the stadium. Most of the current “craft” offerings are owned by brewing conglomerates. Considering that Toronto is home to dozens of craft brewers, it only makes sense to bring the city’s best brews into the ballpark.

If you’re going to pay an arm and a leg for a beer at a Blue Jays game, it may as well be from a brewery near the dome (or at least from the GTA). There are no shortage of stellar brews from Toronto, and they should be showcased inside the stadium for thousands of thirsty fans.

5. Seats that face the action

If you’ve ever sat down the first or third base line at Rogers Centre, you’ve probably noticed the wonderful straight-on view you might have of centre field or the outfield wall. Fans have to crank their necks the whole game just to watch the action at home plate.

That’s partially a side effect of configuring the seats for a multi-purpose stadium, but one slight improvement at the Blue Jays’ next stadium should be seats that are angled towards the action. It’s a simple ask, but trust me, it makes all the difference in the world.

Only two players in the 30-year history of the Rogers Centre have scaled the outfield fence to steal a home run: Rajai Davis and Kevin Pillar. Yet at other stadiums, larceny happens on the regular.

Lowering the outfield walls from 10 feet to seven feet would not only increase offensive output, but it would give outfielders more chances to bring back would-be home runs and make highlight reel catches. There’s nothing really exciting about a ball bouncing a foot from the top of the fence, but there is something thrilling about watching an outfielder leap back and save a ball from leaving the yard.

This might sound pedestrian, but cup holders are one of those things you don’t notice until they’re not available. Currently, cup holders are only available on certain rows of seats at Rogers Centre (usually premium seating), so if you aren’t a big baller, you’re forced to hold on to your beverage the whole time like a neanderthal.

A cup holder on the back of every single seat should be at least a footnote on the mandate for the Blue Jays’ new ballpark. If we can’t watch baseball without resting our beer in a holder, what kind of society are we, really?