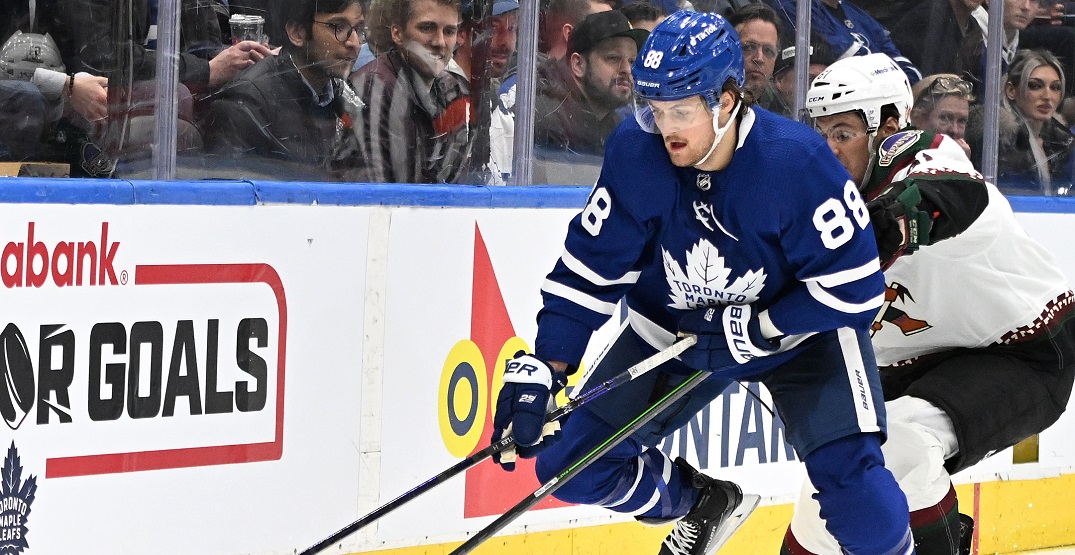 It’s often said there are three certainties in Toronto: TTC delays, construction, and speculation about a William Nylander trade.

After Saturday’s loss in Montreal, Toronto Maple Leafs’ head coach Sheldon Keefe told reporters that Nylander’s play of late has been “not even close” to his potential before bumping him to the third line ahead of Sunday’s 5-2 win over Florida.

Nylander remains on the third line alongside David Kampf and Pierre Engvall for tonight’s matchup with Boston after playing a season-low 14:10 against the Panthers last game.

But despite the public pressure and shortened ice time, Keefe didn’t appear interested in getting into the details of Nylander’s rough patch.

“I am not going to pile on Will here,” Keefe added after Saturday’s game. “He knows what makes him great. He knows what he needs to get back to.”

Keefe’s points about Nylander said more if you read between the lines — it’s hard to imagine them as a criticism of his offensive game, as he’s put up nine points in the past 10 games and actually scored a goal on Saturday.

While Keefe wouldn’t nitpick, there’s likely some frustration with an aspect of Nylander’s usually-strong defensive abilities. TSN’s Travis Yost pointed out that Nylander’s on a -11 on-ice goal differential since January 1.

Add in the line demotion, along with a well-circulated clip of hockey insider Chris Johnston on TSN Radio yesterday stating that he sees one of the Leafs’ top four highest-paid forwards going in a trade this summer, and Nylander’s name shot right back into the trade mix once again — and things look precarious.

“I don’t know who it’s gonna be,” Johnston said, adding that the NHL’s slow-rising salary cap induced by the costs associated with the pandemic could be a driving factor. “I just see that coming for sure.”

An Auston Matthews trade wouldn’t make any sense as he’s on pace to lead the NHL in goals for a second consecutive year, while captain John Tavares holds a no-trade clause and would likely be in no rush to move either. That leaves Nylander and Mitch Marner, who is seventh in the NHL at 1.32 points per game (27 G, 47 A, 74 PTS).

But with Nylander (24 G, 35 A, 59 PTS) on pace to break his career-high 61 points in the coming weeks, here’s why trading the 25-year-old winger would be the wrong call for Toronto:

Back in 2018, Nylander took part in a very public, very long contract standoff that crept into the first two months of the NHL season.

From angered fans, Nylander took in every adjective in the book before signing a new deal: greedy, selfish, overrated. You name it, he heard it.

For the first time since the Leafs took him at eighth overall in the 2014 draft, trading the winger seemed like a real possibility in Toronto.

Before he rejoined the Leafs, Sportsnet’s Elliotte Friedman said in late November 2018 that he expected Nylander to be gone that upcoming summer, even with a contract extension.

Of course, that never happened. Now in year four of his six-year contract, Nylander has played 238 games since signing the deal, compared to 185 with the team prior to it.

It’s been over three years of trade rumours, with, of course, no trade coming to fruition.

It might sound incredibly simple, but: if the Leafs want to keep Nylander, they can. Salary cap crunch or not, his contract is signed through 2024, as is Matthews, with Tavares and Marner extending through 2025.

It’s a top-heavy roster, sure, but it’s also been extremely effective as what it’s been designed to do. Over the last three seasons, just two NHL teams (Colorado and Florida) have scored more goals than the Leafs. The Leafs can keep their stars if they want to and filler to the necessary roster adjustments.

Like it or not, the ups-and-downs about this 82-game Leafs season really don’t actually matter all that much. Records, career highs, even a second straight Rocket Richard Trophy for Matthews? Throw it all out the window come May.

The Leafs face immense amounts of pressure to win their first playoff series in 18 years and currently sit in a dead heat right now in a tight Atlantic Division.

Whether they finish first place or lower, none of it will matter until they’re judged come postseason time.

Nylander led the team in scoring with five goals and three assists for a total of eight playoff points in seven games. It was an inexplicable loss where Toronto’s usual offence dried up against a strong Carey Price, but that wasn’t the case on Nylander’s part.

Nylander’s playoff performance last year doesn’t hold any bearing on how he’ll do this year, just as his five goals and 15 points in 25 previous postseason contests didn’t affect his hot stretch against the Canadiens.

Sure, the Leafs could crash and burn and embarrass themselves come playoff time. Nylander could have a great playoff run or a terrible one.

But should a mid-season line demotion and a so-called slump where he’s still producing offensively be the catalyst of a trade? Get real.