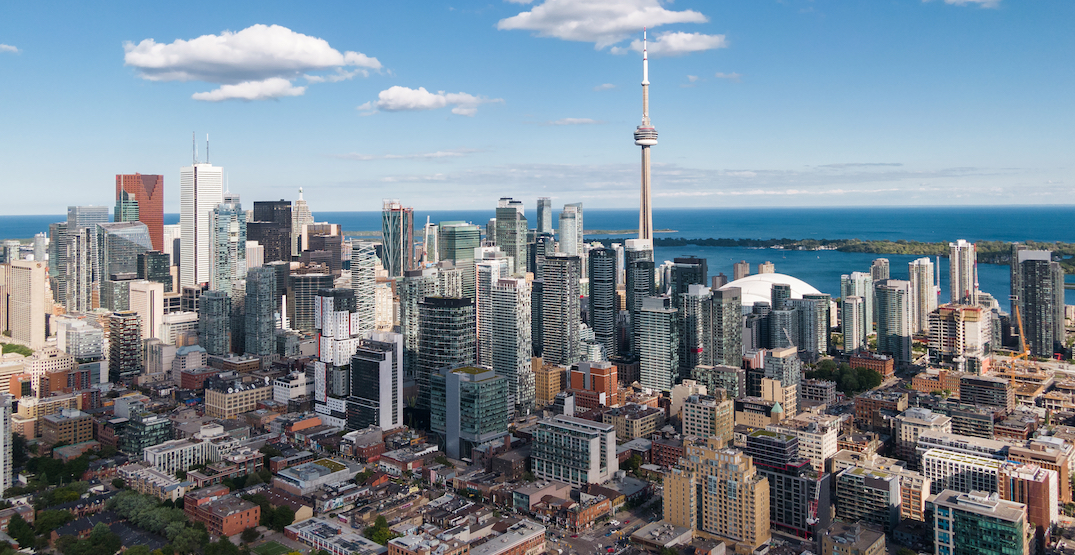 Written by Romana King, an award-winning expert in personal finance and real estate, and the Director of Content at Zolo.

Recent reports suggest that Toronto rental prices declined significantly over the past year as the global pandemic hurt our overall health and the economy across the globe, which has made finding a more affordable rental easier.

Although analysts aren’t predicting any significant change to rental rates, at least for the foreseeable future, there is an expectation that rental prices will start to pick up near year-end as more people are vaccinated and COVID-19 rates begin to fall.

For current renters, this makes 2021 the ideal time to shop the market and secure a good lease deal.

“For over two decades the Toronto rental market has been favouring landlords, but a year into the pandemic and there’s been a big shift with conditions now favouring tenants,” explains Zolo President Mustafa Abbasi.

This shift in favour of renters is due, in part, to a lack of movement in the entire housing market because of higher unemployment during pandemic lockdowns; fear also prompted people to stay put for longer.

Demand also dwindled as students stopped looking for rental accommodation near post-secondary schools and new immigrants being admitted into the country. There’s also been a temporary hold on the demand from the “household starts” segment of the market — households formed because of marriage, childbirth and recent graduation from post-secondary.

“All of this gives tenants a lot more negotiating power,” Abbasi said.

For tenants no longer factoring in commute times, the Toronto market is now offering larger rental accommodation at more affordable price points. Those looking to rent in historical hotspots, such as downtown Toronto, can also find great deals.

“Condos in the city’s downtown core are being leased to new tenants for below the listed rental rate — a situation rarely seen in previous years,” Abbasi said.

To help you determine where in Toronto you’ll have the best chance of finding a rental unit equal to or below average market rent, we analyzed the rental data from the 35 zones outlined by the Toronto Regional Real Estate Board (TRREB).

According to TRREB, the average monthly rental rate for a 1-bedroom apartment in the city of Toronto is $1,845 and$2,453 per month for a two-bedroom. Using these averages as a benchmark, we compared Q4 2020 average rents for each community and found that 57% of these communities now offered rental suites at or below the averages.

Below are the top Toronto neighbourhoods to find more affordable one- and two-bedroom rental apartments. 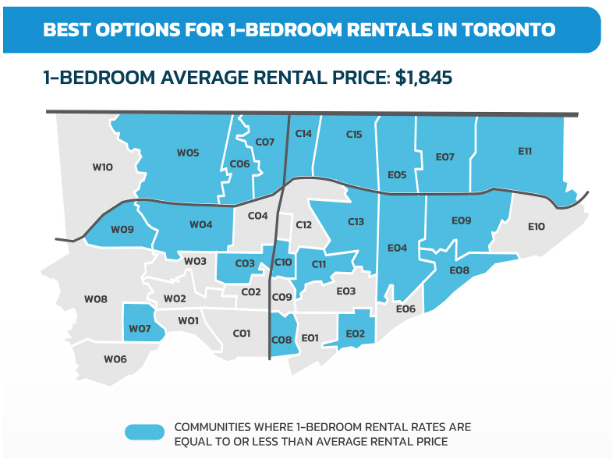 The “prime downtown markets” are historically the most expensive areas to rent. This includes all property types in The Annex, the Waterfront communities, as well as Yorkville.

During the pandemic, these communities experienced some of the biggest monthly rental price drops. According to an analysis by Torontorentals.com, average monthly rent rates from Q1 to Q2 2020 dropped by:

But despite these significant drops in average rental rates in the city’s downtown core, it’s still hard to find an affordable rental property in these Toronto neighbourhoods.

The average one-bedroom rent in these neighbourhoods is $1,850 — just a smidge above the city average of $1,845.

Unfortunately, space is still a premium in the downtown area. Still, if you’re interested in a 2-bedroom apartment in the downtown core, consider comparison shopping in the communities closest to the waterfront. This includes the Waterfront Communities, Moss Park, Church-Yonge Corridor, North St. James Town, Cabbagetown-South St. James Town and Regent Park, where the average rental price for a 2-bedroom apartment is $2,588.

Another option is to check out what is available in the neighbourhoods of Niagara, Waterfront, Kensington-Chinatown, Trinity-Bellwoods, Palmerston-Little Italy, University and the Bay Street Corridor, where the average rental price for a 2-bedroom apartment is $2,659. 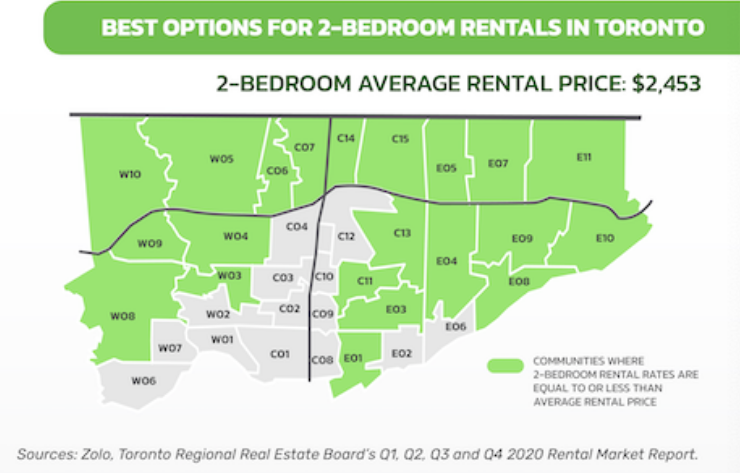 If you’re willing to relocate north of Bloor Street, then the options start to open up for rental units that are close to the main Yonge-University subway line but still at a more affordable price point.

For instance, the average monthly rental rate in the Oakwood-Vaughan, Humewood-Cedarvale and Forest Hill South areas is $1,810.

Although not directly on the Yonge-University subway line, another option is the Banbury-Don Mills, Parkwoods-Donalda and Victoria Village area where 1-bedroom apartments, on average, go for $1,780.

For instance, the average monthly rental rate in the areas of Thorncliffe Park, Flemingdon Park and Leaside is $2,303. This community zone is popular with families. A little further north, you’ll find average monthly rentals for $2,484 in Banbury-Don Mills, Parkwoods-Donalda and Victoria Village.

“Midtown neighbourhoods tend to offer the best of both worlds,” said Kevin Ali, Broker of Record for Zolo. “You get the advantages of dedicated residential space, such as quiet neighbourhoods and plenty of green space, while enjoying the amenities big-city living offers, such as trendy shops and restaurants.”

Add to this the excellent schooling options and the opportunity to find a larger rental space for less and midtown communities are becoming a popular place for tenants to shop for a new home.

Moving further up the Yonge-University subway line, there are four communities with average one-bedroom rental rates equal to or less than $1,843 per month.

The average rent for 1-bedroom suites in Bathurst Manor and Clanton Park is $1,691 — putting almost $1,850 back in your pocket over the next year.

For two-bedrooms, the most affordable community is the commuter enclave of Clanton Park and Bathurst Manor, where the average monthly rent is $2,272.

Moving a little more central (and closer to subway access) and you can find two-bedrooms for an average of $2,585 per month in Westminster-Branson, Newtonbrook West, Willowdale West and Lansing-Westgate.

On the other side of Yonge Street, you can find average rents of $2,550 in Willowdale East and Newtonbrook East.

Some of the most affordable rental suites can be found in the east end of Toronto.

In Toronto’s east end, those looking to stay close to the GO-Train line (or Lake Ontario) should look in Woodbine Corridor, East End Danforth and The Beaches where the average one-bedroom goes for $1,818. In Cliffcrest, Scarborough Village and Guildwood they go for even less, with an average price of $1,723.

Staying in the east end, but moving a bit further north, check out Wexford-Maryvale, Dorset Park, Ionview, Kennedy Park and Clairlea-Birchmount which has an average price of $1,769.

A one-bedroom in Bendale, Woburn, Morningside goes for an average $1,724; Tam O’Shanter Sullivan, L’Amoreaux and Steeles for $1,808; Agincourt South Malvern Way, Agincourt North and Milliken for $1,703; and Malvern and Rouge for $1,800.

Renters looking for a two-bedroom should consider comparison shopping in North Riverdale, South Riverdale, Greenwood-Coxwell, and Blake Jones where average rent is $2,378.

Other more affordable two-bedroom options include:

If you’re looking for an affordable one-bedroom rental in the west end of Toronto, look in the following neighbourhoods:

Options are a bit more limited for affordable two-bedroom rentals in this area but still, there are good options in the following neighbourhoods: