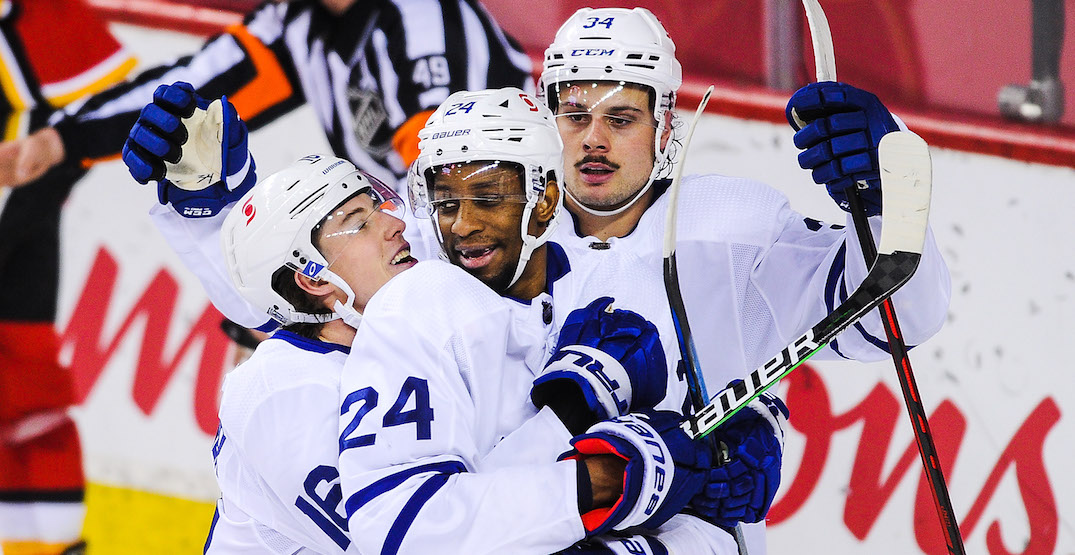 If you’ve spent any time on a message board, salary cap website or even just plain old hockey Twitter over the last decade, there is a handful of players that always seem to make their way over to the Toronto Maple Leafs, at least hypothetically.

Following in the footsteps of Patrick Marleau, John Tavares, and coming in the same offseason as future Hall of Famer Joe Thornton, Scarborough native Wayne Simmonds has, in his 13th season, finally satisfied the dreams of internet commenters and angsty hockey parents alike.

To be clear, Simmonds isn’t the player he used to be — he hasn’t hit the 20-goal mark in either of the last two seasons, and hasn’t hit 50 points since 2016-17. But when you factor in the short-term contract he’s on, the role he’s carved out for himself, and the fact he’s found himself on a contender once again, it’d be tough to find a better fit for both Simmonds and the Leafs’ fourth line.

After spending the first three years of his career with the LA Kings, Simmonds was a key part in a blockbuster trade that sent Mike Richards to California, and eventually to a pair of Stanley Cups. While with the Flyers, Simmonds became the poster boy for the modern power forward, topping either 28 goals (yes, an arbitrary number) or 100 penalties minutes four times each. Admittedly a bit of a wonky stat, Simmonds also has topped 120 hits in each full NHL season he’s played.

Though the Flyers could not make it past the second round of the playoffs in Simmonds’ tenure, he put up a respectable 15 points in his 30 playoff games in Philadelphia.

Standard ageing curves have come into play with Simmonds, with declining point totals in each of his last four seasons. It’s no secret he’s had some struggles finding a good fit as of late, bouncing around with Nashville, New Jersey, and Buffalo in the two seasons prior to this one. But as we’ll get into with the next point, much of Simmonds’ decline has come with high expectations, and a steep price tag as well. In Toronto, there’s much less of that pressure.

The curse of money

Simmonds was on the highest salary of his career last year, a one-year, $5 million deal signed with the New Jersey Devils. With just eight goals and 16 assists in 61 games, it’s not hard to draw the conclusion the contract didn’t match the performance.

New Jersey was well out of the playoff race when Simmonds was shipped off to Buffalo at the trade deadline, and with the NHL shutting down due to the coronavirus pandemic in mid-March of 2020, he managed just eight games in Buffalo before becoming a free agent.

But in Toronto, he’s on a salary (another one year deal for $1.5 million) that both lowers his expectations and doesn’t require the need to be played up higher in the lineup than necessary.

Simmonds has been slotting in mostly on the Leafs’ fourth line with a rotating cast of characters, with the option to move up to the third line or play on the power play if needed.

At under 10 minutes a night, he’s never played less in his career. But with two goals in the last two games, Simmonds is now hitting his stride and being exactly the player the Leafs could’ve wanted.

The short-term contract is also a great fit for the Leafs as well. Though there’s still a vast majority of the season to go, it offers Kyle Dubas and the management team the opportunity to sign Simmonds to another short-term deal if things pan out for the remainder of the season.

And hey, if Simmonds’ last couple games don’t lead to more success? It’s at most 56 regular season games and a playoff run they’re locked in for — with no real incentive to re-up if they’re able to pivot to other options.

Lastly, is there anything more wholesome in the NHL than a player making it work with a team they grew up watching? For pretty much of the first half of Simmonds’ career, the Leafs were among the Leafs’ worst teams and made the playoffs just once from 2004-2016.

Even if the Leafs had somehow been able to acquire a prime Wayne Simmonds in most of those seasons, they were usually far enough out of the playoff race for him to have been that final puzzle piece the Leafs have been looking for.

And, yes, it’s been hardly a month of action, but Simmonds is already in a class of his own — he’s the forward with the highest career point total from Scarborough that played for the Leafs, as per QuantHockey.

There’s no telling what tomorrow will bring, but for now, everyone is involved is winning with Wayne Simmonds on the Leafs.