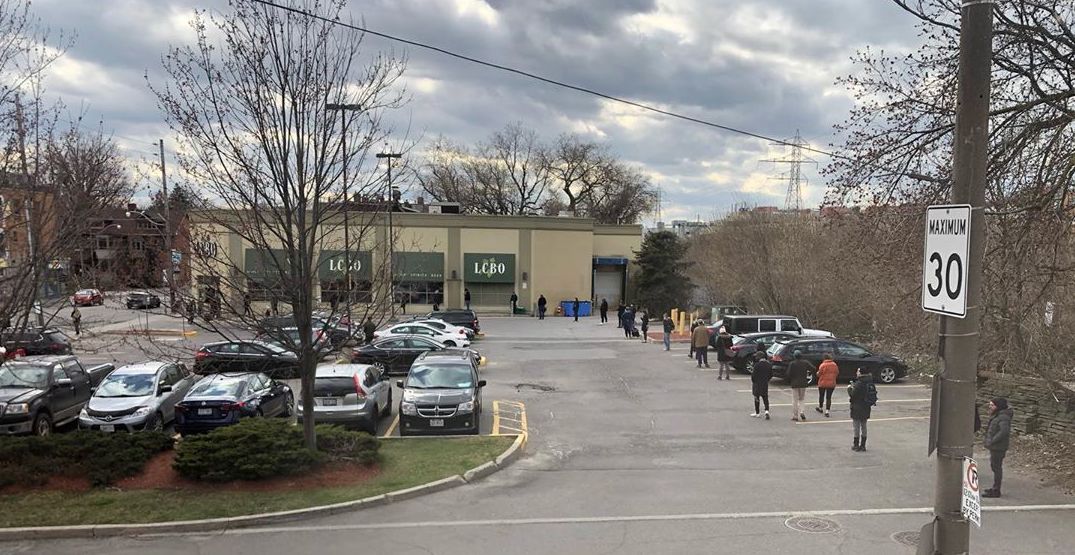 Although many delivery services have added alcohol delivery to their menu, a lot of Torontonians are still opting to leave their houses for a quick trip to LCBO.

And because of new physical distancing laws, many of the liquor store locations have faced longer than normal wait times, something that Instagram user w8time is all too familiar with.

Living across the street from the 232 Dupont Street LCBO, Guillermo Herrera-Valencia has been sharing live updates of the lineup to his Instagram page: w8time.

He tries his best to update by the hour on weekends or as soon as something significant happens, such as a shorter wait time. He’s also started to livestream the last 30 minutes of the day, at 5:30 pm.

His posts show the current lineups, holiday hours, as well as estimated wait times of his local LCBO.

Guillermo told Daily Hive that w8time was an idea suggested by his father-in-law, who’d noticed that the lines in his favourite supermarkets were getting incredibly long.

Working in technology, Guillermo quickly began putting together the project, figuring out how the algorithms would work by tracking everything manually by observation. He noted that his Instagram page is actually just a test phase of an upcoming project which they hope to launch soon.

He tells Daily Hive that he’s started tagging local wineries and breweries in his posts as a way of urging locals to stop waiting in line and start supporting local businesses.

“I want to spread the word of those businesses who are open and changing their business model by offering their products in a creative way,” he said.

Those who’d like to contribute to Guillermo’s project should share images of lineups that they’re in, and where they’re located. He’s hoping that he’ll be able to share the information so that Torontonians will be able to keep a better physical distance.