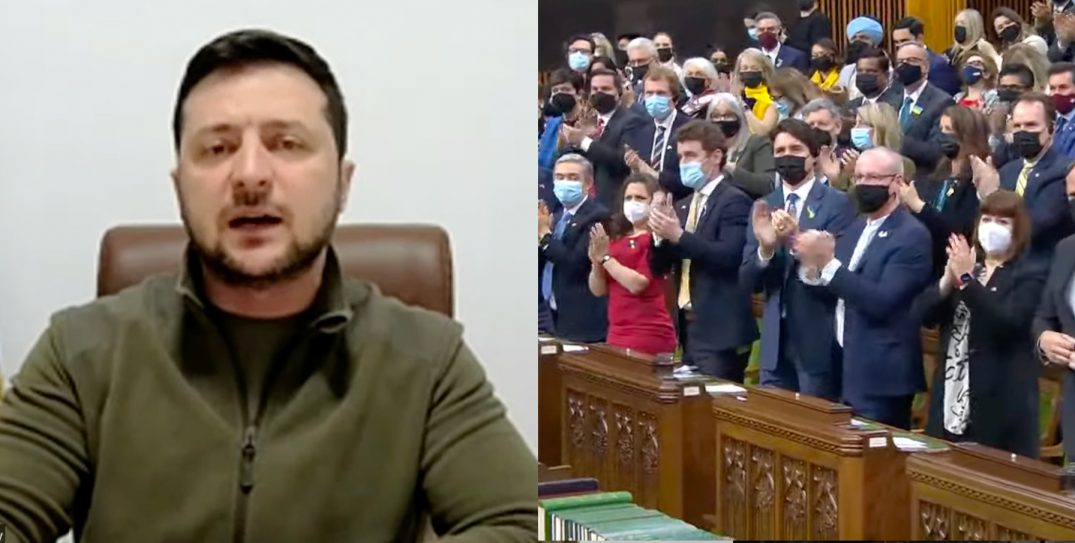 Zelenskyy was welcomed to begin the address by Prime Minister Justin Trudeau, who spoke about the importance of Ukrainian immigrants in the development of Canada.

“Before I begin, I’d like you to understand my feelings and the feelings of all Ukrainians. Our feelings over the last 20 days — 20 days of a full-scale aggression of the Russian Federation,” Zelenskyy began.

“Imagine, each of you, that at 4 am, you start hearing explosions,” Zelenskyy asked. “Justin, can you imagine you and your children hearing all these severe explosions — bombing of airports, bombing of Ottawa airport, tens of other cities of your wonderful country… Can you imagine that?”

The president paused, and the Canadian parliament quietened completely. He then went on to set an even more vivid and intense scene.

“Cruise missiles falling down, and your children are asking what happened. You’re receiving the first news about which infrastructure objects have been bombed and destroyed by Russian Federation. And you know how many people already died.”

“And on the second day, you receive a notification that huge quantities of military equipment are entering your country, crossing the border. They’re entering small cities, encircling cities, and they start to shell civil neighbourhoods. They bomb school buildings, they destroy kindergarten facilities, like in our cities,” Zelenskyy asked the crowd to picture.

“Imagine that someone is sieging Vancouver. Can you just imagine that for a second?” he said, bringing the conversation closer to home for people in BC. “This is exactly the situation that our city of Mariupol is suffering right now. They are left without heat or hydro, without means of communicating, almost without food, without water, seeking shelter in bomb shelters,” he added, moving to address everyone in the room to remind them he was talking to them.

“Dear Justin, dear guests, can you imagine that every day you receive memorandums about the number of casualties including among women and children? You’ve heard about the bombings; currently 97 children have died during this war.”

The Ukrainian president then spoke about Toronto: “Can you imagine the famous CN Tower in Toronto if it was hit by Russian bombs? Of course, I don’t wish this on anyone, but this is our reality in which we live, and we have to contemplate. We have to see where the next bombing will take place,” he clarified.

“Our Freedom Square, our Babin Yar, the place where the victims of the Holocaust were buried — it has been bombed by the Russians. Imagine that Canadian facilities have been bombed like our buildings and memorial places have been bombed. A number of families have died. Every night is a horrible night,” the chilling address continued.

“Russians are shelling from all kinds of artillery. They’re hitting civilian infrastructure; they’re hitting buildings. Can you imagine that there’s a fire starting at a nuclear power plant? That’s exactly what happened in our country. In each city they are marching through, they’re taking down Ukrainian flags. Can you imagine someone taking down your Canadian flags in Montreal and other Canadian cities?”

Zelenskyy said that he’s aware Canadians support Ukraine, but stressed the importance of putting oneself in the shoes of those in the war-torn country. “We’ve been friends with you, Justin, but also, I would like you to understand and I would like you to feel this — what we feel every day. We want to live and we want to be victorious,” he said. “We want to prevail for the sake of life.”

“Can you imagine calling your friendly nations and asking them, ‘Please close the skies, close the airspace, please stop the bombing!’ How many more cruise missiles have to fall on our cities until you make this happen? And they in return, they express their deep concerns about the situation. When we talk to our partners, they say, ‘Please hold on a little longer.'”

The president further stressed how much more needs to be done to disempower Russia and its assault on Ukraine.

At the end of Zelenskyy’s address, everyone in the Canadian Parliament gave him a standing ovation and broke into applause that lasted minutes. “Slava Ukraini!” (“glory to Ukraine!”) echoed in the chamber.