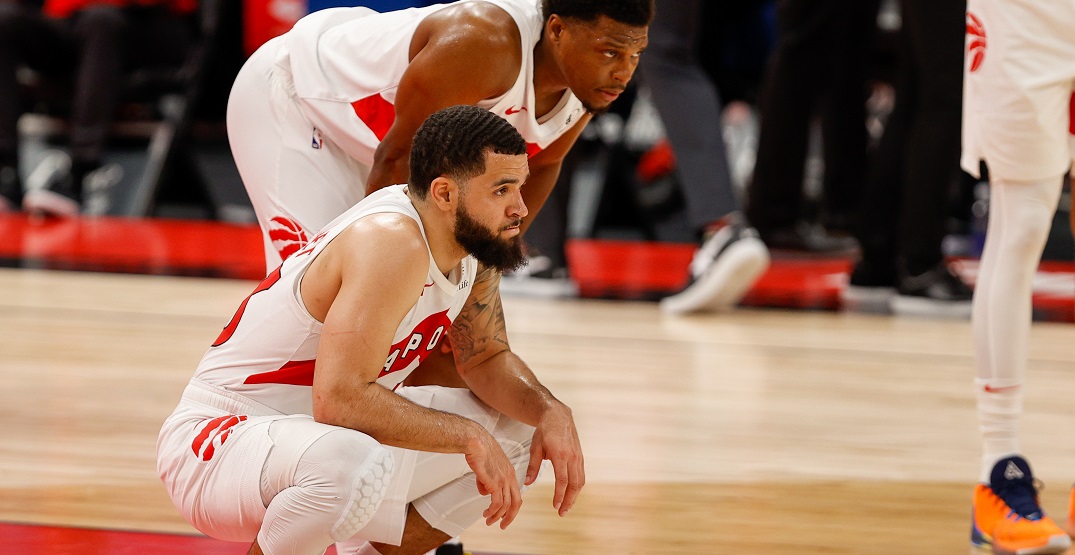 There’s no denying it: after nearly a decade of being one of the NBA’s most consistent teams, the most recent Toronto Raptors season was arguably the toughest to stomach in franchise history.

Veteran guard Fred VanVleet spoke candidly as he always does about the challenges the team faced while in Tampa Bay. The Raptors were the only one of the NBA’s 30 teams to play this season entirely away from their regular home arena, due to Canada’s two-week quarantine restrictions upon entry.

“Tampa was great,” VanVleet said in a season-ending press conference on Sunday. “I’m not trying to shit on Tampa, but it’s not Toronto. It’s not where we’re supposed to be.”

“We miss Canada more than words can say,” he added. “We miss our fans. We miss Scotiabank Arena. We miss living in Toronto. Hopefully we’ll be back soon… It will be like we never left.”

Finishing 12th in the Eastern Conference with a 27-45 record, there was a reason the Raptors looked like a shell of their former selves. The court and the uniform looked the same, but everything else felt like it was the perfect storm of awfulness.

More than anything, though, the Raptors just want to come home to Toronto.

Losses of veteran big men Marc Gasol and Serge Ibaka created a massive roster hole in the frontcourt, and various injuries and illnesses to just about every member of the starting lineup at some point forced head coach Nick Nurse to get creative with often overmatched lineups.

Playing the entirety of their home schedule at Tampa’s Amalie Arena with limited fans due to COVID-19 protocols, it was clear that the temporary displacement was taking a toll on just about everyone in the organization, even if they were able to use a modern arena located in a much warmer climate.

Nurse’s Tuesday availability offered some insight into the struggles the team went through, including a COVID-19 outbreak in mid-March that sidelined Nurse along with key players VanVleet, Pascal Siakam, and OG Anunoby, among several others.

Nick Nurse: "I would like to think that this team could have been a heck of a lot better than this…I've mentioned this a hundred times, that we were playing pretty good basketball until the COVID hit, and kinda spun out of control from there and never really recovered."

Toronto’s season was encapsulated best by two games in particular.

The first was their ninth loss in a row on March 22, falling 117-99 to the lowly Houston Rockets — a team that had lost an unbelievable 20 straight heading into their clash against the Raptors. As much as the Raptors were in the midst of a freefall, if there was ever a game to win, it was that one.

Two nights later, they followed it up with an inspired 135-111 victory over one of the NBA’s best teams in the Denver Nuggets on the eve of this year’s trade deadline, where Kyle Lowry put up a career-high +42 rating in what looked like it could’ve been his final game in a Toronto uniform.

The Norm Powell for Gary Trent Jr. (and Rodney Hood) swap the next day has been a positive one for the franchise, but there are still many questions about what the future of the team looks like. It’s a team that can beat just about beat anybody in the league on its best day, and it’s unclear how much of a rebound — if you’ll pardon the pun — the team can make for the 2021-22 campaign.

Optimistic thinking puts the Raptors back in Toronto for the start of next season, with COVID-19 cases in Ontario dropping steadily as vaccination rates increase. There’s still quite a way to go before the move home is confirmed, though Nurse is “very hopeful” they’ll be back at Scotiabank Arena for the start of the 2021-22 campaign.

I asked Nick Nurse how hopeful he is that the Raptors will start next season in Toronto and how disappointed he would be if that can't happen: "I'm very hopeful and I'd be very, very, very disappointed."

VanVleet and Siakam both have big expectations on the shoulders as franchise cornerstones, with team legend Lowry’s future currently up in the air as remains unsigned for next season.

But a home crowd, whatever that looks like, a vaccinated roster, and the comfort of friends and family by itself should at the very least provide a bit more stability next year for what will be a crucial bounce-back year for a franchise inching to return to contender status.