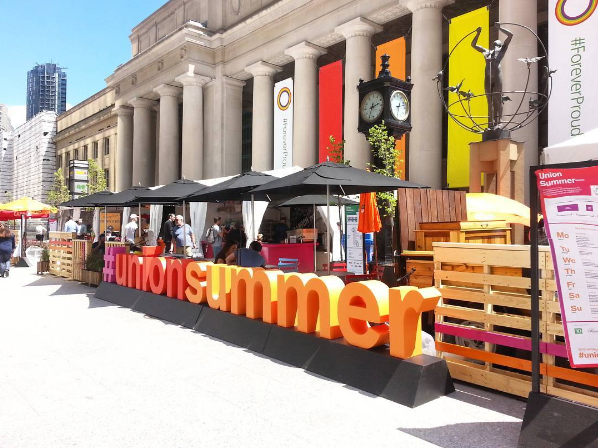 Summer at Union Station just got a hell of a lot better.

Launching yesterday, #UnionSummer is a 70-day long foodie event that features some 18-20 vendors set up in Sir John A. Macdonald Plaza.

Wicked day to be back at work! We’ve worked hard all spring organizing this years outdoor #unionsummer market for all you food lovers! Come check it out – open every day until 9pm 😜☀️🍦

Every single day this summer you’ll be able to hit up Union Station for some gourmet street food, entertainment, and drinks.

Additionally, P&L Catering will offer beer, cocktails, and local wines inside a licensed area from Thursday-Sunday between 12 and 9pm.

Co-hosted by Union and TD, there will also be “rotating mobile carts that feature both edible and non-edible goodies such as popcorn, candy, ice pops and fresh flowers.”

Essentially, #UnionSummer has everything you need to make your summer day even more special. We suggest you head down and see for yourself!

🎉🍦THIS IS NOT A DRILL! We’re all set up in our new summer home right in the heart of Toronto at @torontounion as a part of #unionsummer! 🎉🍦 . You can find our booth in Sir John A. MacDonald Plaza on Front Street, just west of Bay. . Union Summer is taking over the entire plaza outside Union Station from June 27th to September 5th, 2016. Co-hosted by Union and TD, the 71-day outdoor summer market brings an eclectic offering of food vendors, musicians, weekly film screenings and live performances . Open daily from 7am-9pm on weekdays, 11am to sunset on weekends. We will be serving from 11am daily.

#unionsummer market has begun! & @wildnorthflowers is reppin’ the all local blooms for your office or on your way home from work. catch them again on thursday from 3-7pm OR on the news tonight with @johntory buying a bouquet of their all local flowers. 💐