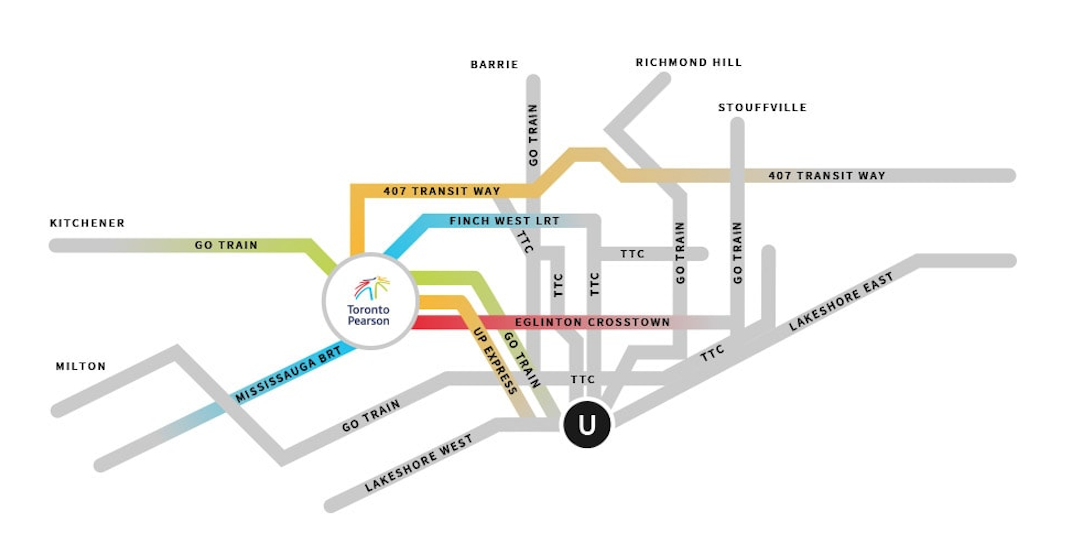 A major transit hub dubbed “Union Station West” could be coming to Toronto’s Pearson Airport within the next 10 years, connecting several public transit lines including GO, TTC, and UP Express.

The proposed project has been in the works since 2017, but was named this month as one of the Ontario Real Estate Association’s (OREA) top 10 future-changing projects.

The station, which is expected to be built by the early 2030s, would allow multiple transit modes to converge on the west side of this city. This would not only make switching between transit lines easier, but would give more direct home-to-airport public transit options for both travellers and employees needing to get to Pearson.

Plans for the station are still in a very early concept stage, but they show GO trains from both Union Station and Kitchener, the Mississauga BRT, the Finch West LRT, the Eglinton Crosstown, and the UP Express trains all connecting at the new Union Station West.

According to the OREA, it is predicted that having these transit options to get to the airport will take 43,000 vehicles off nearby roads daily, allowing riders to reclaim more than 3 million hours of time that is otherwise spent stuck in traffic every year.

The area surrounding Pearson, known as Ontario’s Airport Employment Zone (AEZ), is the second largest employment area in the province, according to OREA. The proposed transit hub is expected to double the already existing 330,000 jobs in the area by 2035.

“Toronto Pearson is Canada’s gateway to the world and an economic anchor for the region,” said Deborah Flint, OREA president and CEO, GTAA. “Improved transit connectivity in the heart of Canada’s second largest employment zone will fight climate change, improve access to jobs, and contribute economically in a growing province.”

Toronto Pearson also hopes that the new hub will alleviate some of the congestion at Union Station by providing an alternative connection point.

“Today, Union Station is the GTA’s only major ground mobility hub,” the project’s website reads. “About 90% of American metropolitan areas with 5-7 million people have at least two major hubs.”

For the new transit hub to work, there would need to be westward extensions on the Finch West and Eglinton Crosstown lines, which, according to Metrolix’s website, are currently unfunded but are being considered. In November 2019, the Greater Toronto Airports Authority committed $40 million to help extend the Eglinton Crosstown to Pearson.