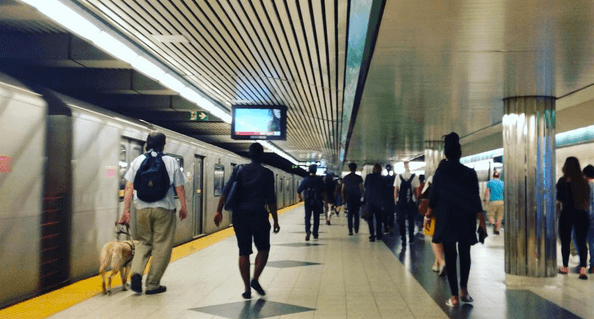 Toronto resident Bianca Spence was hailed a hero in the city today after Mayor John Tory accepted her TTC challenge.

Spence tweeted the challenge to the Mayor earlier this summer, garnering plenty of support from Torontonians.

I hereby challenge @JohnTory to ride Line 2 in a train with no A/C from Kennedy to Kipling. I'm serious. @TTChelps

And then again a few weeks ago, Spence tweeted at the Mayor asking him if he’d been on the subway during a heat wave. This tweet caught the attention of the Mayor’s office, and the meeting was set for the morning of September 7.

.@JohnTory Have you felt what a train with no A/C feels like during a heat advisory? You should. Because residents are suffering.

So the city held its breath as Toronto’s Mayor hopped on the non-airconditioned Line 2 this morning – like thousands of local commuters. Would he survive? Will he sweat? Will his train be delayed? Or perhaps, will he get shoved out of the way as the doors slowly shut?

But his ride seemed fairly uneventful, minus the lack of tie and jacket by the end of it. His one day action is clearly not enough for residents, who took to Twitter to express their (hilarious) thoughts on Tory’s big subway ride.

@JohnTory how was the subway ride bro

How the hell is John Tory in a button down shirt in the terrible heat of non air conditioned #TTC subway trains?

@JohnTory trying to be the hero promising Torontonians the TTC will do better re air conditioning at the end of the summer. lol

@JohnTory why didn’t you ride the subway in the afternoon – when it was actually hot instead of in the morning?

Thinking cooling thoughts for @biancaspence, who is taking Mayor @JohnTory on a cross-city sauna trip via the subway today.

Next project for John Tory: Spend a month in TCHC housing.

@JohnTory finally getting a taste of what Toronto commuters had to deal with all summer. Fucking sauna subway cars.

Omg it’s because Mayor @JohnTory went WEST to Kipling, against the AM traffic! That’s why he wasn’t bothered. #TTC #totransit

That John Tory is so hot right now. https://t.co/XAh0F8wbnH

But it wasn’t all bad, some were happy the Mayor stood by his word and took the challenge.

This morning a report ranked Toronto as the third best city to live, with some of its weakness being its transportation system. And no one is truly surprised.