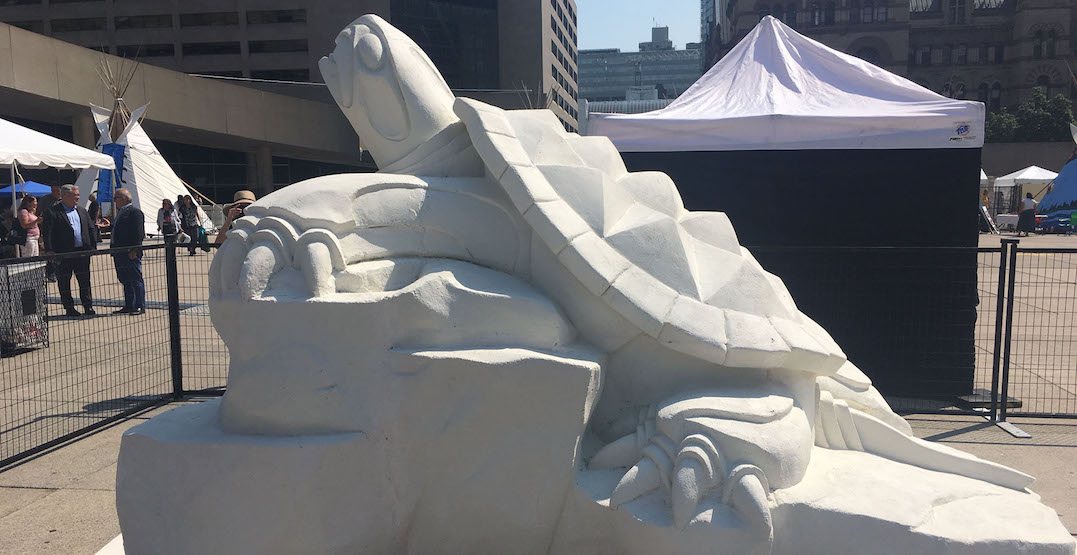 On Monday and Tuesday, the Indian Residential School Survivors (IRSS) Legacy Celebration is offering a vibrant cultural space at Nathan Phillips Square to honour residential school survivors and their families.

This celebration aims to create awareness of the IRSS Legacy Project, led by Toronto Council Fire Native Cultural Centre in collaboration with the city.

And yesterday, on the first day of the celebrations, details of the Legacy Project were unveiled. It consists of a replica of the still-to-come turtle sculpture, titled the Restoration of Identity, that stands six feet tall.

Artist Solomon King reveals a full-size model of the Indigenous restoration of Identity sculpture which will be placed at Nathan Phillips Square @TOCouncilFire pic.twitter.com/0zsDhzyyvR

Representing many First Nation creation stories, the sculpture embodies Turtle Island, also referred to as Mother Earth. The turtle stands on a three-foot-tall boulder, which will list the 17 residential schools that once operated in Ontario.

The legacy project will be permanently featured at Nathan Phillips Square.

The IRSS Legacy sculpture was developed in response to the Truth and Reconciliation Commission of Canada, specifically, Call to Action 82.

It calls upon provincial and territorial governments, in collaboration with survivors and their organizations, and other parties to the settlement agreement, to commission and install a publicly accessible, highly visible, residential schools monument in each capital city to honour survivors and all the children who were lost to their families and communities.