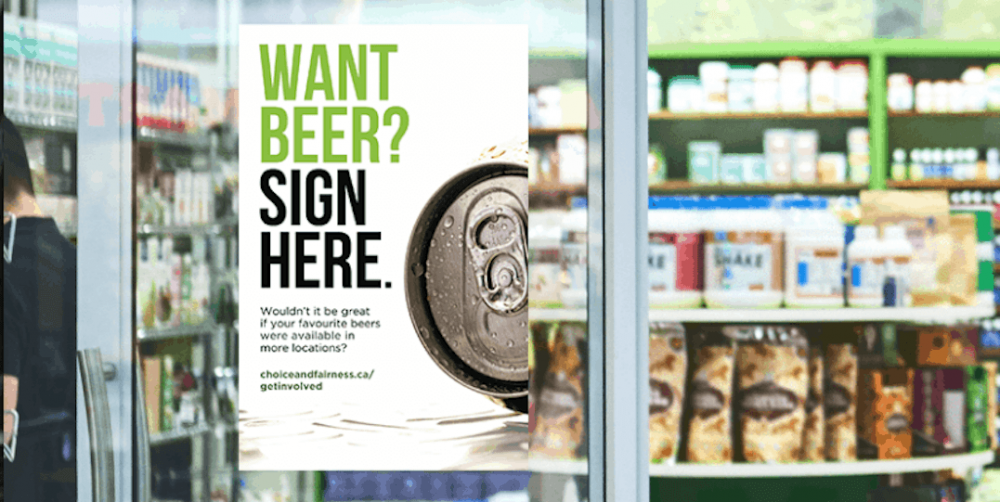 By now, commuting Torontonians have picked up on signs hinting at beer sales in the city’s subway stations.

Created by Choice and Fairness, the website that the Beer Store employee union demanded investigation into, the signs are posted on the windows of Gateway kiosks inside stations and read “Want Beer? Sign Here.”

The Choice and Fairness website breaks down the ownership of the LCBO, The Beer Store, privately owned retailers, and craft producers, while making a case for corner store alcohol sales.

The signs are posted on convenience store windows across the city, but they’re popping up in subway station asks the question: Would corner store alcohol mean subway station kiosk alcohol, too?

“In general terms, Gateway’s contract allows them to sell items available in convenience stores, including restricted items like tobacco. Although it’s speculative at this point, if the laws of the land were changed to permit other items to be sold in convenience stores, that could potentially apply to Gateway as well,” Stuart Green, a spokesperson for the TTC, told Daily Hive.

However, Green said, the contract contains language that does give the TTC discretion over items that could be deemed harmful to its reputation, or otherwise offensive.

“But we can’t say at this time that we would seek to prohibit the sale of alcohol if convenience stores were selling it,” he said. “Regardless of where it is purchased, our expectation, as always, would be that customers respect laws governing alcohol consumption in public.”