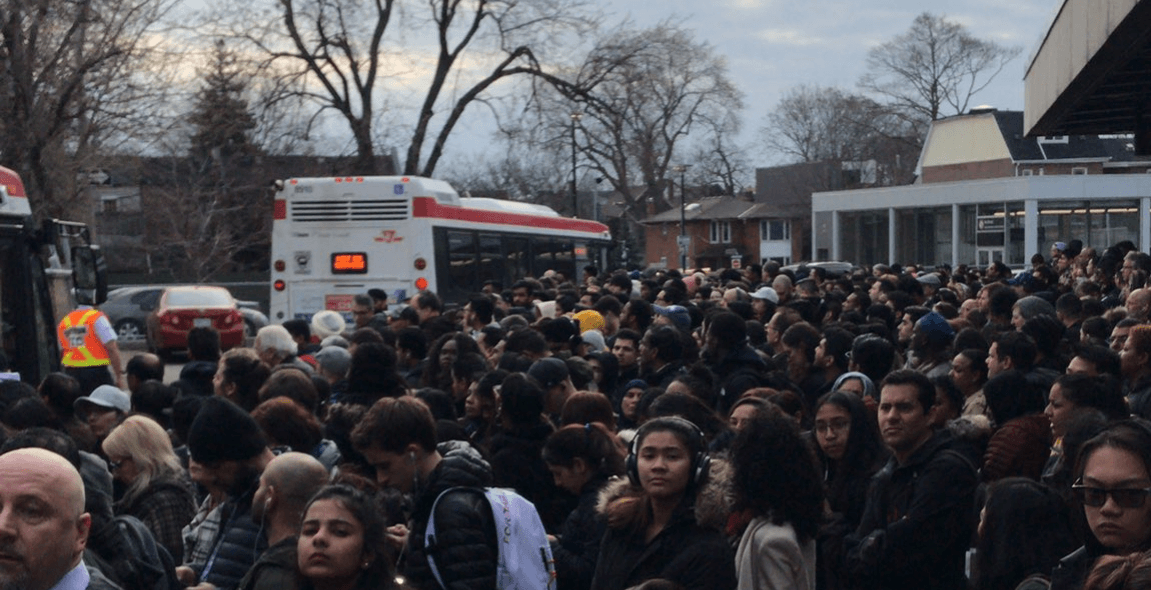 It’s been a rough start to the morning for hundreds of Torontonians today, as an earlier incident resulted in absolute chaos at Pape Station.

Just before 8 am, the TTC tweeted that there was no service between St George and Pape Station as crews responded to an injury at track level.

The transit authority also informed riders shuttle buses were on the way.

Line 2 Bloor-Danforth: No service between St George and Pape while we respond to an injury on the tracks. Shuttle buses are on the way.

About an hour later, the TTC said the regular service had resumed between St George and Pape stations.

And while some may have expected this meant their morning commute was about to get back on track, the absolute opposite occurred — the delay resulted in chaos at the station.

Photos shared on social media show massive groups of people crowding both the subway platforms and bus terminals at Pape Station this morning, a scene that could make anyone feel claustrophobic.

You can see riders cramming together while they waited for a service suspension to clear during peak rush hour, which is definitely not how you want to start your morning.

There are no shuttle buses, I’ve been at Pape for 15 minutes with no buses in sight to keep going so don’t give me that bs. How about the TTC have some respect for paying customers who risk losing their jobs on a daily basis because of your service pic.twitter.com/NAUlhqOKWk

Pape Station ten minutes ago. Rob Ford and John Tory could have had a relief line serving this station now. Doug Ford pushing that date further away. Instead everyone is boarding shuttle buses, and platform doors to prevent suicides are decades away on Line 2 #onpoli #TOpoli pic.twitter.com/Q134r1AT3A

Rough week commuting on the #TTC. No service from St. George to Pape this AM pic.twitter.com/yMIz03cAnE

The scene at Pape station. Subway shut down with zero communication from the #TTC bus driver @TTCnotices pic.twitter.com/Ce1eGlvBPo

⁦@metromorning⁩ ⁦@mattgallowaycbc⁩ …
@ Pape and Danforth this am …
contemplating why I was tweeting to you at 7:40am ? instead of catching an earlier train this a.m pic.twitter.com/cgRSlXDNyA

Just remember, if you’re ever late for work as a result of the TTC, the transit authority will actually provide late notes for commuters delayed by its subways, streetcars and buses.