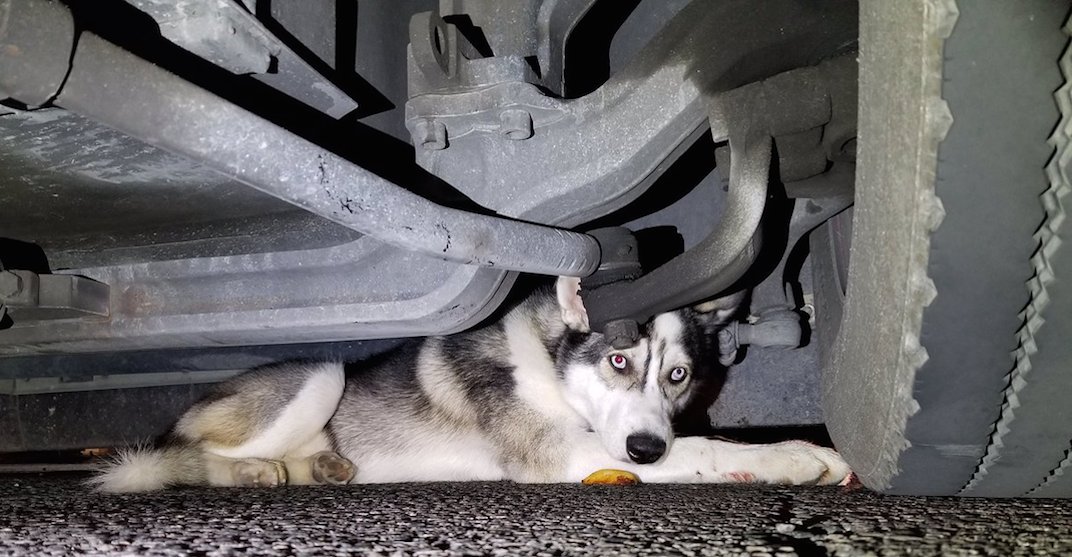 Update: Toronto Animal Services say that the dog has been reunited with his family. “Sober’s family was very worried about him, and have been searching for him since he went missing. They want to thank the TTC driver, Toronto Police and our staff for getting him the help he needed,” they said.

The Toronto Transit Commission is trying to reunite a husky with its owner after it was struck and injured by a car and hid under a TTC bus on Saturday evening in the city’s east end.

According to TTC spokesperson Brad Ross, the dog was struck by a car near Eglinton and Wardon and “injured and afraid, he took refuge under one of our buses.”

Ross said thanks to a TTC operator, supervisor, police and Toronto Animal Control, the dog was coaxed out and taken to a vet.

Unfortunately, the dog wasn’t wearing a collar and has no microchip and so Ross posted photos of the dog on Twitter in the hopes of finding its owner.

This sweet dog was struck by a car last night near Eglinton and Warden. Injured and afraid, he took refuge under one of our buses. Thanks to our operator, supervisor, police and Toronto Animal Contol he was safely coaxed out and taken to a vet. No collar or microchip. Know him? pic.twitter.com/uk2HnTsEdm

According to Toronto Animal Services, the dog sustained a right front limb injury and is currently receiving care and is stable condition.

“While no owners have been found, we are looking through our lost reports for a match,” said Toronto Animal Services in a statement on Twitter.

Thank you to everyone who’s contacted us about the dog that was rescued last night. This husky was injured by a car last night near Eglinton and Warden. He took refuge under a TTC bus, and was rescued by TTC staff, Toronto Police and Toronto Animal Services. pic.twitter.com/Q0B2QUUz0G

If you have information on this dog, contact 3-1-1 for Toronto Animal Services.