This weekend, from October 27 to 28, there will be two TTC service disruptions to plan for. Make sure you don’t get stuck this weekend.

Line 1: Portion of line to close

There will be no service on the portion of Line 1 Yonge-University between Lawrence and St Clair stations while Metrolinx crews continue construction of the Eglinton Crosstown LRT.

According to the TTC, shuttle buses will run frequently along Yonge Street, stopping at each station along the route.

At Lawrence, Eglinton and Davisville stations, customers can get on and off shuttle buses on Yonge Street. At St Clair Station, customers board inside the bus bay and exit on St. Clair Avenue East outside the station.

The TTC recommends that customers use the 97 Yonge bus, in addition to the University side of Line 1, as alternatives during the closure.

Customers are being reminded that wheel-trans will be available upon request from any station during the weekend. Customers can speak with a TTC staff member for more information about service frequency.

As Lawrence Station is not yet accessible, customers travelling southbound should get off at York Mills Station to make an accessible connection.

This Sunday only, Line 2 Bloor-Danforth will open late between St George and Broadview stations while the City of Toronto and TTC crews perform subway track work and maintenance on the Prince Edward (Bloor) Viaduct.

Shuttle buses will run between these stations and service is scheduled to begin at noon.

Shuttle buses will run throughout the morning with customers getting on and off buses outside each station, as follows: 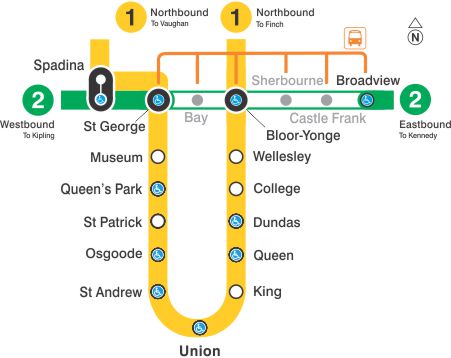 Wheel-Trans will be available upon request from any station during the weekend. Customers can speak with a TTC staff member for more information about service frequency.