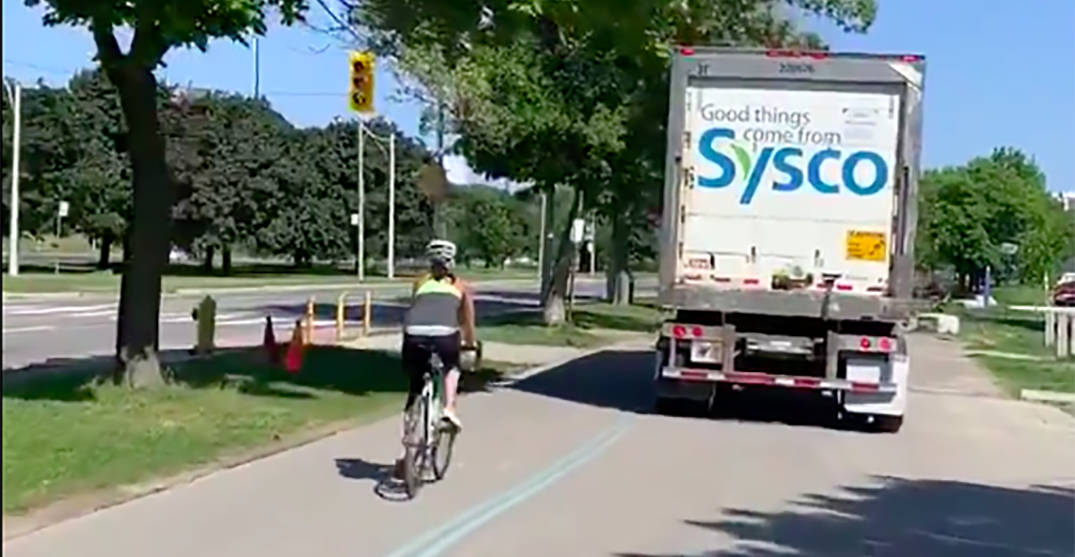 A transport truck was caught on video driving down a busy Toronto bike path.

In the footage posted to social media on Sunday, a large transport cargo truck is seen making its way through the centre of the Martin Goodman Trail.

JJ Wilson, who shot the series of videos, told Daily Hive she took the footage on the afternoon of Friday, August 14, while biking towards a “ghost bike” set up to memorialize the life of Xavier Morgan, a child who lost his life while riding a bike along the same trail.

Shortly before 3 pm, Wilson says she “noticed Sysco truck backing up towards me on the Martin Goodman Trail. He was to the north side of the trail taking out branches as he slowly backed up.”

Shocked at what she was seeing, she began recording the incident.

“People cycling westbound were going to the north of him and obviously had to ride on the grass to avoid him as there were people walking and cycling on the south side.

In the series of videos, the truck is seen travelling down the middle of the path while cyclists are forced to work their way around it. At one point the truck appears to be exiting the bike path, but performs a multi-point turn before turning onto the road.

@SyscoCanada
Arrived at this location to witness your driver backing up on the Martin Goodman Trail!!

Did he really move this rig backwards all the way from the parking lot east of The Pool?!

The driver’s goal appears to have been to reach the Sunnyside Pavillion, and Wilson says he stopped there to unload. When she approached the driver to ask why he had been on the trail, he said other vehicles were blocking the entrance through a parking lot.

Whatever the reason, the video shows the truck having some very close calls, especially while reversing, causing more cyclists to dodge around it. No one has been reported injured.

Wilson says she has also reported the incident to the police and sent a copy of that report to her city councillor.

Daily Hive has reached out to Sysco and the Toronto Police Service for comment and will update accordingly.