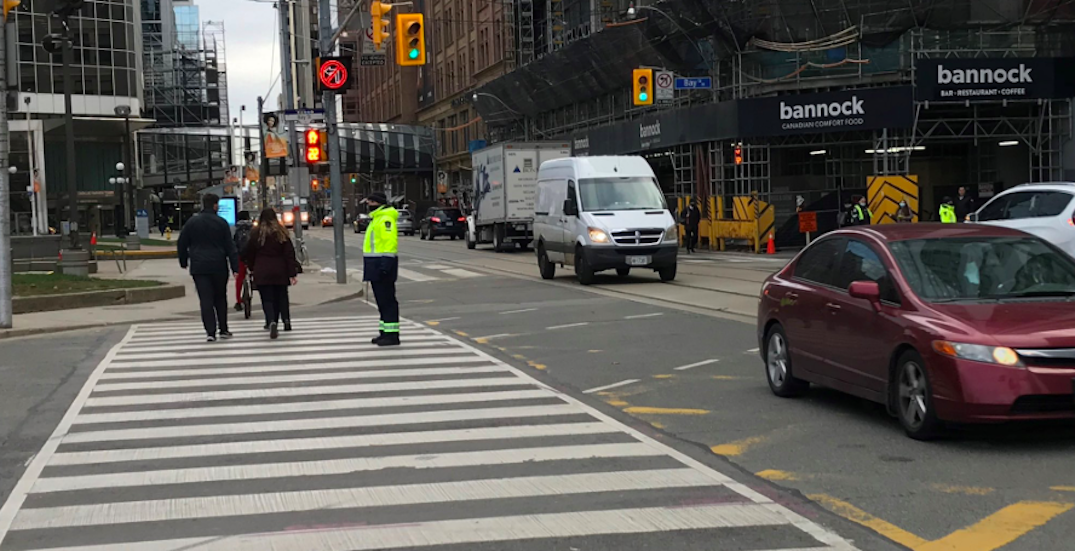 The City of Toronto has deployed 16 traffic agents to manage busy intersections in the downtown area.

On Wednesday, Mayor John Tory announced the launch of the new “Traffic Agents” and is the first city in Ontario to deploy them on its streets.  The program also has two supervisors and a program manager.

The new hires will work full-time and will be available during peak morning and afternoon rush hour periods.

“Traffic Agents will make a difference on our streets. These agents have been proven as an effective way to keep traffic moving by ensuring motorists, cyclists and pedestrians comply with the traffic signals; by helping reduce potential collisions; and by reducing the blocking of intersections,” Tory said in a statement.

“I look forward to seeing the new agents actively managing traffic at key locations in the city.”

There are 11 key intersections that have been prioritized for traffic agents to manage:

As the program evolves and potentially expands, it’s expected that other locations across the city will be identified and included.

According to the City, one or two agents will be deployed to a single location depending on the size and complexity of an intersection.

Even though there is an ongoing pandemic, City staff have continued to observe increasing traffic volumes as well as new peak traffic times, hence the need for this new program.

“Actively managing intersections is a proven and effective way to keep traffic moving by ensuring all road users comply with the traffic signals, helping to reduce potential collisions and reducing occurrences when vehicles are stopped in the intersection after the signal has changed, which prevents on-coming traffic from travelling through (known as ‘blocking the box’),” the City statement added.