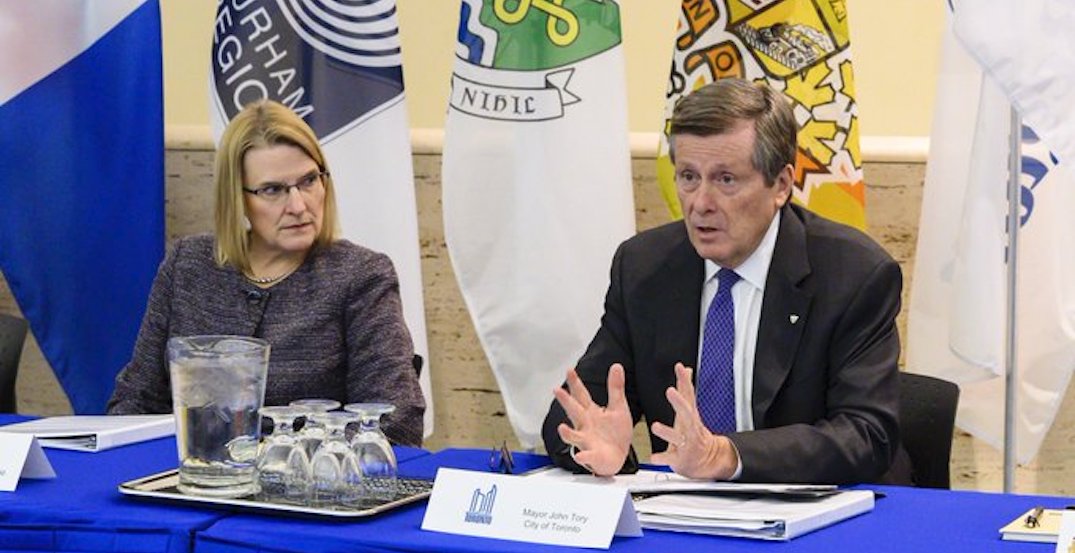 It is only the 28th day into 2020, and Toronto police say there have been 23 shootings in the city so far.

And on Tuesday, Mayor John Tory met with mayors, regional chairs and police chiefs from across the GTA, along with MP Joël Lightbound, Parliamentary Secretary to the Minister of Public Safety & Emergency Preparedness Bill Blair, and Ontario Solicitor General Sylvia Jones, to “discuss the ongoing challenges of gun and gang violence in the region.”

Held at city hall, the group released a joint statement, collectively calling for all levels of the government to help stop the violence.

As part of their agreement in the meeting, the group called for tougher bail and sentencing laws to “send a clear message that gun violence is not acceptable and those who engage repeatedly in it will face real consequences from our justice system.”

“We believe it is important to send a clear message that gun violence is not acceptable and those who engage repeatedly in it will face real consequences from our justice system,” read the joint statement. “We also support additional cooperation with the Government of Ontario and the Government of Canada to increase electronic bracelet monitoring for those on bail, including the matter of funding for same.”

Meeting with elected representatives and police chiefs from the GTA this morning to talk about how we can work together to tackle gun violence – an issue that I believe is one of the most important we face as leaders in our communities. pic.twitter.com/Jp3FL1OD5I

They also want increased investment in border security to ensure that Canada is doing everything it can to stop the flow of illegal guns from the US.

“While police services cooperate now, it is clear more cooperation between municipal and regional services along with the Ontario Provincial Police, RCMP, Canadian Border Services, and US law enforcement is needed,” they said. “Our police services have been clear that the vast majority of guns being seized are illegal guns from the US.

“We acknowledge that the Government of Canada has made investments in border security in the past but we must urge the government to take further action.”

The agreement between the governing bodies stated that municipalities need additional investments from the province and feds to help fund programs for kids and families in communities who are at risk.

“We have committed to jointly advocating for those investments, including in matters related to mental health and addiction, over the coming months. We believe it is important that the Government of Canada begins making these increased investments starting in the 2020 federal budget.”