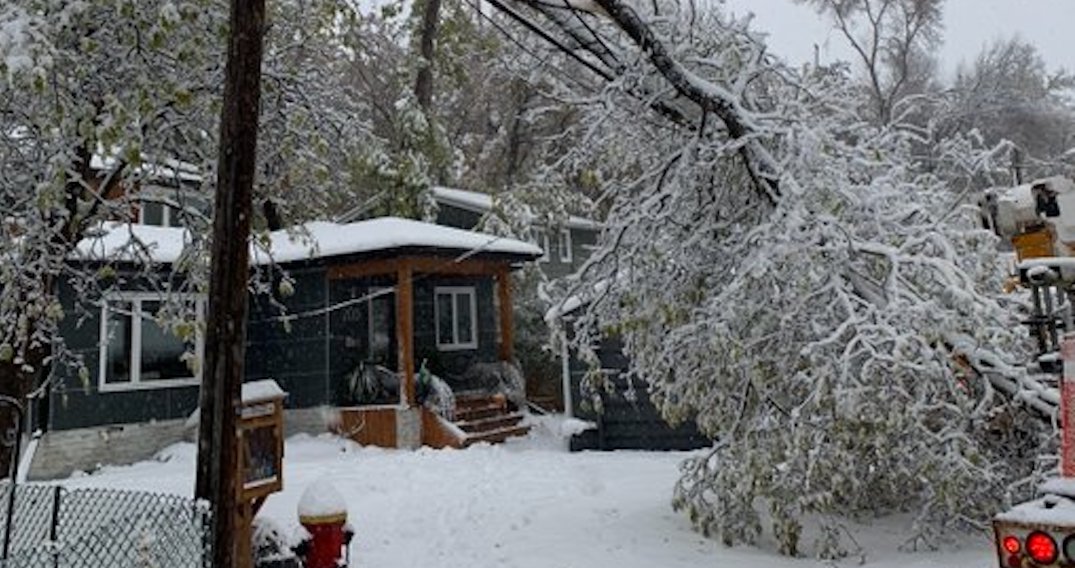 After an early winter snowstorm pummeled Manitoba, including Winnipeg, with blizzard-like snowfalls this month, the City of Toronto is sending in an emergency crew to help with storm damage cleanup.

On Sunday, Toronto sent 25 Urban Forestry staff to help with the cleanup as Manitoba continues to deal with unprecedented weather conditions.

The city said and crew members are expected to arrive in Winnipeg on Tuesday and should return back to Toronto on November 8.

Both the city of Winnipeg and the Province of Manitoba have declared a state of emergency.

City of Toronto staff and equipment will support the ongoing efforts of Winnipeg, neighbouring Winnipeg municipalities, and Saskatoon to mitigate weather effects of flooding that started with record September precipitation followed by a week of record October snow and rain.

These conditions have resulted in mass power outages and damage to approximately 30,000 city trees.

Along with the Urban Forestry crews, Toronto is also sending in chipper trucks, aerial towers (bucket trucks), and other forestry equipment.

Torontonians are proud Canadians and always ready to help their neighbours which is why we are happy to send emergency help to the @cityofwinnipeg as it recovers from the terrible storm which damaged 30,000 trees. Thank you to our team who headed out today for #mbstorm efforts. pic.twitter.com/Co1x2jARgB

“We are happy to provide help to our neighbours in Winnipeg as they work to recover from these unprecedented weather events,” said Mayor John Tory.

“I want to thank our Urban Forestry crews for the work they are undertaking over the next few weeks to respond to this emergency and help our fellow Canadians. This is a true example of how during challenging times, we come together to support each other.”

According to the city, the cost of Toronto’s emergency assistance will be covered by the City of Winnipeg.