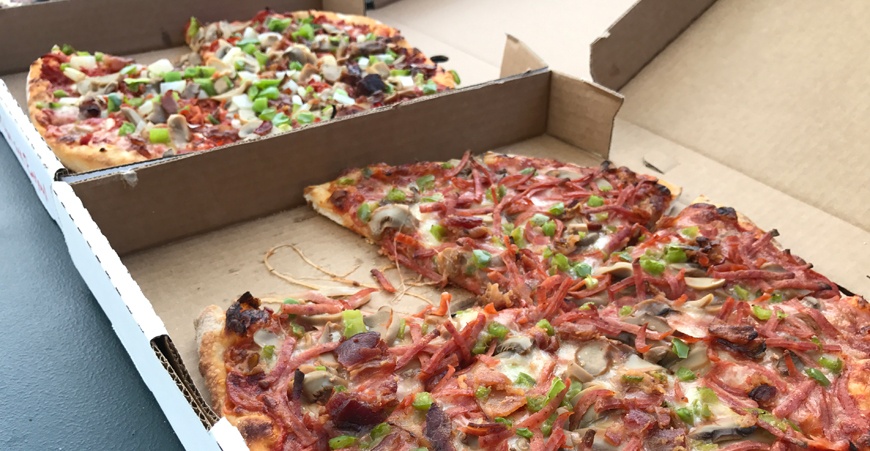 Windsor pizza is legendary in some circles.

If you talk to Windsor native and NOW Food Editor, Natalia Manzocco she’ll tell you, “Windsor pizza is kind of a perfect hybrid between fancy thin crust Italian authentic pizza –which Windsor has tons of – and doughy, trashy delivery pizza. It’s the best of both worlds.”.

Some lady in Regina has even had Windsor pizzas delivered overnight by UPS. That qualifies as legendary doesn’t it? 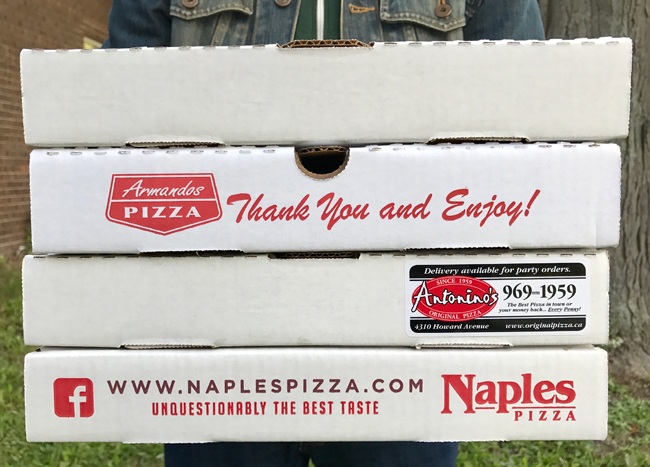 I ended up in Windsor on behalf of Feast On, a branch of the Culinary Tourism Alliance whose mission it is to promote local eating. They were very polite about the fact that I drank too much beer (this is something the region really excels at) and ultimately missed out on eating at the only Feast On-certified restaurant in the city.

Instead, I squandered their budget sampling my way through the city’s thriving pizza scene (seriously, pizza is to Windsor what Tim Horton’s is to Hamilton).

I suspect they won’t be asking me back anytime soon. 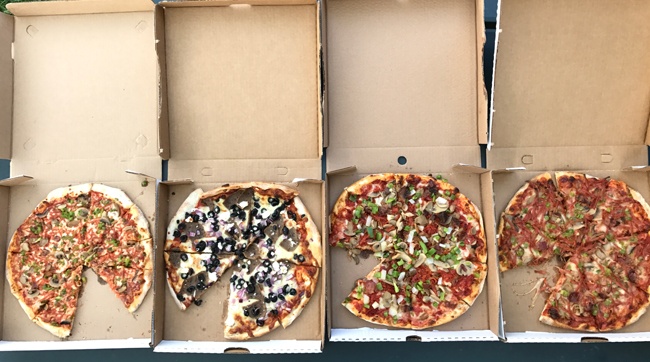 There is no real emphasis on fresh or gourmet toppings. Canned mushrooms, olives and pineapple are little like a time warp back to the ‘90s; the signature combination of pepperoni with onions, mushrooms, peppers, and bacon is pretty classic, a variation of “Deluxe Pizza” commonly found in the 6ix.

Most notable; green peppers and onions are diced rather fine, meanwhile, pepperoni is julienned into slivers. Toppings are applied generously and always on top of the cheese.

When it comes to pizza crust, there’s more variation: some seemed more like pan pizzas, a shallow deep dish if you will, featuring a lip of dough that encircles the pie and provides definition between crust and toppings. In other cases the sauce and cheese bled into a puffy, toasty cornicione.

It’s not the kind of pizza that folds either. The base is thin and crisp, not pliable.

So who makes the best one?

I still have no idea. Not even the locals can come to a consensus.

Antonino’s, Armando’s, Arcata, Capri, Naples, Riviera, and Sarducci’s all got mentions in a very informal survey.

My list of “must-tries” changed a few times before finally settling on four different establishments. Then came the task of collecting each pizza personally so that the first slice could be consumed ASAP for that hot-from-the-oven first impression. 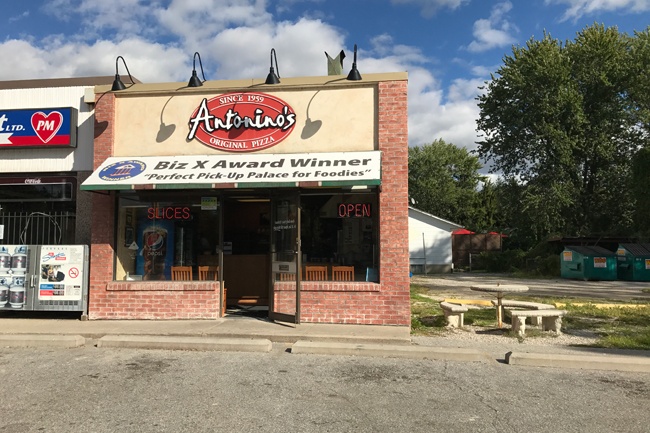 This pizza was the absolute cheesiest and the toppings were especially plentiful. The aforementioned slivers of pepperoni curled up as they crisped and big chunks of bacon applied sparingly contributed pops of salty, porky goodness. 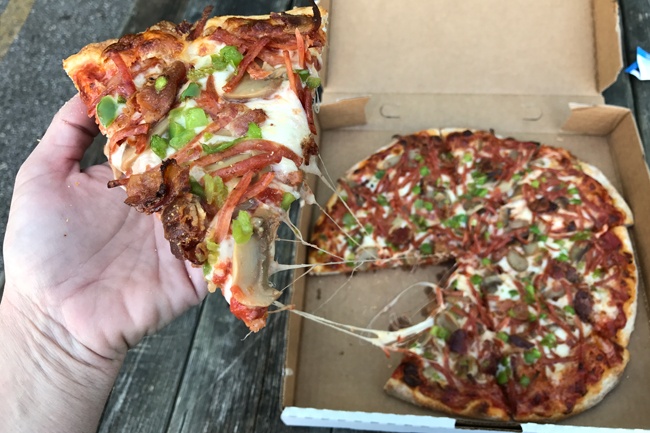 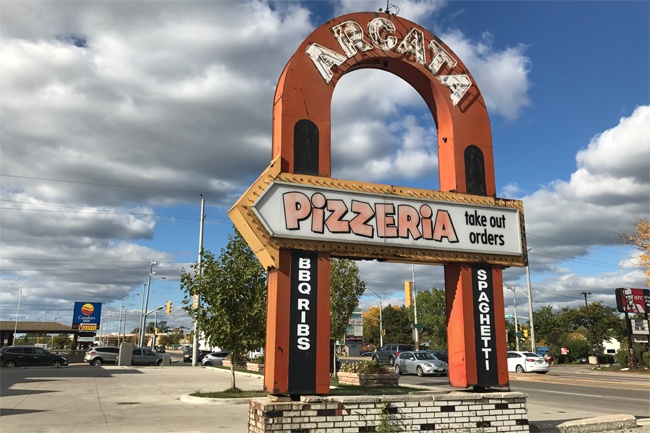 I should have ordered the Super, akin to all the other (green pepper, pepperoni, bacon, mushroom) pizzas I tried elsewhere, but the Greek pizza advertised with gyro meat from Arcata was just too intriguing.

This pizza was stylistically different, but still very good. The crust was thin and cracker-like, the cheese not so gooey or stringy but the fresh red onions were a welcome addition.

Gyro on pizza was a novelty for me and a cross-cultural mash-up I’d be keen to see again. 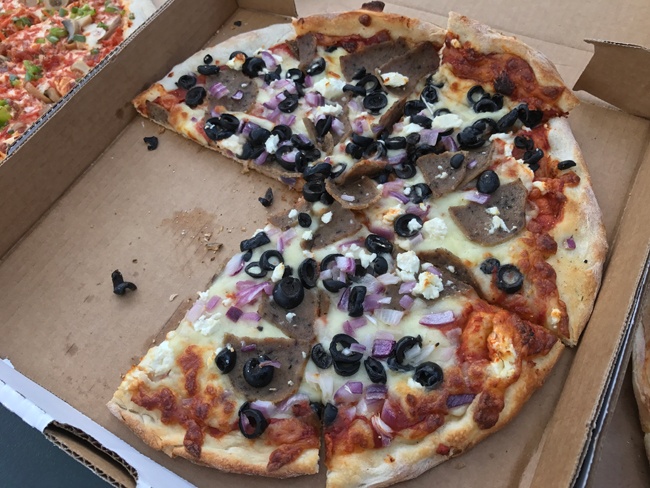 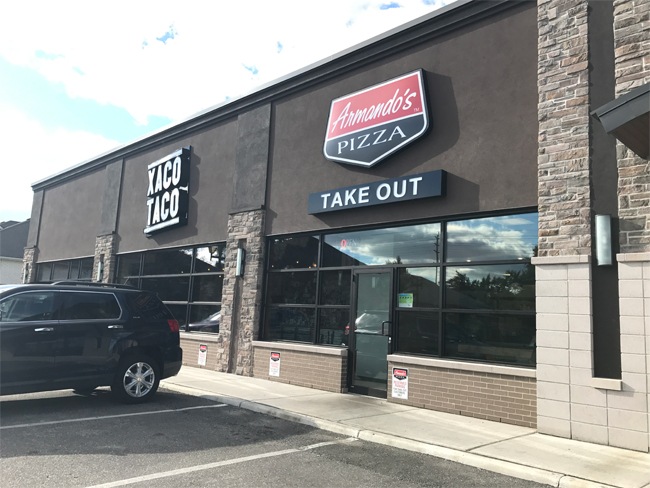 Having won third place at the 30th annual International Pizza Expo, Armando’s was an absolute must on my list. Even if the locals called it overrated…

The pizza from Armando’s was encircled by a thin lip of golden crust. The toppings were abundant, but this pizza was undercooked. The onions and green peppers were practically raw and could have benefit from a little broiler action.

Big points for the bacon on this one which isn’t strip bacon so much as chunky, meaty lardons. Pepperoni on this one was a little sparse. 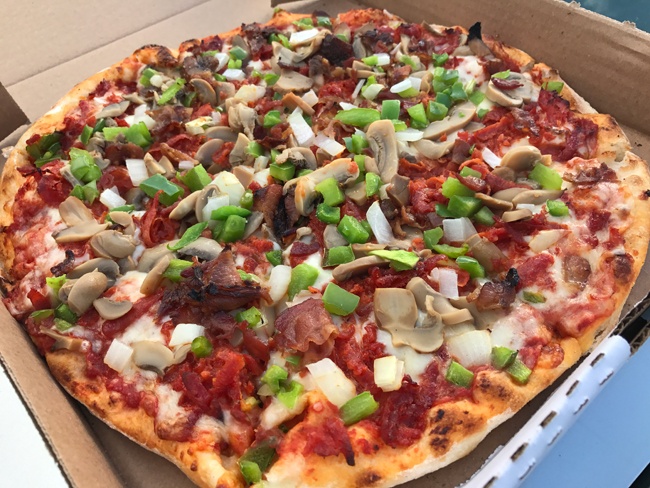 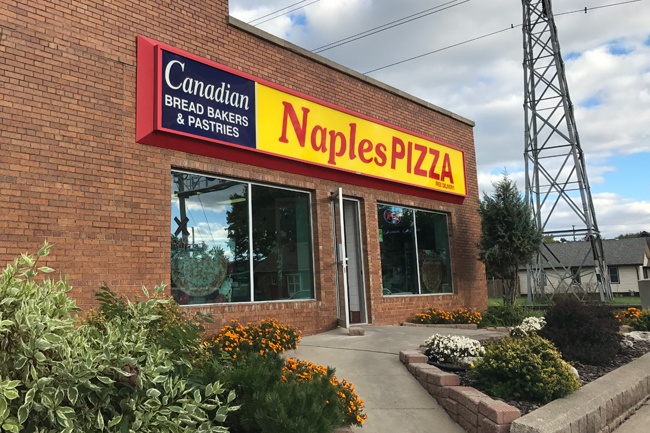 The ubiquitous chain has obviously done well for itself with 18 locations scattered across Southern Ontario from Windsor to London. One local described it as a “dirty classic.”

This pizza was perhaps the least carefully prepared: the slices were all different sizes and topping coverage was irregular. Toppings in proper proportions are nicely crisped over the cheese but it all still amounts to one satisfying pie. 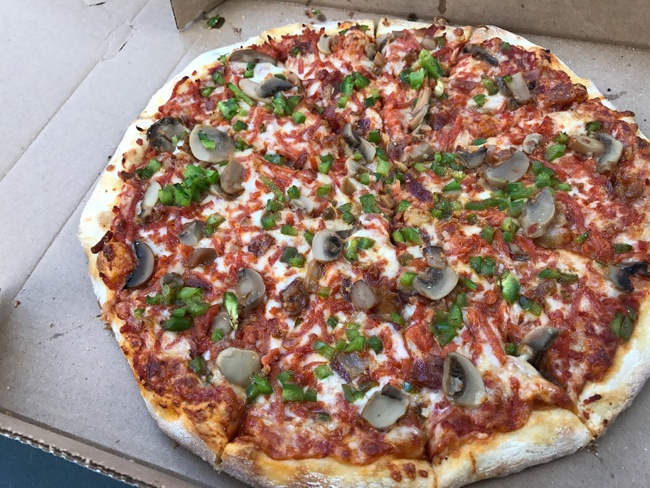 And while I still can’t tell you who’s was the best, I can tell you I thought the winner was for me.