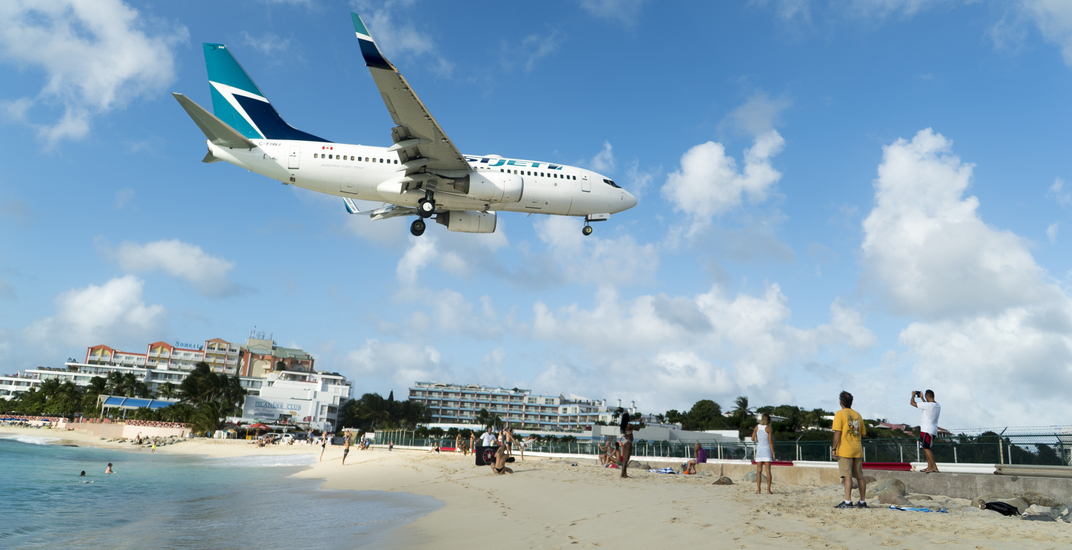 Significant changes in weather conditions and visibility were key factors in the extremely close landing of a WestJet flight in St. Maarten in 2017, says a report released by the Transportation Safety Board of Canada.

Fight 2652 from Toronto was attempting to land in St. Maarten when tourists spotted it flying too close to the water. So close, in fact, they were able to take selfies with the incoming plane.

A video posted to YouTube by ATCpilot described the landing, saying “only a few feet missing and the Boeing jet from Toronto could have crashed into the water. A shocking moment for all of us at the sunset bar on Maho Beach, St. Maarten.”

The plane flew back up and returned over 30 minutes later to land successfully.

The newly released report indicates that weather and visibility were initially good prior to landing. However, as the plane approached, “the controller advised the flight crew that there were moderate to heavy rain showers at the airport,” which significantly reduced visibility.

According to the report, the crew did not acknowledge this information and continued with its approach.

Due to the moderate to heavy rain showers, the airport’s runway lights were turned on to the automatic setting. This slightly increased the brightness of the runway lights, however, it decreased the visibility of the precision approach path indicator lights.

According to the report, the low-intensity settings of the lights limited the visual references available to the flight crew.

Because of this, the pilot “misidentified the runway,” and mistakenly lined up “an incorrect visual reference,” which was a hotel situated to the left of the runway.

This led to inadequate altitude monitoring, which reduced the crew’s situational awareness, the report found. As a result, the crew did not notice the aircraft had descended below the normal 3° angle of descent to the runway.

“The lack of visual texture and other visual cues available over water contributed to the crew’s inability to detect the aircraft’s reduced height above the water,” reads the report.

Even once the aircraft passed through the rain shower, the flight crew were not able to accurately assess the plane’s height above the water and the pilots continued to descend while correcting their approach toward the runway.

When the aircraft was 63 feet above the water, the aircraft’s enhanced ground proximity warning system (EGPWS) issued two alerts of  “TOO LOW, TERRAIN” as the aircraft passed from  54 feet to 49 feet.

Transportation Board of Canada

When the aircraft was 40 feet above the water, the crew initiated a go-around. According to the report, the lowest altitude recorded by the EGPWS during the descent had been 39 feet above ground level.

The Transportation Safety Board report also noted that WestJet originally assessed the situation as a “non-reportable event,” which means the digital flight data recorder  and cockpit voice recorder “were overwritten and were not available to the investigation.”

According to the report, there were no reported injuries and no damage to the aircraft, property or objects.