Toronto-Waterloo has placed 14th globally for its startup ecosystem, according to a global report.

The 2021 Global Startup Ecosystem Report, by Startup Genome and the Global Entrepreneurship Network, was launched this week and bumped Toronto-Waterloo up four spots from last year. This is the highest the area has ranked in the history of the report.

MaRS Discovery District and Communitech, alongside the University of Waterloo and Region of Waterloo, worked together to highlight Toronto-Waterloo’s entrepreneurial strengths.

“I am pleased to see Toronto-Waterloo rising rapidly in the ranking of the Top 30 ecosystems globally. The last two years have presented harsh conditions for everyone, but the upward trajectory of the Toronto startup scene has been a bright spot. With increases in the number of venture deals, IPOs and some of the biggest ever global investments in Canadian technology companies, everything is lined up for a very strong rebound and Canada’s most vibrant startup scene is playing a major role,” MaRS Discovery District CEO Yung Wu said in a press release.

Toronto-Waterloo is the only Canadian region to place in the top 15 of the list. 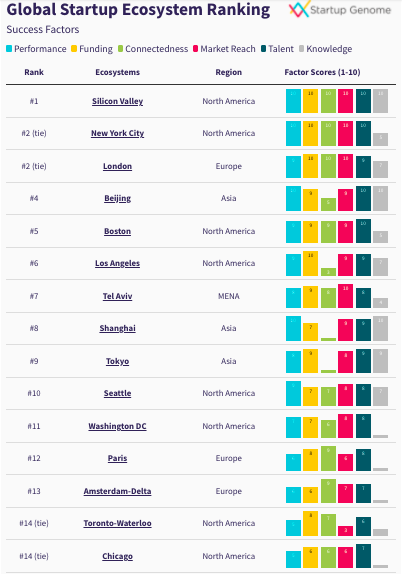 “Being the sole Canadian ecosystem to place in the Top 15 rankings is reflective of what we know: there’s no better place to start and grow a global tech company than here in the Toronto-Waterloo Corridor.” CEO of Communitech Chris Albinson said.