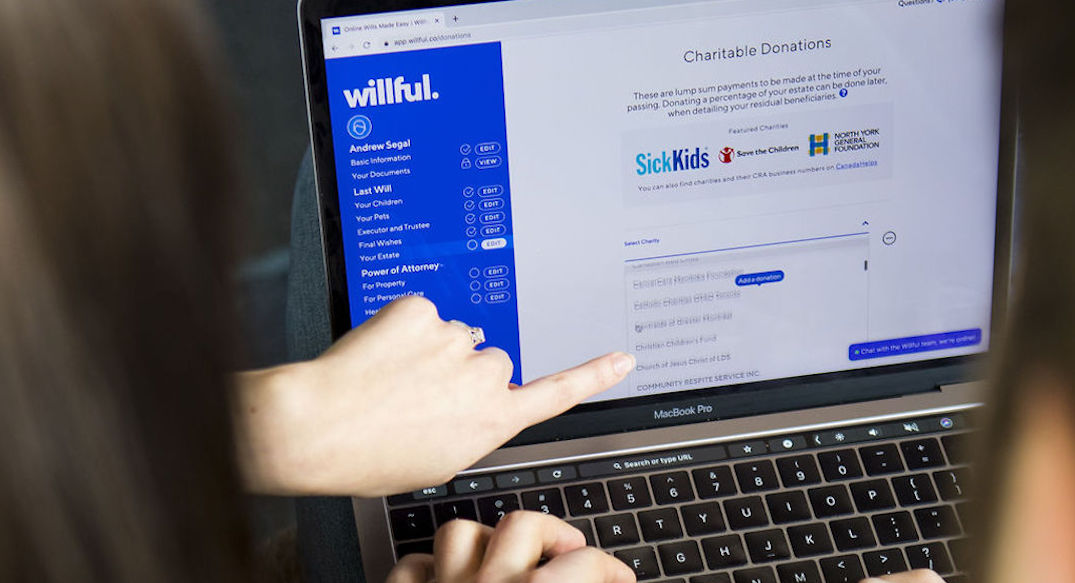 Willful, a Toronto tech startup that offers online wills, has seen an exponential increase in Canadians requesting to have their wills done since the start of the COVID-19 pandemic.

According to Erin Bury, the CEO of Willful, traffic and sales started to increase around mid-March as the physical distancing and closure measures escalated in Canada.

In March, the company’s sales were up by over 40% compared to February, but in April, the traffic increased to 490% compared to the same period in March, as have sales at 400%.

“While we wish people weren’t coming to complete these documents because of fear and anxiety around COVID, these are essential documents that people need to have,” Bury told Daily Hive.

Willful was founded in 2017 by Bury’s husband, Kevin Oulds, to help people easily create their will and Power of Attorney documents online, in addition to providing a platform to store other key information for the family and executor.

In a survey commissioned with AngusReid, Willful found that 57% of Canadian adults did not have a will and that number increased to 89% among people under the 34-years old.

As the pandemic ramped up, Bury said the company began to hear from healthcare workers who were being urged by their bosses and hospital administrators to get these emergency planning documents in place.

“As a digital product company, we can’t produce PPE, but we thought the best way we could help was by giving free plans to frontline healthcare workers who are risking their lives to keep us safe,” Bury said.

Two weeks ago, Willful launched an initiative committing to give away 1,000 plans.

So far, the startup has exceeded expectations by giving away over 1,300 plans to healthcare workers across Canada, and are still seeing “tons of requests come through.”

“While we originally said we would give away 1,000 plans, we’re now committed to giving away as many as we can knowing this crisis will be going on for longer than expected.”

Typically, if someone visits a lawyer a will can cost anywhere from $400 to thousands of dollars depending on the region.

Willful offers plans ranging from $99-$249, and those prices include future updates for free — often individuals update their will several times throughout their lives.

To date, the company has made 20,000 documents for customers across seven provinces.

Hearing from healthcare workers on the frontlines

Bury said her friends Nadine and Curtis Parker had been meaning to do their will for quite a while, but the pandemic was really the catalyst to get it done. Curtis is an ER nurse, who is mostly working from home doing virtual training at Sheridan College and could be called back into the ER at any time.

On top of that, Nadine is four months pregnant with identical twins. For Nadine, getting the will done was a huge weight lifted off the couple’s shoulders.

For Sunta Sem, CMO of Willful, a story that stayed with her is from a nurse in British Columbia who never had to think about writing her will before because of her work, but now with the pandemic, she had to confront writing the document, and it made her scared.

“A lot of the stories are like that,” Sem said. “People thinking of their families and wanting to make sure they had a plan for their children.”

Bury noted that doctors, nurses, and other frontline workers have written to them saying that’ve procrastinated on getting a will done for years, but now the pandemic has caused a sense of urgency.