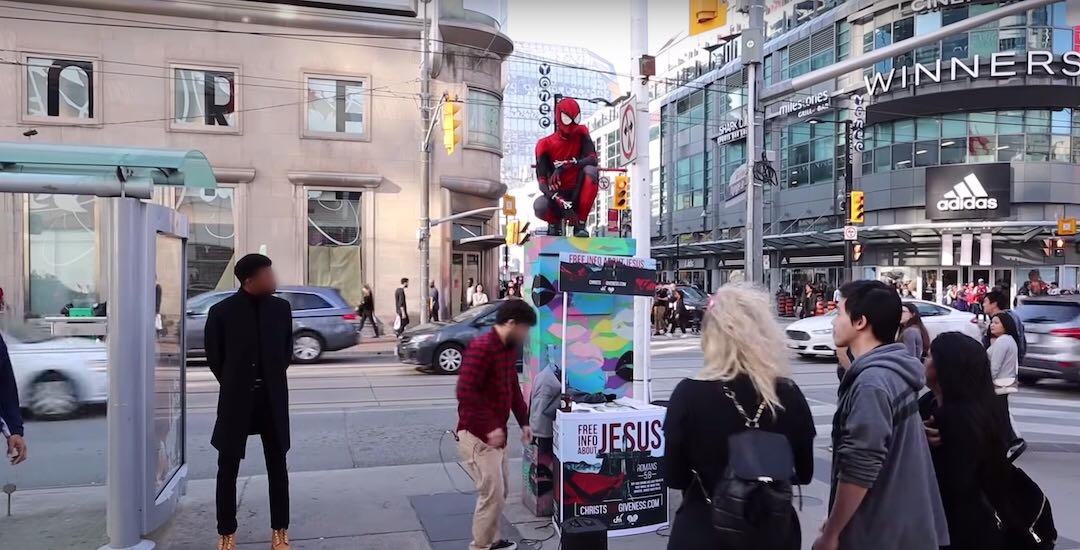 It might seem hard to believe, but in just under a week there have been two incidents involving Spider-Man performers that have ended up with police involvement in Toronto.

The latest incident to make headlines this week involves a Spider-Man performer getting into an intense stand-off with some street preachers near Yonge-Dundas Square.

A video posted online by the gospel preaching group Torch of Christ Ministries, calls the young busker the “antichrist” and says the performer “completely lost his mind” while the group was preaching in the Square.

In the video, which has already been viewed over 10,700 times in just two days, the group is preaching to pedestrians via a loudspeaker.

The performer approaches the religious group and begins confronting them for taking up permit space, where he “wants to work,” referring to the very busy corner at the Square where buskers often perform.

A member of the religious group begins to call him childish, which only escalates the situation. The performer informs the group he is a Roman Catholic and they believe in the same God, and asking them to “turn the other cheek.”

Tensions between the performer and the group continue to build, which eventually leads to Spider-Man talking to the police.

The video of the incident was recently shared in a neighbourhood Facebook group, and comments suggest the same religious group has recently been causing disturbances in other parts of the city.

“There was a religious group at Baldwin and Kensington Street with a loudspeaker and a cameraman while local residents were banging on pots and pans trying to disrupt the preaching,” wrote one Facebook user, adding, “there were three police cars there controlling the scene. Seems like the religious group was out on a mission across the city today”