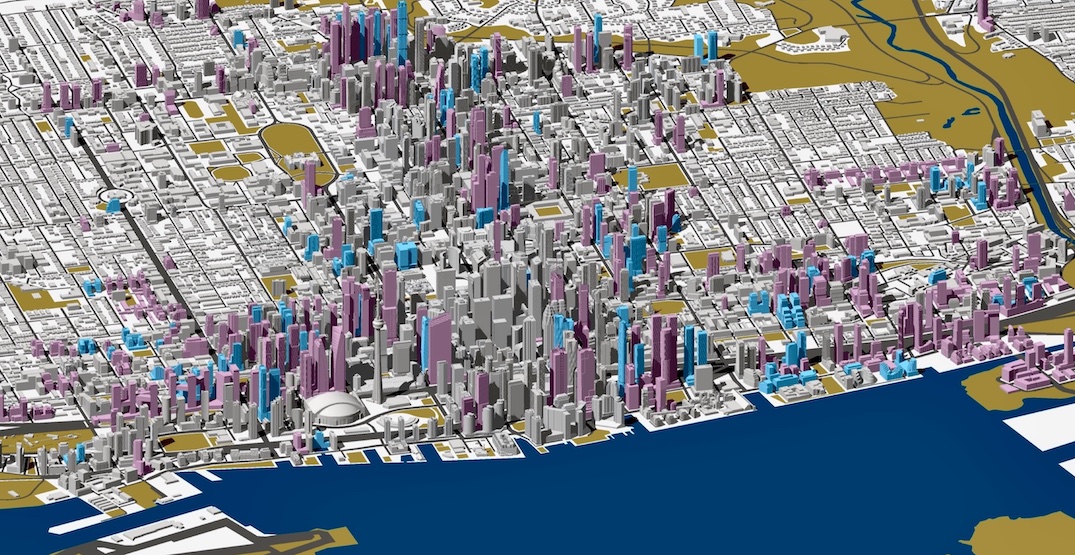 It may feel like the Toronto skyline is getting taller and denser by the day, but by the year 2030, it will be indisputably so.

Toronto-based digital marketer Stephen Valesco compiled a model of what the city will look like come 2030 based on development applications. Toronto, with its notoriously high number of cranes up in the sky, will appear much denser in the coming years, particularly in the downtown core — something Valesco has dubbed the “Manhattanization of Toronto.”

The Manhattanization of Toronto and resiliency of Toronto real estate continues, with little signs of slowing. Visible in this image, development in the Downtown Core as it appears toward the end of 2021. #Toronto #CityofTO #future #torontorealestate pic.twitter.com/9FojOpmIKE

“Over the past decade, we’ve seen a lot of changes in the entertainment district in areas like King, West, Queen West, and that’s certainly going to continue,” Valesco told Daily Hive. “Also along Yonge Street, between Bloor and Dundas, there’s a number of high rises there that are going up as well.

“Another area also to look out for is along the eastern waterfront. And also in lower Yorkville there’s a number of very tall towers that are being proposed. So as a whole, there’s a lot of development happening in the downtown core, but you can definitely see how certain neighbourhoods are being densified.”

Valesco began working on the model in 2017 as a personal project but has continued to update the renderings in recent years as new development applications are filed and approved. He has since shared several updated renderings of the city on Twitter.

As cool as being able to take a peek into the city’s future is, when it comes to Toronto development, plans and reality can be two totally different things, meaning we’ll just have to wait another eight years to see what the 2030 skyline ends up looking like.