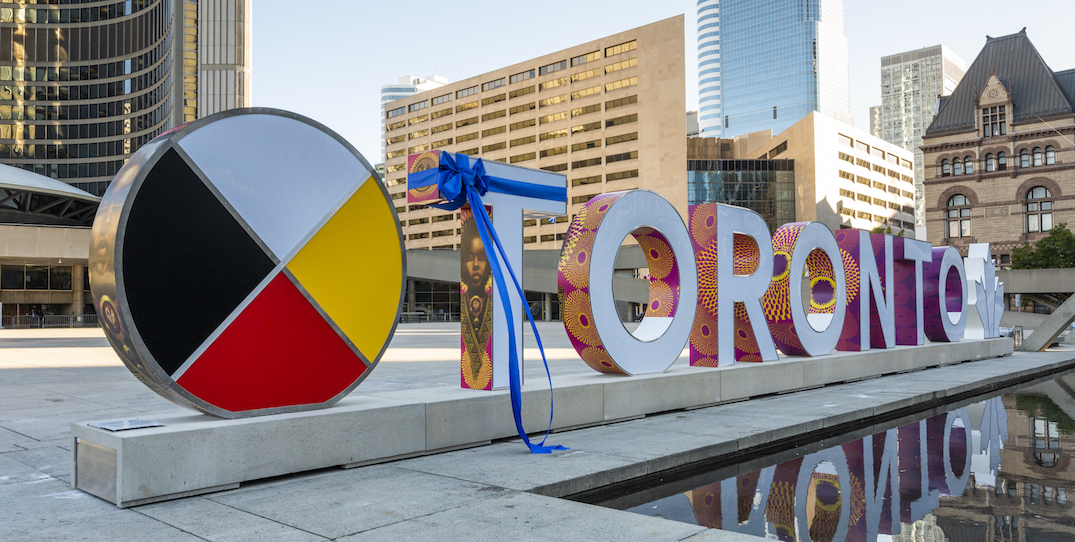 Mayor John Tory unveiled the new Toronto sign and it has a design with a special meaning.

On Friday, in Nathan Philips Square, the design was revealed to recognize the United Nations’ International Decade for People of African Descent. The vinyl wrap around the letters — which will be replaced every 12 months with a new design — is called Patterns of the People, done by artist Danilo Deluxo McCallum.

His work was selected by a community jury out of other submissions.

The Toronto Sign is back! The @cityoftoronto unveiled the newly rebuilt sign along with its first wrap, Danilo Deluxo McCallum’s Patterns of the People, in recognition of United Nations’ International Decade for People of African Descent. Learn more at https://t.co/wKQAO5RjLE. pic.twitter.com/L5rpWsR0Xn

McCallum is a Toronto-based multi-disciplinary artist, graphic designer, and curator whose practice is rooted in the art movement known as Afrofuturism.

His design for the wrap uses colourful African fabric patterns as a backdrop to represent the diverse community of people of African descent in Toronto.

And woven into the patterns are African cultural symbols such as the Adinkra Sankofa bird, “which represents the importance of moving forward by recalling the past.”

Interspersed with these symbols are portraits of Canadians of African descent, “asserting the beautiful, bold and proud presence of Black communities in Toronto.”

“I am pleased to see that as part of the unveiling of our new sign, the first wrap will recognize the International Decade for People of African Descent. This sends a powerful message to our residents and the world that Toronto is committed to ending anti-Black racism here and that we are prepared to make the systemic changes that are needed. I encourage all Toronto institutions to demonstrate their commitment as well.”

The City says that they recognize the United Nations’ International Decade for People of African Descent, 2015 to 2024, as the decade was established to encourage the international community to recognize people of African descent as a distinct group “whose human rights must be promoted and protected.”

“The goals of the Decade are recognition, justice and development,” the City added.

According to a Destination Toronto visitor survey, the Toronto sign was one of the top three most visited attractions in the city.

Now, it’s easier to clean, is waterproof, and will have enhanced lighting and creative features to support public engagement. Both the Maple Leaf and Medicine Wheel have been retained.

According to the City, they’re using reserve funds to pay for the new sign and existing operational budgets to cover the ongoing cost of maintenance and vinyl wraps.