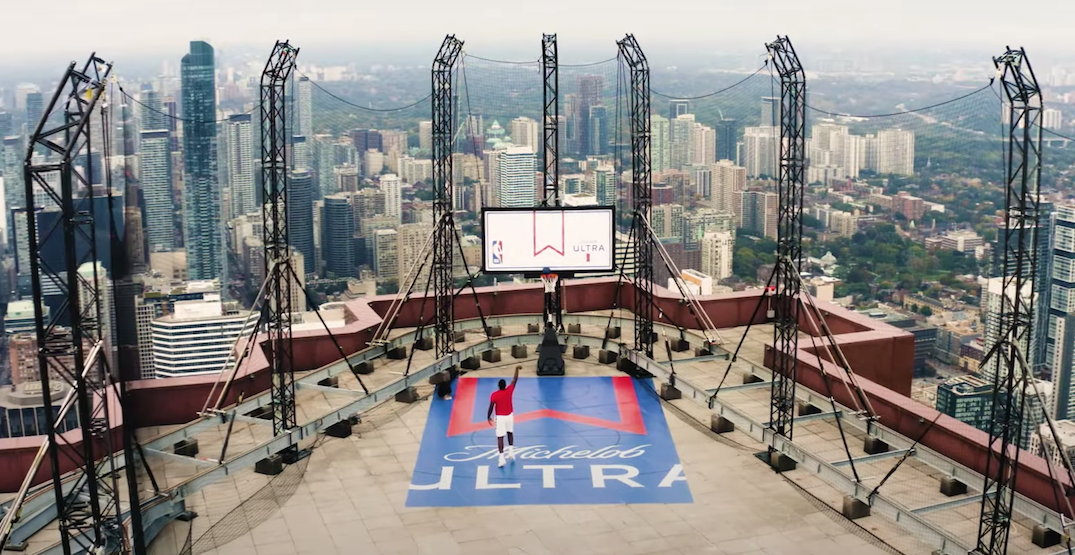 The loftiest basketball shot in Toronto’s history just went down on one of the city’s tallest rooftops.

As part of a multi-year partnership between Labatt Breweries’ Michelob ULTRA beer and the NBA, the drink company chose to kick off the collaboration with an impressive feat: setting up a basketball court on top of Scotia Plaza.

NBA shooting coach Chris Matthews was onsite to be the first to test out the make-shift basketball court in a promotional video released by Michelob ULTRA. Matthews took some pretty impressive shots on the newly-installed net, all while looking over the entirety of downtown Toronto.

Scotia Plaza certainly isn’t the tallest building in Toronto. In fact, it’s the third tallest, with First Canadian Place and the St. Regis both sitting taller. According to Michelob ULTRA, Scotia Plaza has the tallest flat roof not just in Toronto but in Canada, which makes it a more practical choice for a basketball court.

As part of the promotion, Michelob ULTRA is turning its billboards around the city into larger-than-life backboards with actual, useable basketball nets attached to them.

“Basketball lives at the intersection of athletics, culture and entertainment, and we’re excited to bring our fit and fun spin to basketball fans across the country, beginning with our immersive billboards to backboards programming in select cities,” Mike Bascom, Senior Marketing Director of Michelob ULTRA Canada said earlier this month when announcing the NBA partnership.

Michelob ULTRA asks fans of legal drinking age to share photos and videos of their best baskets using #GetBuckets. And if you follow and tag @MichelobULTRACA, you’ll be entered for a chance to win some NBA gear.