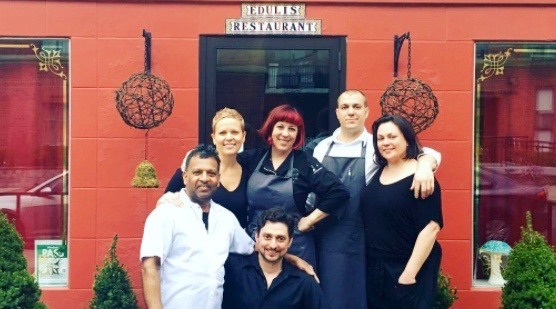 Acclaimed Toronto Edulis Restaurant has publicly replied to a negative review left on restaurant reservation website Bookenda (it’s since been removed), which restaurateur Tobey Nemeth says included “one of the cruelest and most vicious things anyone has ever said to us.”

This restaurant business can be hard. Having a very hard time today. Sometimes it feels as restaurant owners/chefs we do not have a voice when people write cruel things about us. This is my response to one of the most vicious reviews by a guest at Edulis. Can’t shake the terrible feeling it left me with. Sometimes you just want to throw in the towel. It feels like the only thing that would give people like this satisfaction would be to see you go out of business. Perhaps for these online reviewers it’s too easy to forget there are human beings behind every experience. Human beings that are – despite every effort to try to have a thick skin – deeply hurt by negative comments. This affects the psyche of our entire staff. I would also like to say thank you from the bottom of my heart to all the beautiful people who have taken time out of their busy lives to write us kind and beautiful things. Who make our day with their pleasure and positivity. Who literally make us light up when you walk in our dining room. You, also, have no idea how much this means to us.

Posted to the restaurant’s Instagram page, the response to the anonymous review addresses complaints like, “It was cold outside and they would not let us in to warm up. Wanted us to go to the bar next door,” with the defence from Edulis that, “We open at 6 o’clock. Like a bank, or a museum, or a doctor’s office…”

The reviewer also writes that, “The waitress was up-selling us from the moment we walked in the door. We spent way more money than we needed to. And I mean way more.” To which the TL;DR reply is pretty much: TRUFFLE SEASON.

The 16 hour days that the staff of five pours into the job, the investment and the humble ambition to simply “make beautiful food”, not to mention the obvious hurt felt by the restaurateurs is all conveyed in detail in the Instagram post.

If there’s one thing to take away from this ordeal it’s that Edulis makes 5-star food… even the disgruntled guests that hate them can agree to that.