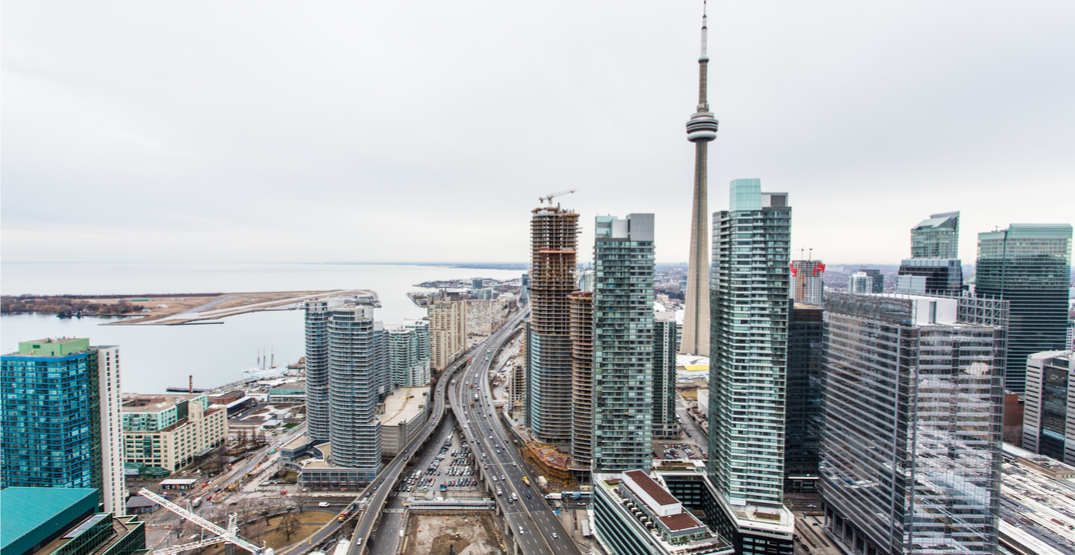 The extremely competitive rental market continues to climb in price in Toronto.

And a new report now states that the pace of new rental supply must double in Toronto to meet future demand.

The RBC Economics report by Robert Hogue, titled “Big City Rental Blues: A Look at Canada’s Rental Housing Deficit” looks at the largest cities in the country and their rental demands.

According to the senior economist, strong demand has pushed rental vacancy rates to “historically low levels and rents are now reaching uncomfortable highs.”

Hogue’s report predicts that the demand will only go up, especially in cities like Toronto and Vancouver where home prices have eliminated the chances of home ownership for many.

But while there is optimism when it comes to rental in places like Montreal and even Vancouver, due to a new wave of construction, Toronto remains a different story.

The report states that the city needs a “deliberate policy to boost rental supply”, with specific targets and incentives to achieve them.

RBC’s economist estimates that as of late last year, the Toronto market had a deficit of 9,100 rental units compared to Montreal and Vancouver were 6,800 units and 3,800 units, respectively. Meanwhile, Calgary had a small surplus of 300 units.

Generally, the rental market is deemed to be at equilibrium when the vacancy rate is 3%. But across the country, strong rental demand has been pushing vacancy rates well below that.

In Toronto, this average is below 1%. 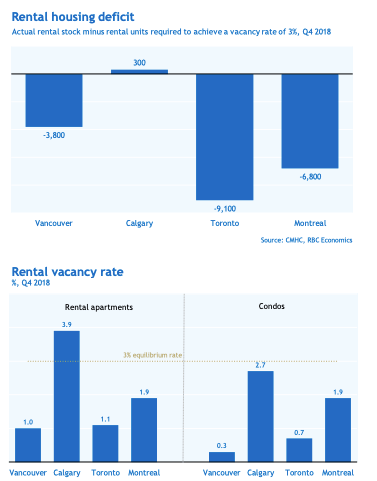 But getting that rate to go up isn’t easy in Toronto, mostly due to in-migration and an increase in renter households because of the cost of ownership.

“Due to the high cost of owning, we project the number of renter-households will increase by an average of 22,200 per year in Toronto,” states the report. “That’s based on household growth staying near recent levels and home-ownership rates continuing to fall.”

RBC estimates for Toronto’s rental stock to reach equilibrium over two years, it would need to expand by 53,500 new rental units, or an average of 26,800 units per year.

“Now here’s the rental supply reality: despite mounting developer interest in rental apartment projects and heavy investor involvement in the new-condo market, the number of new rental units making their way to the rental universe falls way short of what’s needed in Toronto,” said Hogue. “The pace has to at least double.” 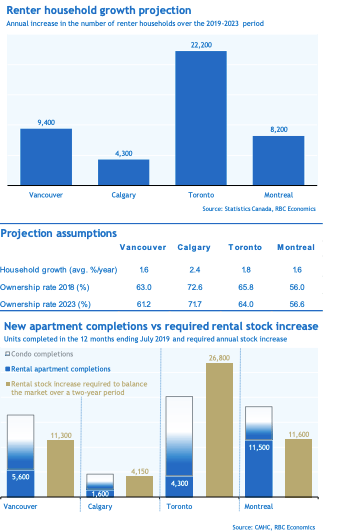 “As it stands, the Toronto area is least likely to eliminate its rental deficit among Canada’s largest markets,” Hogue said in the report. “A more wilful policy approach is needed to foster the rental-supply expansion required to sustainably stabilize rent in the area—never mind offer any hope of improving rent affordability.”