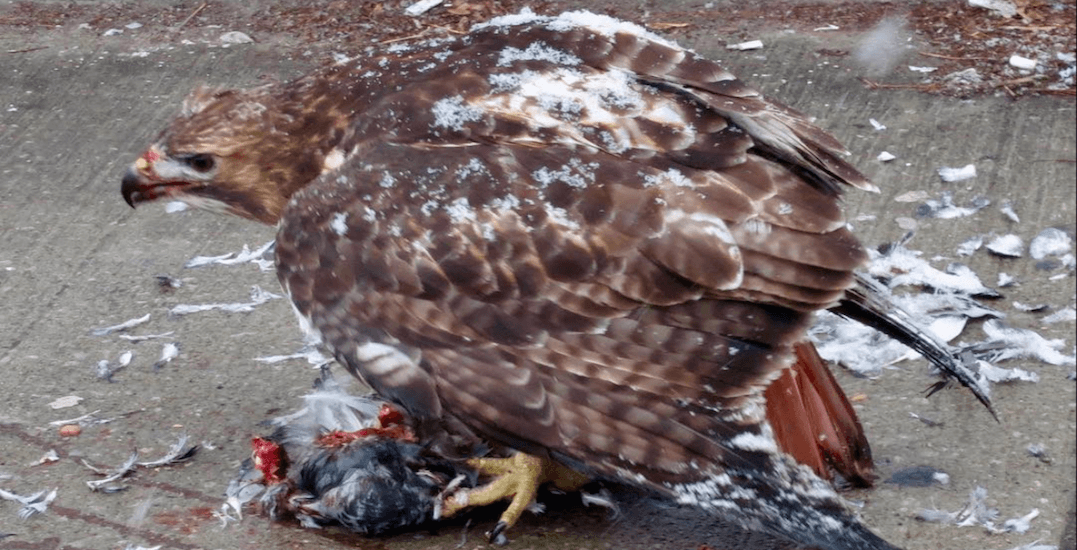 Another day… another hawk sighting in Toronto.

Yes, for once it’s not a fury trash panda spotted in the city, but rather a majestic red-tailed hawk.

Only this bird of prey wasn’t getting into any adorable mischief, rather it was seen devouring a pigeon.

In a video shared on Instagram by Ian Milne, the bird can be seen chowing down on a helpless pigeon near Bellevue, right across the street from the fire station on College Street.

The large bird seems completely unfazed by the people recording it, and only looks up occasionally to chew the chunks of flesh.

Luckily, Milne roped off the little hawk to give it some space, and to prevent  “textwalking zombies from stepping on them,” he wrote in the comments.

According to the Canadian Raptor Conservatory, the red-tailed hawk is a medium-sized bird of prey. It breeds throughout almost all North America from western Alaska and northern Canada and is one of the most common hawk in North America.

The conservatory also added that the red-tailed hawk is carnivorous, its diet is mainly small mammals, but it also includes birds and reptiles.

It’s definitely safe to say keep a close watch on your small pets, otherwise, they could end up as this big guy’s next meal.