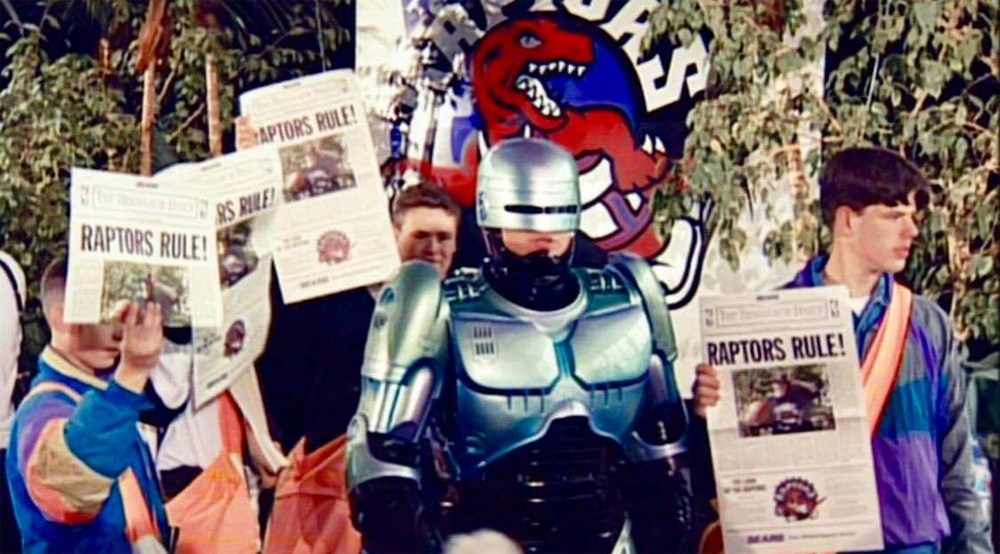 The last few days have felt like a fever dream for Toronto Raptors fans. It still doesn’t quite feel real that the Raps are the kings of NBA. But they are.

Ever since the final buzzer, some crazy things have happened in Toronto as thousands swarmed the streets to celebrate the team’s first-ever title. In the process, the Raptors put out a celebration video and in the process unearthed one of the most bizarre moments in team history.

This might seem like a fever dream itself and looks like it was totally photoshopped, but yes, RoboCop was there for the original Toronto Raptors name and uniform reveal back in 1994.

These images are unaltered; it’s Detroit’s finest police officer being showcased at the Toronto Raptors ceremony. Yes, RoboCop was the Raptors’ hype man.

Back on May 15, 1994, CTV aired a live 30-minute special on their network hosted by Rod Black which unveiled the team name and uniform. Hundreds gathered for the event at the Ontario Place Cinesphere, even though the Raptors name was leaked a few days earlier by various newspapers.

The final three candidates for the soon-to-be-named NBA franchise were whittled down to the Bobcats, Dragons, and Raptors. In a bit of cross-promotion between the Raptors and Orion Pictures, the team called upon RoboCop as their “celebrity cameo” for the event.

Is it just me or does that kid beside Robocop at the Toronto @Raptors reveal event in 95 look like a young Sidney Crosby?

(Guaranteed the first time that sentence has ever been written in human history) #TheCarterEffect pic.twitter.com/GfIsnNa7XN

Why on earth was the RoboCop character — who seemingly has no link whatsoever to the Toronto Raptors — at this event? It’s likely because RoboCop: The Series was shot and filmed in Toronto and Mississauga.

Coincidentally, the “RoboCop: The Series” aired on the CTV network in Canada.

The RoboCop 3 film was released in theatres in November 1993, six months prior to the Toronto Raptors team reveal on CTV. At the time, the RoboCop television series was mid-way through its 23-episode season.

This was probably an attempt by the network and basketball club to cash in on the popularity of the RoboCop film and movie, all while hyping Canada’s first-ever NBA team.

It’s still one of the most bizarre cross-promotions that exists; a professional basketball team with a dinosaur-based logo promoted by a half-man half-android police officer. Further evidence that the 90s were a weird and wild decade.