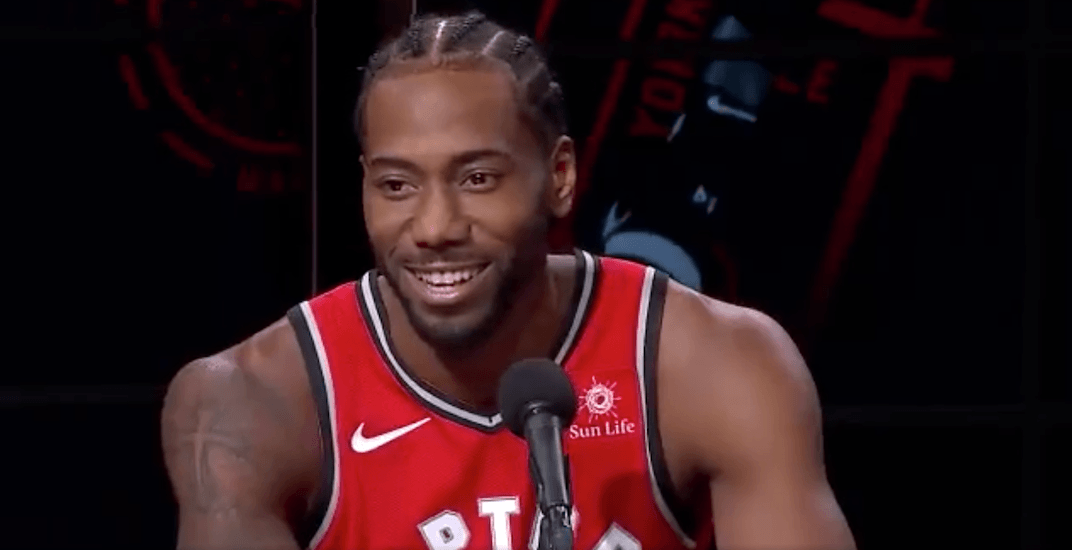 As the 2018-19 regular season comes to an end, the debates around the NBA Awards are starting to heat up.

For the Raptors, Pascal Siakam has emerged as the frontrunner for this year’s Most Improved Player, boasting career highs across the board with a stat line of 16.9 points, 6.9 rebounds, 3.1 assists per game, and a 54.6 field goal percentage.

While Raptors patiently wait to see if Siakam becomes the first Raptor to ever win it, in the spirit of awards season, we decided to come up with our own individual Raptors awards.

They may not have the storied history as some of the NBA’s awards, but their importance should not be overlooked.

So without further ado…

When it was announced that Kawhi Leonard was coming to Toronto, his talent alone was enough for Raptors fans to get excited for their new star player.

But during Kawhi’s introductory press conference, it was his laugh that won the hearts of Raptors fans across Canada.

The laugh heard around the NBA spread like wildfire across social media and reinforced Kawhi’s status as “fun guy.” It was the source of countless memes including this remix of the NBA on NBC’s theme song.

2. Best ‘How Hungry Are You’ Guest: Danny Green

For the past year, Serge Ibaka has tested the tastebuds of unsuspecting dinner guests on his popular YouTube show How Hungry Are You? serving dishes ranging from worms to fish eyes to cow hearts.

While Mafuzzy Chef always seems to have the upper hand on his guests, only one person has gotten the best of him on his own show, and that’s Danny Green.

Appearing with former teammate Jonas Valanciunas, Green brought an unexpected fourth guest to dinner that had Ibaka as nervous as all of his previous guests.

3. Poster Dunk of the Year: Kawhi Leonard on Domantas Sabonis

Back in December Kawhi showed us all that he was getting back to his old self with this thunderous dunk against the Indiana Pacers.

Kawhi will dunk on you. 😨 pic.twitter.com/hoxfi17od6

If you’re going up against Serge Ibaka on the court, don’t get him angry.

As Cleveland Cavaliers forward Marquese Chriss found out, Ibaka is the Raptors’ heavyweight champion and is not afraid to get physical with opponents.

This was one of the toughest awards to decide this year with former Raptor Delon Wright’s 90’s oversized suit and Danny Green sporting CJ’s PJ’s.

But it takes a true fashion visionary to take a classic look and bring it to a new level, which Kyle Lowry has done with his take on the classic headband.

6. Play of the Year: Kyle and Kawhi late-game steal of DeRozan

When DeMar Derozan made his emotional return to Toronto, there was fear that he would repeat his triple double performance that lead to a dominant victory against the Raptors in San Antonio.

With under 20 seconds left in fourth quarter and up by 1 point, DeRozan had the ball stolen by his best friend Kyle Lowry and the player he was traded for Kawhi Leonard, leading to the game winning dunk from Leonard.

In that moment you could feel the cathartic release from Raptors fans as they roared in excitement for their new star getting the best of their old star.

Kyle Lowry and Kawhi Leonard double team DeMar DeRozan and Leonard comes up with the steal and the slam!! pic.twitter.com/mhsVIUeGbF

7. Best Response to a Bad Call: Nick Nurse vs. Denver

Head coach Nick Nurse is not afraid to show how he feels when he thinks the referees have made a bad call.

His most memorable reaction came when a questionable call was made against Jonas Valanciunas in the fourth quarter of a close game against the Denver Nuggets on December 3.

Assistant coach Adrian Griffin had to hold Nurse back after he received a technical foul from referee Karl Lane.