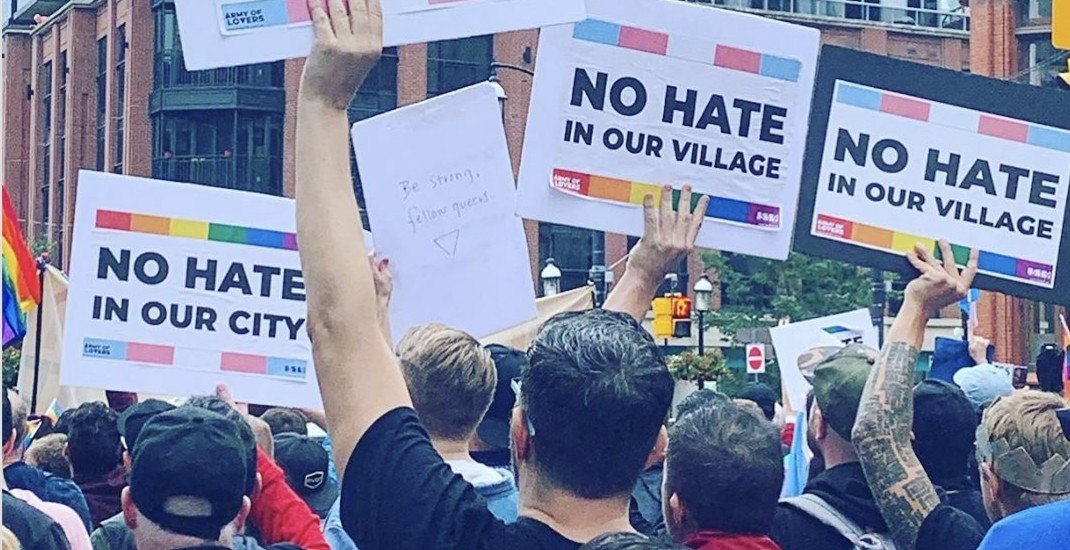 A rally promoting unity and acceptance was held at Barbara Hall Park today in response to an evangelical Christian group’s march through the city’s gay village.

The Christian Positive Space said it organized the Freedom Rally for the “civil rights of Christians.”

#UniteForLove rally was organized as a counter-protest by councillor Kristyn Wong-Tam, the 519 community Centre, and other community groups including progressive faith leaders in order to “resist hate.”

LGBTQ2+, allies, faith leaders, politicians together in Toronto to speak out against hate and #UniteforLove pic.twitter.com/89nqae59hz

My heart is full of emotions today as a Proud member of this @ChurchWellesley community! Today we Rise up to resist hate! Today we #UniteForLove w 20+ faith leaders, elected officials, community groups & hundreds of residents standing together. We won’t be bullied into silence!🏳️‍🌈 pic.twitter.com/xC8CULrGCQ

According to organizers, purpose of the rally was to unite against “rise in the radical conservative right promoting hate, bigotry and violence.”

Mayor John Tory also attended the rally to show his support for the city’s LGBTQ community.

Hundreds turned out in @ChurchWellesley for the #UniteForLove rally. It was powerful to hear from faith leaders speaking in support of #LGBTQ2S rights. They recognized historical harm inflicted by the church and offered apologies. When we come together, love always wins. 🏳️‍🌈💗 pic.twitter.com/vepcW7bsEv

Standing with our LGBTQ2S+ community this afternoon at the #UniteForLove Rally. In Toronto, diversity is our strength. When people seek to divide us – we come together and stand as one. pic.twitter.com/loZtPzHzdr

A post shared by Church-Wellesley Village (@churchwellesleyvillage) on Sep 28, 2019 at 9:47am PDT

“The City of Toronto prides itself on being a safe and inclusive city for all. I stand with the LGBTQ2S communities in Toronto and understand their concerns, along with their allies, ahead of this weekend’s march which I believe to be an unnecessary provocation,” Tory said in a statement on Friday.

According to Wong-Tam, “hundreds” of people turned out for the #UniteForLove rally.

“It was powerful to hear from faith leaders speaking in support of #LGBTQ2S rights. They recognized historical harm inflicted by the church and offered apologies. When we come together, love always wins,” she said.