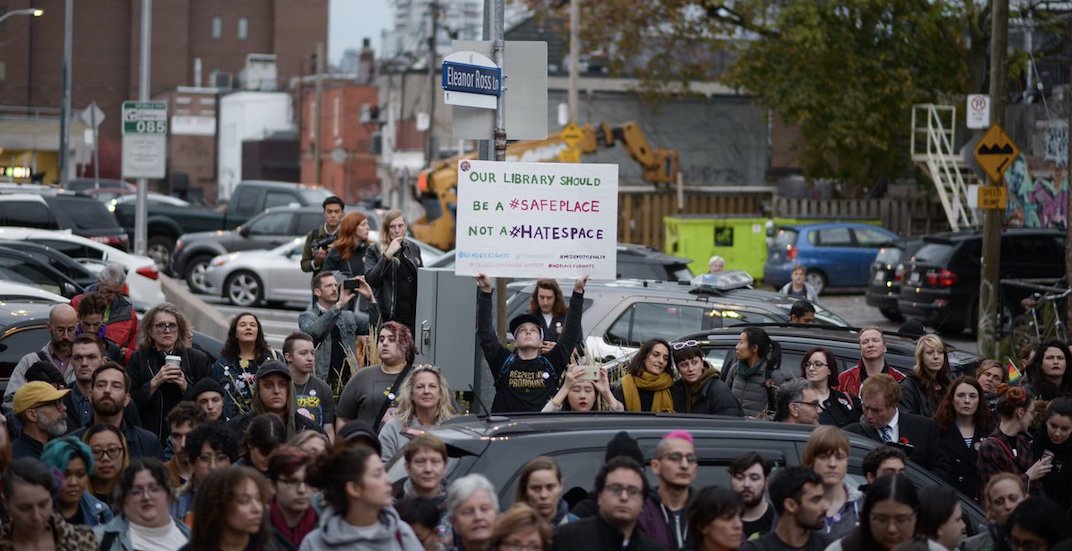 Murphy, a freelance writer who runs the website “Feminist Current” and has publicly argued that trans women endanger cis women, was speaking about gender identity, despite heavy backlash from the public.

An online petition was started ahead of the event and garnered nearly 9,000 signatures,  calling out the library for providing a platform for Murphy to spread “hate speech.”

Started by authors Alicia Elliott, Catherine Hernandez, and Carrianne Leung, the petition says the publishing professionals who sign it will no longer participate in events at the library if the talk is allowed to happen.

“We are shocked that our public institutions we hold in regard would allow Murphy to have a platform while purporting to uphold community values. More than that, we feel betrayed,” the petition reads.

“Offering Murphy a platform means denying the resources and promise of safe and equitable space to trans communities.”

Ahead of Tuesday’s talk, which was entitled: Gender Identity: What Does It Mean for Society, the Law, and Women?, a massive group of protesters gathered outside the library, many holding signs and chanting.

This was such a powerful night. WHOSE LIBRARY? OUR LIBRARY. #TakeBackTPL https://t.co/VIlhL47scR

Murphy speaks in 15 minutes inside. There are currently 11 police officers outside the library and more inside – the officers outside couldn’t tell me how many. Here is a video of the crowd.#TOpoli pic.twitter.com/FbR5YeNcwK

Members of Pride Toronto were also in attendance and commented on the crowd that came out to declare “no to hate.”

What amazing turn out tonight to declare no to hate. #prideto pic.twitter.com/2qJLurx7Iq

From videos shared on social media, you can hear protestors booing and cheering as people left the event, as security and police escorted them out.

Prior to the event, library officials said they would allow the event to happen on the basis of free speech, a move criticized by some, including Mayor John Tory.

“As a public library and public institution, we have an obligation to protect free speech,” City Librarian Vickery Bowles wrote in a statement earlier this month.

“The community is asking us to censor someone because of the beliefs they hold and to restrict a group’s right to equitably access public space and we cannot do either. Doing so would also weaken our ability to protect others’ rights to the same in the future.

Tory said he was “disappointed” with the library’s decision to move forward with Murphy’s event and that there were “thousands of places” in the city where the talk could have taken place.