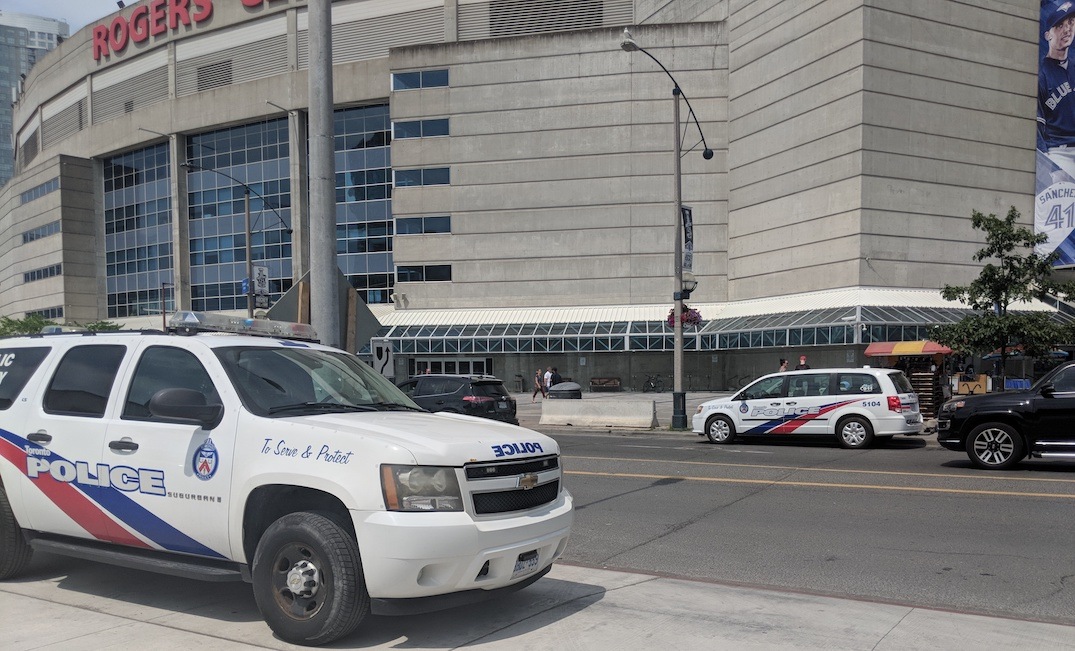 Following an unsettling afternoon in the city, after police received a tip about an “unconfirmed piece of information“, Toronto police have resumed “normal operations.”

On Thursday, there was an increased police presence in the downtown core, predominately around the Rogers Centre, Ripley’s Aquarium, CN Tower, and Scotiabank Arena.

Police have since responded, saying their increased presence was to “mitigate the potential risk to public safety.”

Police said they are aware that heightened security can be a concern for the public, but their goal is to always be “as transparent as possible” while protecting the integrity of their investigation.

While police have resumed their normal operations, the public will still continue to see a police presence around the Rogers Centre as part of the 2018 downtown security plan.

This comes after a leaked police memo stated a credible threat regarding “a potential vehicle ramming attack in the area of the CN Tower on Thursday, July 12” began circulating in the media.

The memo, shared by numerous media outlets, also included the police’s action plan to protect the area around the popular downtown destination.

#BREAKING EXCLUSIVE: A police source tells NEWSTALK 1010 a vehicle ramming attack threat was made in the area of the CN Tower. #Toronto pic.twitter.com/dGGLzV9E2N

“Intelligence Services has not received any information regarding a specific criminal extremist threat to the city of Toronto,” read the memo. “However, critical infrastructure, transportation hubs, and area of large public gatherings remain as targets for lone-actors and/or terrorist/extremist groups, and their sympathizers who wish to stage high-profile attacks.”

While the note also said that “a heightened vigilance in these areas for suspicious behaviour, including pre-incident indicators, may deter criminal and extremist activity .” Toronto police said that the memo was a draft that was never approved, despite it being exactly what took place earlier in the day.

“Our officers were provided with most up to date/accurate info this morning, as was public. Our current policing response in the downtown core is appropriate based on the info we have,” tweeted Toronto Police.