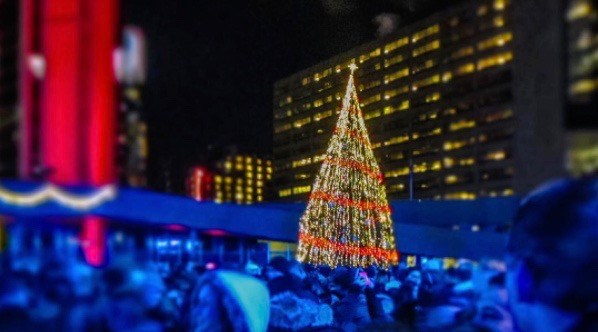 Nathan Phillips Square is the place to be in Toronto this weekend.

Not only is the skating rink opening for the season tomorrow, but the Cavalcade of Lights is taking place, meaning live music, fireworks, a DJ skate night, and – you guessed it – the lighting of Toronto’s ‘official’ Christmas tree.

Trust us, with more than 700 individual ornaments and 3,810 metres of LED lights wrapped around the 60-ft white spruce, you’re not going to want to miss it.

According to the City of Toronto, it takes two weeks just to decorate and string the lights on the tree.

Well, when you’re there tomorrow night with thousands of other Torontonians as the city’s official Christmas tree is lit for the first time, you’ll know it was worth all that hard work.

Just look at what last night’s lighting of the biggest tree in Canada was like at the Eaton Centre and you’ll get some idea of what you’re in for: